Teaching students to be global citizens 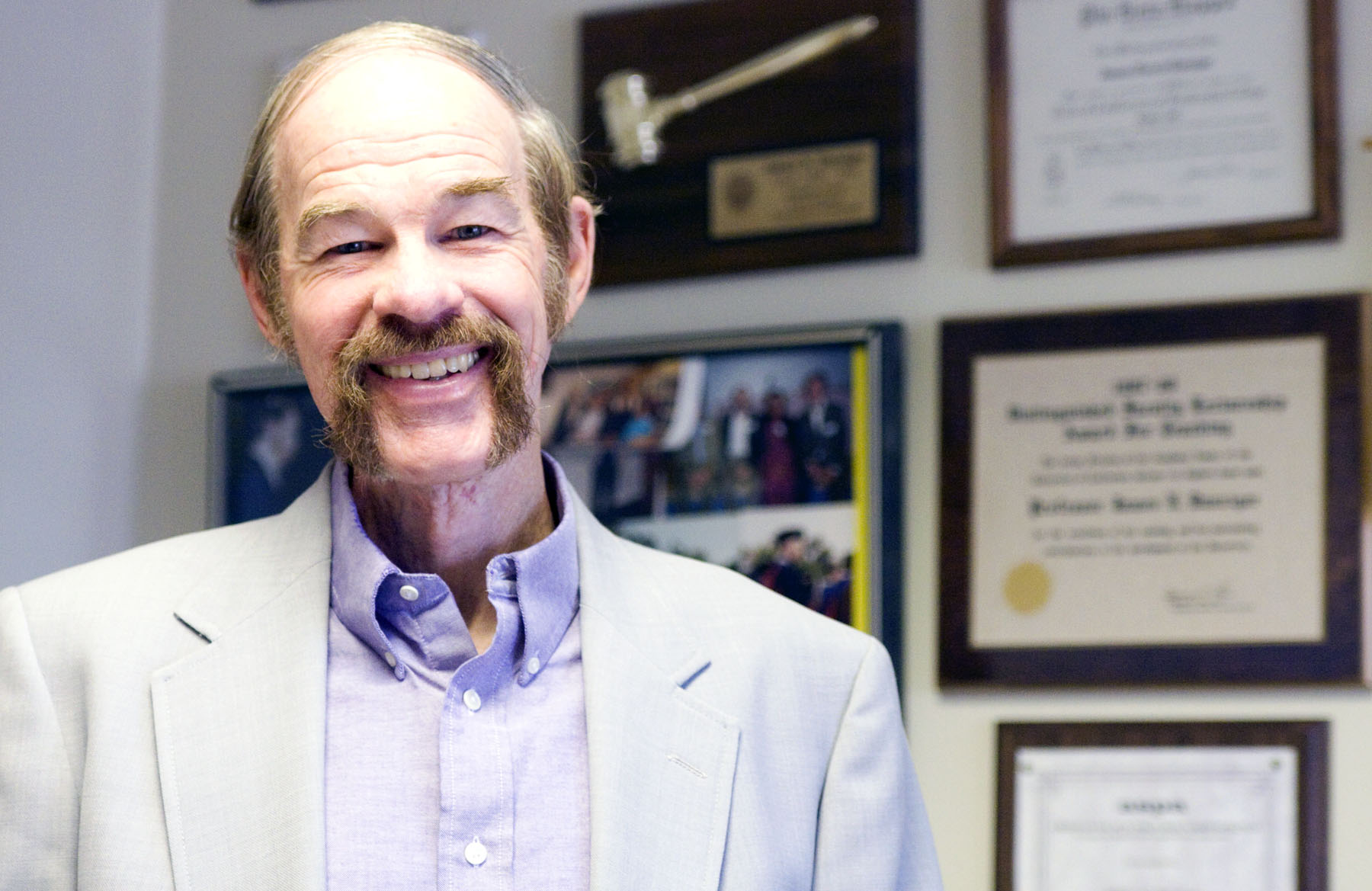 Teaching students to be global citizens

If political science research professor Jim Danziger had been born centuries ago, he might have been an explorer.

He has, after all, visited more than 50 countries - 14 just this past year alone while serving as a core faculty member aboard a 590-foot cruise liner for the Semester at Sea program. His research on information and communication technologies which began more than 25 years ago was considered a leap into unchartered territory - a venture which has proven invaluable given their pervasiveness in our lives today. His textbook, Understanding the Political World, now in its 9th edition, is considered pioneering for its macro, world view approach to teaching introductory political science, and he has, on more than one occasion during his 37 year tenure at UCI, been hailed as a trailblazer for his ability as an administrator to garner consensus among competing crowds.

This year, the Alumni Association has recognized Danziger's career-long university-wide contributions by naming him the 2009 Lauds & Laurels Extraordinarius. Considered the UCI Alumni Association's most prestigious honor, the award recognizes "those extraordinary individuals who have prominently contributed to the advancement of the UC Irvine campus and support the university's fundamental missions of teaching, research and public service."

"Jim is a man of all seasons," says William R. Schonfeld, political science professor. "He is a first-rate scholar, arguably the best teacher on campus, a long-serving administrator who has had an important impact, and a profoundly decent, moral, caring human being who is a role model for us all."

"Jim's defining quality is his passion for optimizing the whole university experience for students," says Manuel Gomez, vice chancellor for student affairs who worked closely with Danziger when Jim was dean of UCI's division of undergraduate education. As dean, Danziger created the UCI branch of the UCDC Washington Academic Internship Program which he still directs today, along with developing the Undergraduate Research Opportunities Program and multiple initiatives aimed at helping undeclared majors find focus.

"Jim is one of those rare individuals whose devotion to students has led him to make contributions at every level of the university, from leadership roles in administration to his very popular and thought-provoking lecture classes for undergraduates," says Barbara Dosher, School of Social Sciences dean.

In his administrative roles as division of undergraduate education dean, chair of the UCI academic senate, and department chair, he was known for his collaborative leadership style. Barbara Bertin, a UCI senior administrator for more than thirty years, notes "the characteristics I most admire about him that have made him such an outstanding leader are his vision for maintaining excellence at UCI, his belief in participatory democracy and his valuing the individualJim excelled at dealing with people and finding solutions."

That same commitment to undergraduate education has not wavered in his nearly four decades of service on the UCI campus.

Through the many courses he has taught, including the largest introductory political science course which he has he has taught for nearly three decades and one he continues to teach despite his official retirement in 2007, Danziger estimates he's reached more than 18,000 students, many of whom he stays in contact with today.

"I love teaching the intro course because I get to show students the full range of what political science is all about, the way political scientists think, and the nature of the contemporary political world," he says.

"UCI is a special place," he adds. "When I discuss the politics of various countries, I know there are students sitting in my classroom with close ties to each of the countries I'm talking about, and they will have opinions on my comments."

His experiences and anecdotes from traveling all over the world are an integral part of his lessons and global perspective teaching philosophy, something he not only teaches his students, but puts into practice for himself. His worldly view of politics and their importance comes from his original interest in British politics, a topic the Los Angeles native studied after completing his undergraduate degree at Occidental College and spending two years in Britain on a Marshall scholarship. It was there, he says, where he discovered two new loves - travel and his future wife, Lesley. When he returned to the states to further explore political science in graduate school, earning a Ph.D. from Stanford, he focused on British politics so he could, as he somewhat jokingly says, "find anyway I could to get back to Britain."

He came to UCI in 1972 where he has spent his entire career, and his influence can be seen in countless student success stories, many of whom attribute large steps in their paths to Jim's guidance and mentorship. Phillip Rudolph, class of 1980 and current senior vice president and general counsel for Jack in the Box, is one such former student who notes Jim's role in "driving in me a passion that persists to this day for learning, for teaching, for writing, and for excelling in everything that I apply myself to, and perhaps most importantly, he instilled and fostered an insatiable curiosity - a hunger for learning."

Mike Segawa, a '79 Anteater alumnus who was the first in his family to go to college, remembers Danziger's "passion for scholarship and infectious enthusiasm that made the academic enterprise engaging, exciting, fun and stimulating. He was student centered before most of us in the academy knew the meaning of those words." Now the vice president for student affairs and dean of students at the University of Puget Sound, Segawa is extremely grateful for the mentorship Danziger provided. "He was instrumental in the direction and quality of my life and in the life of the institution we all love."

Danziger's efforts as a teacher have been widely recognized at UCI over the years, most notably with the Lauds and Laurels Distinguished Teaching Award in 1979, the inaugural Academic Senate Distinguished Faculty Lectureship Award for Teaching in 1987 and the Teaching Excellence Award for Social Sciences from the UCI Division of Undergraduate Education and Academic Senate Council on Student Experience in 2005.

"It's really been a pleasure working with so many wonderful students," he says.

Equally rewarding, he says, is the research side of his work, which shifted more than 25 years ago from a focus on organizational decision-making and British politics to include the relatively new area of information and communication technologies.

"When I first got into this field, it was quite undefined and many political scientists looked at me like I was a little crazy to take an alternative study route in this unchartered area," he says.

One of his first published studies which came out in the 1977 issue of Public Administration Review looked at the way new technology was being used by local governments. It was named Best Article of the Year by the prestigious journal.

"Back then, many people posited grand ideas about how technology was rapidly changing everything. We studied what was really happening in many actual settings and found that the short-term impacts were far less substantial than many claimed," he says. The longer term, however, has been a different story, he notes.

"ICTs have now become deeply embedded in the actions of many people and organizations, from our use of computers and cell phones to GPS and satellite communication," he says.

In a recent study that he headed as part of a $2.8 million grant from the National Science Foundation, he found that instant messaging in the workplace - a technology that hadn't existed when he began researching ICTs - is not as interruptive as many employers suspected. He found that IM allows workers to get more accomplished on the job as they use the technology to get quicker answers to specific questions and avoid more disruptive forms of communication such as phone calls, e-mail and unexpected office "drop-ins" that generally take up more of their time. His findings made their way from academia to mainstream press including major newspapers, blogs and the October 2008 issue of Shape magazine, a point of pride for Danziger who notes "it's always nice to see your work being read outside the academic community."

Within the academic community, he's known internationally as the author of more than 60 journal articles and three books, and for his role in helping to put UCI on the map as the "Irvine School" of social analysis of information technology, according to colleague and UCI business professor Kenneth Kraemer.

"Danziger and his colleagues initiated a program of research in 1974 into the social and policy impacts of information technology that has become a model for research into the societal implications of information and communication technologies worldwide," Kraemer says. He adds that the model has been used to create similar programs at universities including Carnegie Mellon, Indiana and Michigan.

Says Danziger: "Research on the impacts of information and communication technology is constantly evolving and it's gratifying to see how it's changed and know that I was able to be involved at the ground level." He adds that he feels extremely fortunate to have been able to pursue "such interesting and diverse topics because the School of Social Sciences at UCI really fosters an innovative, interdisciplinary research spirit that allows us to study both the old and the unchartered terrain."

Somewhere between his career's work at UCI as a teacher, mentor, researcher and administrator, Danziger found time to help raise two children, coach and referee youth soccer, keep up his love for basketball, and get involved in the politics of both South Laguna Beach - where he led the annexation drive - and UCI's University Hills, where he was on the ICHA Board of Directors for eight years.

When asked if he plans to make any changes since he is now retired, the modern day explorer says he plans to travel a bit more with hopes of venturing to a few new countries he's not yet visited, but he won't stray far from campus for too long.

"I've been doing what I love for the past 37 years and I don't see that changing."