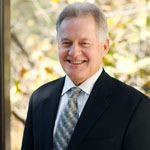 A Newport Beach resident and transfer student from Orange Coast Community College, he was one of UCI's inaugural 1,500 students.

"There was a lot of excitement back then about 'the new university,'" he says. "For me, the excitement and ultimate decision to attend UCI was due to the research-oriented focus that I knew would come with a UC school being built adjacent to a very progressive and innovative area."

He majored in economics under founding UCI faculty members and mentors Duran Bell, economist, and James March, social sciences dean, where he studied the impacts of social, political and economic policies on society with a focus on underserved populations. He graduated in '67 and continued pursuing his research interests at California State University, Long Beach where he completed his MBA in 1970 and at UCLA where he obtained a master's in public health with a specialization in hospital administration in 1971.

The following year, he was hired as assistant hospital administrator for SVMHS where he has been ever since, taking the full reigns as president and CEO in 1985.

In his 37-year career with SVMHS, Downing has been credited with leading what was once a small rural hospital in an agriculturally dominant area of California to a nationally recognized 269-bed advanced healthcare center with many satellite facilities.

His interest in and commitment to technology-driven healthcare research has led to key partnerships with Toshiba American Medical Systems, Stanford University, Lucile Packard Children's Hospital and NASA, collaborations which led SVMHS in 1998 to become the only community hospital in the United States to have a Space Act Agreement for research with NASA.

"The partnership with NASA made it possible for a pediatric cardiologist at the Cleveland Clinic to give a live diagnosis to a heart patient back here in California without either one having to travel across the country," he says. "It's quite impressive how we're using satellite systems to improve healthcare here and internationally."

An avid proponent of education and creating opportunities for entry into the rapidly growing healthcare industry, Downing supported creation of the hospital's Summer Health Institute internship program as well as the Medical Adventure Camp and Health Career Pathways Program through which he encourages and impacts student interests in the healthcare profession. He also helped bring a bachelor's and master's program in nursing to Monterey County through a partnership with California State University, Dominguez Hills, allowing nurses to earn advanced degrees without having to travel to a major university.

"It is no exaggeration to say that Mr. Downing has helped to shape the healthcare landscape in our state," writes C. Duane Dauner, president of the California Hospital Association where Downing has held several leadership positions.

His efforts to advance healthcare research and access among rural populations have crossed international borders on multiple occasions through his volunteer work with Assist International and Rotary International. Downing, his wife and a team of physicians, specialists and technicians travel annually to remote places in the world installing medical equipment and training doctors, nurses and technicians how to operate the equipment. Their work has ranged from building a small hospital in South America to setting up advanced ultrasound equipment and intensive care unit monitors in rural areas of Africa, Eastern Europe and Asia.

"It's remarkable the difference we can make in such a short period of time," Downing says. "What we would take four months to do here in the U.S., we're able to get done in other parts of the world in less than a week."

Education is an integral piece of their work, he adds. In addition to providing donated equipment and training on how to properly operate it, Downing helps conduct educational seminars addressing key topics on healthcare in the 21st century.

His work, writes Robert Pagett, Assist International president, "has brought peace and understanding and a sense of hope wherever he has been overseas."

"Mr. Downing has devoted his life to improving healthcare for others, whether in the region where he has spent his 40-year professional career or around the world where he has led humanitarian missions to underserved populations," writes Dr. Richard Villalobos, Salinas Valley Hospital physician and fellow UCI alumnus.

Through it all, the Anteater alumnus has continued to sing the praises of his undergraduate UCI alma mater, encouraging Salinas locals like Kyle Marscellas who interned with Downing for two years in high school, to come to Irvine. He went so far as to drive the teen to campus, where he took him on a personal tour showing off his inaugural class plaque located outside Langson Library.

"Sam's mentorship as an administrator showed me there was another side to healthcare and his international work had a big influence on why I decided to major in international studies," he says.

At the hospital, Downing has hired fellow UCI alumni by the handful and counts several dozen former Anteaters among his current staff of 2,100 employees.

"As an alumnus, Mr. Downing carries with him - at home and around the world - the values that were instilled in him during the formative years of his college education," says Villalobos. "By any measure, he has lived a life in such a way that reflects well on UCI."