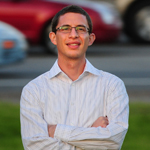 Hymel studied data on traffic delays in major metropolitan areas in the U.S. between 1982 and 2003. He observed that increases in the number of vehicles on the road far outpaced expansions in highway capacity, resulting in high levels of congestion. While studying the causes of traffic congestion, Hymel became increasingly interested in identifying its broad economic costs.

"In our current economic climate, people are concerned with creating jobs and taking steps to sustain long-run employment growth," Hymel said. "My study shows that reducing congestion - itself a desirable outcome - can help achieve that goal and revitalize urban economies."

Hymel analyzed the amount of extra time drivers spent on freeways each year due to congested conditions and examined population, employment and income growth patterns. He found that if freeway capacity in the Los Angeles metropolitan area (including Long Beach and Orange County) had increased by 10 percent in 1990, an additional 50,000 jobs would have been created in the region by 2003.

Public infrastructure spending is expected to boom in a Barack Obama administration, as the President-elect recently proposed massive public works programs to resuscitate the nation's ailing economy. Jan Brueckner, UCI economics professor and an expert in urban economics, said policy makers would be wise to pay attention to Hymel's findings.

Hymel, a fellow of the UC Transportation Center, encountered some difficulty measuring the impact of traffic congestion on job growth since the two tend to go hand in hand.

"Workers cause traffic jams just by driving to work everyday, but at the same time congestion discourages job growth by raising the cost of doing business," Hymel said. "Individuals will demand higher wages to compensate for longer commutes. Also, slow traffic harms businesses by increasing the cost of shipping goods."

Hymel will receive an award for his research on planning and policy issues from the Council of University Transportation Centers at a Washington, D.C., award ceremony this month.

He hopes his research will inspire policymakers to think more creatively about reducing congestion. While not politically popular, he says toll roads, congestion tolls and other options that require people to pay for the privilege of driving are the best options.

"There are no simple solutions to the problem of traffic congestion," he said. "New roads are very expensive and are not likely to reduce congestion levels."