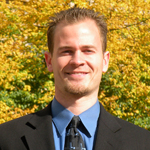 As last year's fraternity president, Winans even started a program to encourage his fraternity brothers to study more.

In fact, membership in Sigma Alpha Epsilon shaped Winans into a young leader - one whose contributions to the campus and inspiration to fellow students earned him the 2008 Living Our Values Award. The awards are given annually by Chancellor Michael Drake to staff, faculty and students whose actions best embody UCI's values of respect, intellectual curiosity, integrity, commitment, empathy, appreciation and fun.

"Mitchell has gone above and beyond to contribute to UCI's campus life," writes Rachel Marie Bell, a former resident adviser for Arroyo Vista Housing, in her nomination letter. "Through his leadership and involvement, he has touched the lives of students across campus."

When Winans joined the fraternity, he was fresh out of high school - where football was his only extracurricular activity. "I was a jock," he says with a laugh. "But when I came to UCI, I was influenced by my older fraternity brothers, who were active on campus. They inspired me. That was the catalyst."

From then on, Winans was all over campus "making a difference," Bell says. He worked for the UCI Bookstore and UC Irvine Extension, and served as Arroyo Vista Student Council chair and Student Parent Orientation Program volunteer.

He was student coordinator of the Dean of Students' Administrative Internship Program, in which students work under the guidance of a campus administrator to gain practical experience and leadership skills. His program mentor, Center for Service in Action director Darlene Esparza, helped him develop a commitment to community service, he says.

While focused on service and studies, Winans had time for fun. His senior year, he was elected Homecoming King and Greek Man of the Year.

"I attribute a lot of my success to the student organizations, the people I worked with and friends I made at UCI," he says. "They really shaped me."

Winans developed an interest in a public service career in summer 2007 while working for the U.S. Chamber of Commerce through the UCDC Internship Program, and later became program coordinator. After getting his bachelor's in political science with a management minor, he returned to Washington, D.C., to work as a contract specialist for Homeland Security.

"UCI provided me with the perfect environment to experiment and try new things," he says. "I learned so much, in the classroom and beyond."