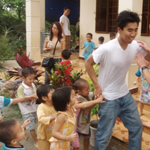 "Anh! Anh!" The greetings of the Vietnamese children - meaning both "mister" and "older brother" - from inside the small, dirt floored school in Long An, Vietnam brought both a smile to Jerry Nguyen's face and a change in his life's direction.

Last year, the fourth year biological sciences major and Jumpstart corps member travelled to Vietnam with a volunteer medical outreach program. While there, he and others learned about medicinal practices in the third world country and visited schools and orphanages to pass out donations and scholarship money collected throughout the year.

It was the latter experience, coupled with his prior work in Jumpstart, he says, that really hit home.

"One of the schools we visited was in a really rural area where boat travel was the most accessible way to reach the site," he says. "The fact that these students still showed up to school each day really showed me how much they wanted to learn."

Before the two-week trip was over, the volunteers had run out of scholarships, school supplies and prizes to give to the eager school children. To keep the smiles coming, Jerry handed over his own backpack and watch to be given away as prizes.

He went a step further upon returning to the U.S. and donated more than $1000 of his own money for future scholarships - enough to fund the education of 18 Vietnamese students.

"Being in the schools and orphanages, meeting and playing with the children - something just clicked," he says. "They called us 'anh' out of respect, but I felt more like an older brother to them and wanted to do more."

The son of Vietnamese immigrants, Jerry grew up in a low-income neighborhood of Long Beach in a household where very little English was spoken. It wasn't until he entered school when his language skills really took off.

Getting involved with UCI's Jumpstart - a national outreach program with a site station in Social Sciences aimed at helping pre-school students develop language, literacy and social skills - has allowed him to educationally impact children's lives in Orange County, and was a catalyst for his decision to provide similar opportunities to the children he encountered while in Vietnam.

Now in his final year as an undergraduate at UCI, Jerry's career focus has changed from medical school to school counseling, and he continues to be one of Jumpstart's more active members. As one of this year's 92 UCI Jumpstart students - officially called corps members - he is paired with low-income pre-school students in Costa Mesa and Santa Ana with whom he plays games, reads books, sings songs, and participates in other group activities designed to help them improve the same skills he struggled with when he first started school. The program also promotes family involvement in students' educational goals and achievements by keeping parents updated on progress and providing activities they can work on together at home.

"Jumpstart helps students succeed by providing hands on, one-on-one assistance in communities that have high student to teacher ratios," says Jessica Oh who co-manages UCI's Jumpstart site with John Harmon. "The need for a program like this in low income areas of Orange County is great."

UCI's site station, championed by cognitive scientist Virginia Mann, has provided mentors to nearly 500 pre-school students since its inception six years ago. Nationally, nearly 15,000 children across 20 states are being reached through the program this year.

For Jerry, Jumpstart provides an opportunity to make an educational impact on children's lives close to home - an experience he finds extremely rewarding and one that continues to bring both a smile and a sense of purpose to his life's new direction.