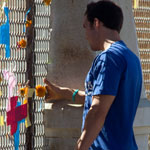 It's one thing to learn about the U.S. Mexico border - its history, security issues, economic and political impact on relations between the two countries - in a classroom. It's something entirely different to see it, feel it and experience it in person, says Ricardo Chavira, veteran journalist and social science lecturer.

Over the last two weeks, he has taken students from his "U.S. Mexico Border Perspectives" course down to the small restricted strip of land that separates Mexico from the U.S. where they had the rare opportunity to interview and ride along with Border Patrol agents and learn firsthand about security issues impacting the southern U.S. boundary.

"Few classes are so accessible to real life, tangible experiences," says Chavira who has written about U.S. Mexico relations and border issues for Times magazine and the Dallas Morning News for the past 30 years. "We have the opportunity to literally see and feel what we're learning about in the classroom, and it's less than a two hour drive away."

Upon their arrival at the U.S. Customs and Border Protection's San Diego Sector, the students received a rundown on the history and objectives of the U.S. Border Patrol from agent Julius Alatorre who explained the agency's role as "gaining, maintaining, and controlling the border." He hit upon a number of key issues the students have been studying in class, including both increased violence and cross-border drug activity within the 7,000 square mile area under the San Diego Sector's charge, points punctuated with official statistics showing an increase from .005 pounds of cocaine confiscated in 2007 to 699 pounds in 2008. Marijuana confiscated by the agents was also up nearly 11,500 pounds from 37,459 in 2007 to 48,935 in 2008, according to Border Patrol statistics.

Students viewed a video highlighting the decline of mass border crossings since the launch of the controversial Operation Gatekeeper in 1994 and learned how technology such as night vision goggles and seismic sensors are being used to patrol more area along the border. Students got to see firsthand a number of methods used by the agency to stop unlawful crossings - including spike strips and the newly applied razor wire that can be found on several stretches of the San Diego Sector border fence - before they headed out in vans to see the fenced and barricaded area for themselves.

For some, the trip was a first and provided an eye opening experience into the real life issues they've been learning about over the past few months. For others who have traveled through the border in the past, the experience gave them an opportunity to view the region from a different angle.

"It was really interesting to see the area and hear the border agents' perspectives on violence in the region," says Kaitlin Morrow, third year social ecology major. She vacationed in Mexico often as a child, but her family quit going when news stories on violence in the region became more frequent. While Border Patrol statistics confirm that violence has increased, she feels there is a human side of the story that isn't being told. "I feel like the media and those responsible for security talk about the violence, but don't tell the story of families struggling just to make a life." She says she left the trip with a better perspective of the security issues the agents at the border face, but feels that border issues encompass much more.

"Before going on the trip, I didn't know what I thought about a fence being the only thing separating the U.S. and Mexico," Marciel says. "Seeing it and hearing about how many people still try to cut through and tunnel in has given me a better perspective on the issues we face at the border."

Randall agrees, saying he was quite surprised at the number of people who are still attempting - and many succeeding - at crossing the border in an area as heavily secured and patrolled as the Tijuana border. As a frequent volunteer at an orphanage across the border in Mexico, he was glad to have the experience to see parts of the border he's never been able to visit before and adds that he wishes more classes provided such a unique experience.

The students, who received extra credit for taking the trip, brought their experiences back to the classroom for those who were unable to attend through presentations of their findings.