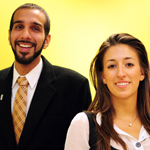 When Moran Cohen visited Israel and Palestine in September with 13 other UC Irvine students as part of the campus-based Olive Tree Initiative, she went places she never dreamed she'd visit. She grew up in Israel and believed that Israelis aren't supposed to go to the West Bank.

Cohen, however, was determined to see the Middle East conflict from a different point of view. So, when the group visited the Palestinian city of Hebron, she nervously accompanied the students through the Muslim quarter.

"It destroyed my previous misconceptions and helped me see the situation in a new light," says Cohen. "The city was bustling, filled with shoppers. I learned you can't be scared - they're just people like us."

Getting people with differing ideologies to come together and talk about the Middle East conflict is a goal of Olive Tree Initiative, founded by UCI students in 2007. Because of their role in the initiative, Cohen and Ali Malik received the XIV Dalai Lama Endowed Scholarship, which recognizes UCI students committed to ethical leadership on campus and in the community.

"Our group has students from all different backgrounds," Cohen says. "We're able to hear different points of view and respect them, even if we don't necessarily agree with them."

During a two-week visit to Tel Aviv, Jerusalem, Ramallah, Hebron, Bethlehem, Haifa and other cities within Israel and Palestinian territories, the students talked with academics, community and religious leaders, and activists.

"We talked with Israeli and Palestinian students our own age and parents from both sides who have lost children," Cohen says. "It helped me better understand both the conflict and myself. It's not just that one side is right and the other is wrong. I learned the most important thing is dialogue."

Cohen and Malik will use their scholarship - which includes individual awards of $7,500 and $2,500 to share - to foster more conversations on the conflict. They participated in Olive Tree Initiative's first public forum Oct. 23 before a packed crowd in the Crystal Cove Auditorium, and they hope to do more at local mosques, synagogues and campus venues. They also want to recruit new initiative members and organize another Middle East trip next fall.

Cohen moved with her family to the U.S. from Israel at age 12. After enrolling at UCI, she became active in campus clubs, joining Anteaters for Israel and becoming a board member of Hillel.

"It's a way to connect with my identity," she says. "I have a great passion for Israel and being Jewish and going to synagogue."

A second-year business economics major, Cohen plans to be an accountant, but since the trip she's also considering international studies and a diplomatic career.

"Olive Tree has helped me become more of a leader and made me want to educate others," she says. "It's opened my eyes to perspectives on both sides that I never knew existed."