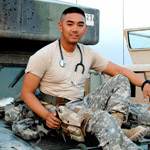 Michael Flores was eager to return to life as an Anteater after serving as a medic in the Iraq War. After evading improvised explosive devices and surviving 20-hour combat missions across the desert, he felt confident taking on the demands of biology and international studies courses.

However, an entirely new set of challenges awaited Flores on campus. To his dismay, some fellow students were disinterested in the Iraq and Afghanistan wars. He felt isolated and lonely at times.

"War is an ugly thing and people don't want to talk or think about ugly things," he said. "I wanted to talk about my experiences and have conversations about the war, but people seemed more interested in Britney Spears' problems than what is going on in Iraq."

Flores' journey from student to soldier started after the terrorist attacks of Sept. 11. The Staten Island native was in New York when the towers fell and enlisted in the Army National Guard soon after.

"I remember seeing the National Guard patrol the bridges and ports and felt a sense of security for the first time since the attacks," he said. "I wanted to be a part of that and figured it would also help me pay for college."

By September 2006, Flores was in Iraq serving as a medic for an infantry unit conducting combat missions across the country. Among his duties was providing healthcare for fellow soldiers and detainees.

A year later, Flores returned to his UCI studies, which were interrupted when he was deployed to Iraq. Financial assistance barely covered his books for the quarter and he found it difficult to balance classes with his financial obligations. Other veterans on campus were struggling with the same issues.

Flores and fellow student veterans founded the Veterans Student Union to support those making the transition from military service to campus life. The group serves UCI's student veteran community of about 200 and meets weekly at the Anteater Pub & Grille. The group advocates for federal tuition assistance and healthcare benefits on a national level and locally is urging administration to allow priority enrollment for veterans. Over the summer, chapter members joined Student Veterans of America in its successful effort to lobby members of congress to pass the new GI Bill.

Flores says the group will continue to work for change on campus and nationally. "Even though we are a small minority on campus, we want people to know that we do exist and we do have a voice," Flores said.