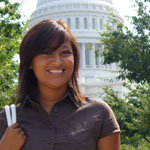 UC Irvine undergraduate Cristian Martinez has made the most of every opportunity that's come her way. In a few short years, she's gone from foster care to the halls of power in Washington, D.C.

Because of her in-depth study of the U.S.-Mexico border, she was tapped for a foreign policy internship in the U.S. Department of State's Bureau of Western Hemisphere Affairs.

Research has changed her life.

"The opportunities I've found at UCI have been the gateway for me," she says. "People here helped me believe I could carry myself with confidence."

"I had to work two jobs to support myself, and worry about getting healthcare and car insurance - things that don't affect most 17-year-olds," she says. "It was a stressful time, but since I started college, all of that's behind me."

At UCI, she found mentors like social sciences associate dean Caesar Sereseres, who encouraged her to get involved in research.

n May, she received the 2008 Chancellor's Award for Excellence in Undergraduate Research for her studies on U.S.-Mexico border security - a topic she examined from the perspective of someone who's lived in both countries.

She came to the U.S. from Guadalajara at age 6 and holds dual citizenship. Speaking Spanish fluently helped her communicate with Mexican public officials and understand their views on drug trafficking, arms smuggling, terrorism and immigration.

"I have a commitment to use my education to find interconnectedness between the U.S. and Mexico in the same way I feel interconnected," she says.

Sereseres admires the way Martinez "never says no to a new academic adventure." "Cristian is an explorer and risk taker," he says. "She takes up the challenge of each new opportunity - research, community service, internships and student leadership."

Those opportunities include serving as site supervisor for social sciences' outreach program, Global Connect, in which she leads a semester course on global affairs at Costa Mesa's Estancia High School. She's also co-chair of philanthropic events for the school's Dean's Ambassadors Council - engaging faculty and students in community service.

She spent the summer at UC Berkeley's School of Public Policy with the highly competitive Public Policy and International Affairs program, which prepares students for graduate school.

In December, she travels to Brazil to spend six months studying its foreign policy. She hopes to receive a Fulbright scholarship so she can research democratic development in Guatemala, and eventually obtain a master's in public policy. Her career goal is to become a foreign service officer.

For now, Martinez works as a peer mentor for Orangewood Children's Foundation, teaching foster youth about the kind of opportunities that helped her.

"When I was 17, I didn't know all the services available to me. I didn't have that much guidance until I came to UCI," she says. "I want to make sure they get the help I didn't get."