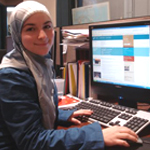 When former President Jimmy Carter spoke about the need for peace in the Middle East last year at UCI, his words sparked something in anthropology major Hadia Hakim.

An Irvine native, Hadia's parents and extended family were born and raised in Syria, and for as long as she can remember, she has spent her summers there.

"I've been blessed with the opportunity to frequently visit a part of the world that many people in the U.S. know little about," she says. "Hearing about the work Carter has done in the region made me want to learn more."

Last summer, she decided to put her anthropological training and interest in human rights issues to use and embarked on her own mission. The double honors student spent 3 weeks in a Syrian-based Palestinian refugee camp interviewing parents and children about life and growing up in the camp.

"As an Arab American, I've always been interested in policies aimed at helping refugees and immigrants because I feel like I can relate to the people the policies affect," she says. "I was really interested in learning how growing up in a confined, restricted space impacts identity." Her findings, which show how cultural connections to places and identity are kept alive over time, are part of her honors thesis she will submit before graduating in spring.

"It's really exceptional for an undergraduate to be so interested in very complicated questions about politics and identity," says Victoria Bernal, anthropology professor and advisor to Hadia. "She's really an incredibly determined and sophisticated student."

Hadia is continuing to pursue and apply her research in international human rights this fall as one of only a handful of students in the nation selected for the competitive Carter Center internship program in Atlanta, Georgia. Working specifically with the human rights program, Hadia reviews requests from individuals and groups seeking intervention on the center's behalf.

"When I first started, I read a story about a 10 year old girl in Yemen who was forced into marriage at age eight and is now trying to get a divorce," she says. As a result, Hadia, along with others in the program, is now working on a proposal from the Carter Center to the president of Yemen in support of reinstating a minimum age law for marriage. Another project she is working on is helping to organize the Human Rights Defenders Conference which brings together individuals and organizations around the world to discuss human rights issues pertinent to the U.S.

"The work we're doing is really hands-on and has the potential to impact human rights and international laws on a global scale," she says.

Her involvement on campus with the Model United Nations travel team and Mock Trial have further channeled her energy and interests in this realm. Upon graduating, she plans to combine all her experiences together with a law degree in hopes of making a global impact as an international human rights and refugee attorney.

"My anthropology degree has really helped me learn how to engage with people on the ground through observation and interaction, and my experiences with the Carter Center and spending time abroad have helped me gain an international humanitarian perspective," she says. "Working as an attorney will tie it all together by allowing me to apply law on the ground around the world."
Sheila O'Rourke, an anthropology lecturer and mentor to Hadia, has no doubt that she will succeed in her goal. "Hadia is a scholar of commitment and integrity - the kind of person who will make a difference in this world at a time when our global community is facing profound challenges."