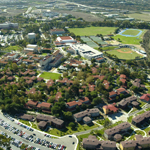 The role of demographers may not be widely known to those outside the field. In fact, it may come as a surprise for many to learn that information provided by these behind the scenes planners, statistical phenoms and research gurus affects each and every one of us on a day to day basis.

Take, for instance, the job of Deborah Diep. An '03 alumnus of UCI's Demographic and Social Analysis (DASA) program, Diep now works as director of California State University, Fullerton's (CSUF) Center for Demographic Analysis where she plays a lead role in developing the official population and housing projections used in community planning for all of Orange County. Where roads go, where sewer lines need to be laid, where fire and police stations need to be built to ensure best response times - these are all issues that she, as a demographer, helps solve before new communities in Orange County may be built.

"It's interesting to be at the ground level working with forecasts and projections to help people plan for and understand what to expect in their cities," says Diep whose credentials include undergraduate and graduate degrees in sociology from CSUF in addition to her UCI DASA master's.

She, along with a number of university professors and research and policy analysts at the San Diego Association of Governments, U.S. Census Bureau, IRS and numerous national research institutes and consulting firms, are among the first generation of graduates to complete UCI's pioneering master's program in demography.

Developed in 1998 as a joint program between the Schools of Social Sciences and Social Ecology, DASA uses a hands-on, teamwork oriented approach to train students on practical uses of statistics and population models that are essential in a number of fields. It is the School of Social Sciences' only stand alone master's program.

"Our goal in creating the program was to provide practical training for new and seasoned professionals for the analytic challenges faced in the government, non profit and business sectors," says founding director and sociology professor Judith Treas. The challenge, she adds, was creating a rigorous, relevant curriculum that would allow students and working professionals to complete the applied training in just nine months.

The program appears to have reached its mark, having graduated more than 100 students whose career paths read like a "Who's Who" list of professional success stories.

"The DASA degree provides extremely valuable tools for data analysis and research design, both of which are essential to our many graduates who go on to future careers in policy analysis and continued graduate studies," says David Smith, sociology professor and current DASA director.

The program builds upon the research strengths of faculty from more than a dozen different departments and pulls particular expertise from a rapidly growing interdisciplinary group who specialize in population studies. Among them are sociologists Frank Bean, Susan Brown, Andrew Noymer, Judy Treas and Wang Feng as well as others outside sociology and the School of Social Sciences including Kenneth Chew, senior lecturer in the School of Social Ecology, and education professors George Farkas and Greg Duncan, current president of the Population Association of America.

Their collective work is "putting UCI on the map" for demographic studies, says Wang Feng - a map that, based on the program's success, wouldn't be a stretch to say a DASA graduate may very well have had a hand in planning.

Join DASA as they celebrate 10 years of success by welcoming back their inaugural speaker, Peter Morrison, senior demographer, RAND Corporation on Oct. 15 at 6:00 p.m. in the UCI Alumni House.

Can't make it to the October 15 talk? Check out other population studies talks scheduled at UCI for the 2008-09 academic year.