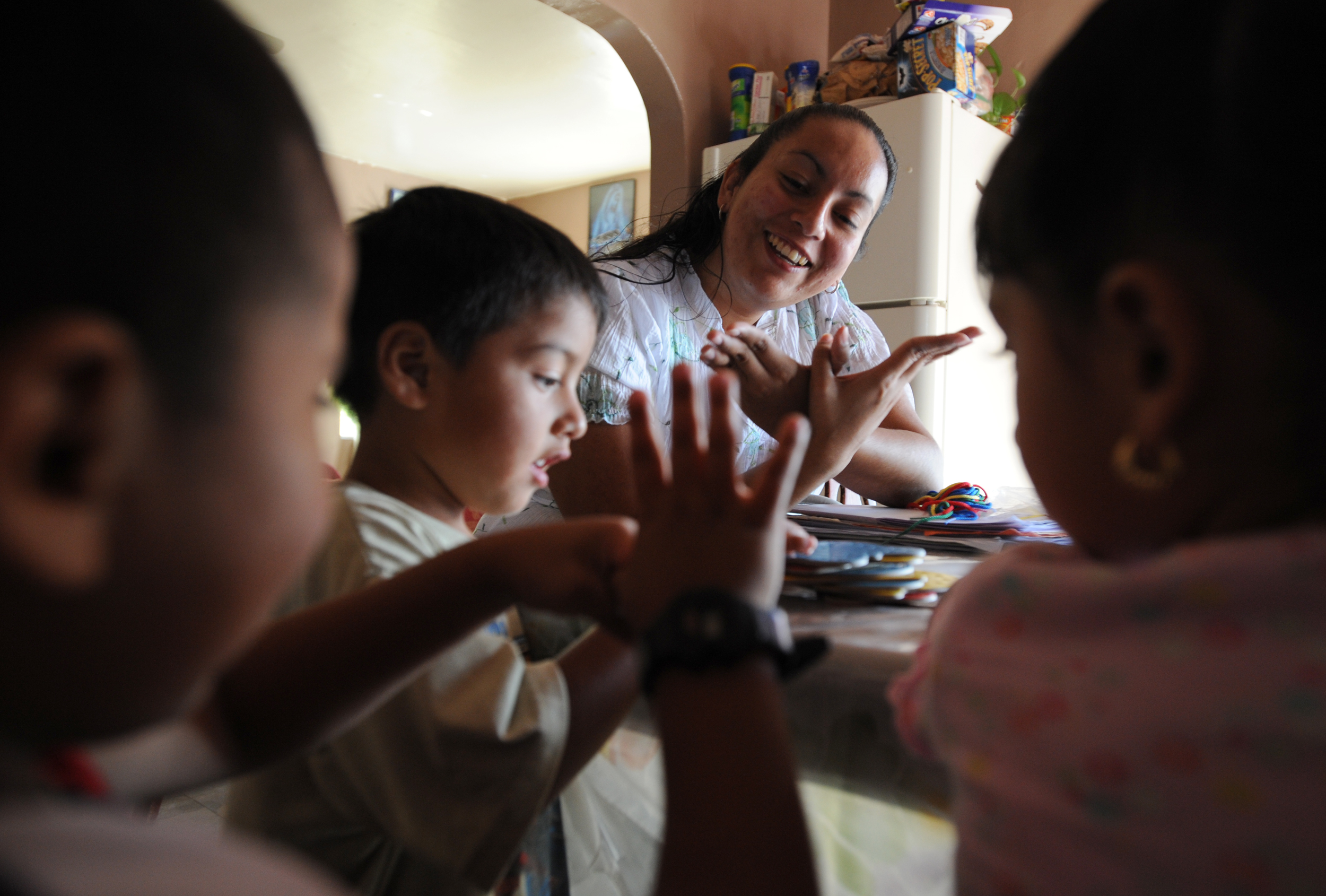 "What color is this?" asks recent UC Irvine graduate Noemi Maldonado, pointing to an orange block. "It's the same as a fruit you love to eat."

Lupe and Maldonado meet twice a week to read books and work on colors, shapes, vocabulary and memorization.

Lupe takes the Legos and meticulously stacks them, smiling as the blocks take the shape of one of his favorite animals.

"Look, it's a duck!" Lupe cries to his mom, Maria de los Angeles Gil, who helps Maldonado with the lesson.

"Before this, he didn't talk that much," she says. "Now he talks more, especially when people visit."

Building verbal skills is one of the main goals of the HABLA program - an acronym for Home-based Activities and Building Language Acquisition - founded and directed by cognitive sciences professor Virginia Mann. The program trains home visitors to help Orange County's Spanish-speaking parents prepare their toddlers for kindergarten. The program coaches parents to read and play with their children outside of the weekly home sessions, incorporating lessons into their daily lives.

The program, created in 2000 in Santa Ana, has grown to serve more than 1,000 families in areas including Anaheim, Garden Grove and Tustin.

According to Mann, children in professional families hear roughly 300 more words per hour than children in poor families. By age 5, this translates into a difference of more than 30 million words.

"We want to optimize the language environment to help children learn," Mann says. "Success in school depends on children learning a rich language before they enter."

HABLA - meaning speak' in Spanish - achieves this by encouraging parents to speak and read to their children in their native language of Spanish. The idea is that children who are proficient in their home language will be better equipped to pick up English in school. The program also teaches math and science fundamentals, such as categorizing and grouping by colors and shapes.

"We use books and toys as a way of encouraging high-quality conversations," Mann says. "We urge parents to help their children make connections between their surroundings and what they read in books. We give them Spanish-language versions of the same books that many children will encounter in English once they enter school."

Gil says she applies Mann's philosophy during visits to the local park with her son, pointing at trees, passing cars and even stop signs, describing their colors and shapes.

Maria Gallegos of Anaheim says she notices a difference in daughter Karol Andrea's behavior since she started HABLA five months ago.

"She's very observant now," Gallegos says of her 4-year-old. "Before, she would just ignore things around her. Now, she pays attention."

Karol's home visitor, Josefina Vallin Amirzadeh, says her goal is to challenge parents and youngsters to go beyond what they are supposed to know. "I never limit them," she says, "and they shouldn't limit themselves."

Researchers at the Brookings Institution, a nonprofit public policy organization based in Washington, D.C., will conduct a five-year evaluation of HABLA, assessing the program's influence on parent behavior, language development, and math and reading skills. Mann says the program can be adapted in other immigrant communities in California and beyond.