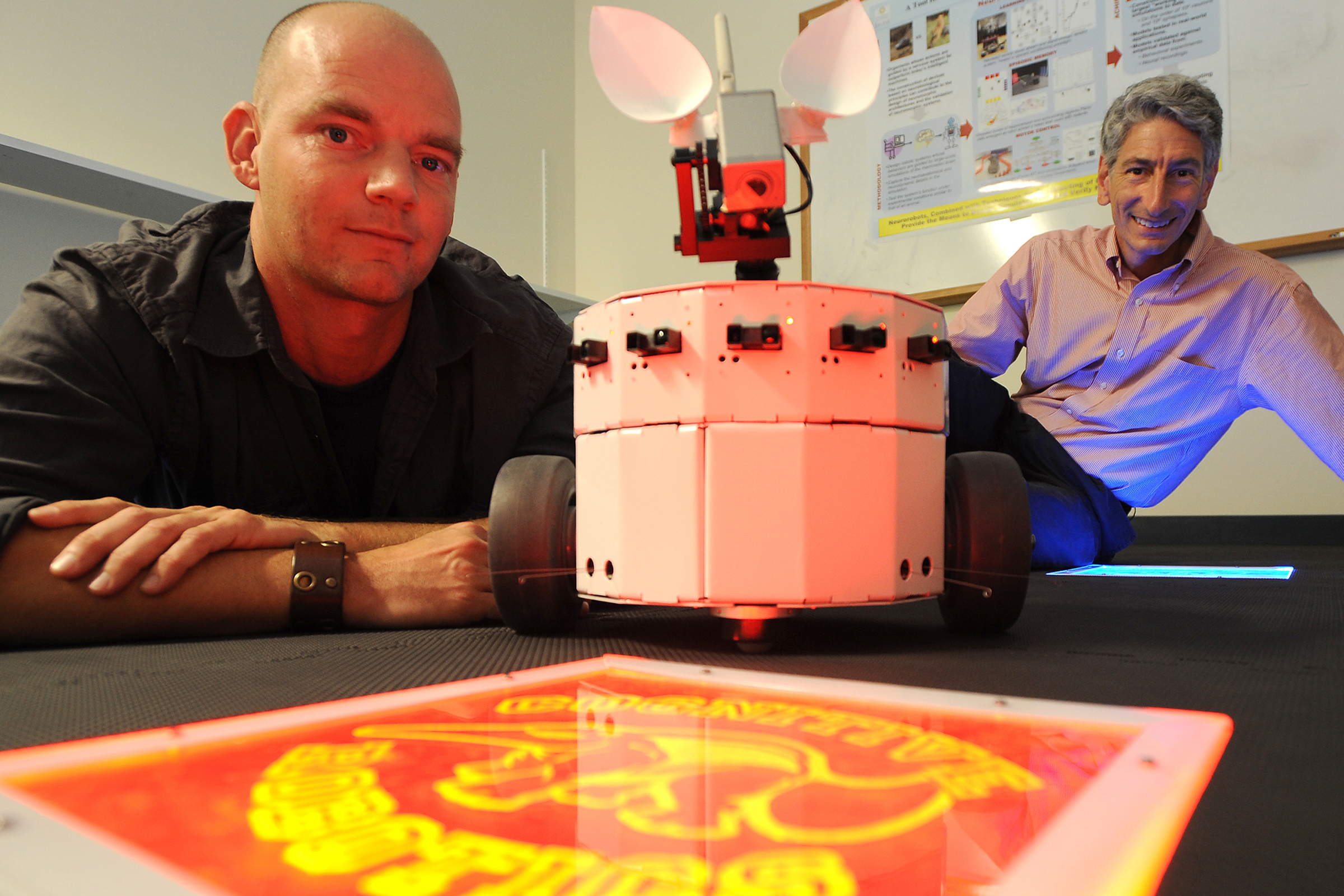 Meet CARL, short for Cognitive Anteater Robotics Laboratory. CARL is a robot, designed to think and act like a human being, thanks to the creative masterminds of Jeffrey Krichmar, UCI cognitive neuroscientist and Brian Cox, a former Hollywood animatronics engineer whose movie credits include, among others, Godzilla and Spielberg's AI.

CARL can move around on his own, nod his head, look at objects, and, when his curiosity gets the best of him, wander around a disco floor chasing moving lights. Soon, with funding from a newly awarded $300,000 National Science Foundation grant, he will give researchers an inside look at how our brains impact our behavior when we feel happy, scared, sad and surprised.

"We know very little about how the different chemical reactions within the brain affect behavior," says Krichmar who is leading the study. "The body has intelligence built into it which makes the brain's job of moving it easier. In order to observe a brain in action to see how it impacts our behavior, it needs to be part of a body that can see, move and interact with its environment."

And so, CARL was "born". His steel-encased body is full of cameras, microphones and feelers that allow Krichmar to simulate a living, thinking and, most importantly, learning being. His very human-like, software engineered brain consists of a computer network equivalent to more than 50,000 neurons and nearly two million connections between neurons, a smaller yet quite complex replica of the 30 billion neurons and 1 million billion synaptic connections present in human brains.

Using software generated cues, Krichmar is able to trigger CARL to "feel" a sense of happiness or reward when he sees a color, say green. CARL will then be presented with a different color, such as red, and sent a shock to simulate a bad feeling. The cues are representative of chemical releases in the subcortical region of human brains, similar to serotonin, dopamine, acetylcholine, and norepinephrine. These neuromodulators have been found to have an impact on behavior and may be responsible for feelings associated with risk, reward, effort and vigilance, says Krichmar.

His goal is to determine what reaction CARL will have to the different colors and whether or not he can learn what to expect when encountering the color in the future. Throughout the process, Krichmar will monitor the neural networks in CARL's brain to see how they interact with one another to produce his reactions.

Krichmar's findings will help researchers and scientists to better understand how neuromodulators in our brain interact to produce reactions while also providing insight on how to build more life-like robots.

Ultimately, Krichmar believes CARL will be capable of learning which colors to go to when triggered to "feel" a certain way.

"Neurorobots, robots whose behavior are controlled by computerized models of the brain, are powerful tools for studying brain functions," he says. "We can look at every part of CARL's brain while he's learning and figure out which parts are contributing to his behavior, something that, for many technical reasons, just cannot be done in humans and animals today."

The new concept of neurorobotics is also useful for building a new class of intelligent robots. "Following how brain functions lead to intelligent behavior may be a model for making better robots," Krichmar says. He adds that while it may be some time before we come close to creating robots similar in intelligence to those depicted in science fiction, "Technology is bringing us closer to the development of robots capable of helping with simple tasks that don't require programming for every step they take."

Watch CARL in action as he explores his way around Krichmar's robotics laboratory.