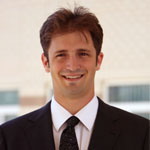 As the host country of the 2008 Olympic games, China underwent a massive traffic overhaul in order to ease congestion and improve air quality for the world's top athletes who competed this summer in Beijing. One program went so far as to restrict driving privileges for private car owners to every other day travel - a move Chinese officials say not only reduced pollution levels by 20 percent, but also eased congestion in the world's most populous country.

While the measure may seem extreme - and realistically is only a short term solution, says fifth year economics graduate student Mark Kutzbach - China's move is an example of developing countries' struggle to keep growing traffic levels at bay.

"As income levels in developing countries such as China rise, faster modes of transportation - such as personal vehicles - become more in demand which leads to major issues with congestion," says Kutzbach.

The recipient of the 2008-09 Sheen T. Kassouf Endowed Fellowship, he studies transportation and labor economics with a focus on the effect income growth and income inequality have on car and bus use in developing countries and innovative ways through which congestion problems may be solved.

Two models he has explored extensively include enforcing a tax on car use to reduce the number of drivers who can afford to be on the roads, and reserving entire lanes of traffic for buses, thereby encouraging public transportation as a viable alternative to private car use.

He has presented his research at the 2008 UC Transportation Center conference in Santa Barbara and in November, he will share his findings at the Urban Economics Association in New York.

Since arriving at UC Irvine in 2004 after working for several years as a sales force management consultant, Kutzbach has worked closely with Jan Bruekner, David Neumark and Kenneth Small, economists who are widely known for their expertise in transportation and labor economics.

"Mark has built a theoretical model of 'motorization' in developing countries, under which car usage surges with income growth, as in China," says Brueckner. "His theory shows that, as rising incomes cause a massive switch to cars, bus usage can collapse, and the explosion in the number of vehicles on the road can lead to urban gridlock. The paper will have a big impact on how transport economists think about motorization."

Kutzbach is the third recipient of the annual $10,000 Sheen T. Kassouf Endowed Fellowship. Established in 2006 to honor the legacy of Professor Sheen Kassouf, a pioneer of modern finance and a highly respected UC Irvine economics scholar and academician, the award recognizes economics graduate students who demonstrate excellence in coursework and research.