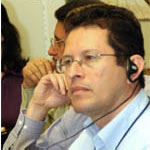 On Tuesday, July 22, seven delegates from El Salvador's multipartisan congress met with professors from UC Irvine and police officers from Santa Ana's gang suppression unit in an effort to explore potential solutions to the country's growth in gang and drug related violence.

While it is the smallest country in Central America, El Salvador has one of the highest per capita murder rates in the world with latest census data reporting the number at 64 per every 100,000 compared with the United States' rate of six per every 100,000.

"It has been nearly 15 years since the wars of Central America came to an end, and peace and democratic elections have not brought prosperity and citizen security," says Caesar Sereseres, Social Sciences associate dean and political science associate professor. Also a former member of the U.S. State Department and research consultant with the RAND Corporation, Sereseres is an expert on foreign policy and national security matters in Central and Latin America. He spoke at length with the delegates on the need for a cohesive, large-scale regional security plan in the area.
"Central America is being increasingly impacted by conditions in Colombia and Mexico," he said, warning that without a coordinated plan for security, regional conditions would only worsen as a result of recently passed U.S. legislation to crackdown on international drug trafficking (see a detailed summary of Sereseres' talk below).

After dialoguing with UCI's regional security experts and gang prevention strategists, the congressmen toured the Santa Ana Police Department which has received wide-spread recognition for its unique - and successful - "direct supervision" model for processing inmates.

The group left Irvine for a stop back in D.C. before heading home to El Salvador "very impressed" with the expertise of Irvine's researchers and police force, according to Congressman Rolando Alvarenga Argueta who represents the San Salvador district and sits on the country's committee responsible for public security and combating drugs.

"The visit to UCI to speak with experts from Social Sciences and Social Ecology provided the congressional delegation with insights into research methodologies, the incorporation of technology into the assessment of youth violence, and public policy options for government leaders," says Sereseres. "The congressmen left with a greater appreciation of the contributions of social scientists to the national challenges of El Salvador."

The delegation's 10 day fact-finding visit - the last four of which were spent in Southern California, the first six in Washington, D.C. - was one of two yearly exchanges hosted by the International Republican Institute (IRI) through funding from the Institute for Representative Government via the U.S. State Department's Bureau of Educational and Cultural Affairs. IRI is a non-profit, non-partisan organization that advances freedom worldwide by developing political parties, civic institutions, open elections, good governance and rule of law.

Caesar Sereseres
In his talk with the delegates, Sereseres outlined how the U.S.'s newly approved Merida Initiative will impact El Salvador and the surrounding Central American countries.

"Through Merida Initiative funding, the U.S. will be beefing up its efforts to combat international drug trafficking," he explained. "The effects of the U.S. crack down will be felt throughout Central and Latin America as drug lords change territories, shipping methods and trafficking patterns to find new ways of transporting into the U.S."

In order to stave off what could potentially become a civil war in Central and Latin America as the scenario plays itself out, Sereseres warned the congressmen that more law enforcement personnel would be needed on the ground. He also spoke of the importance of regional planning to attack the problem on a large, coordinated scale rather than each country continuing to focus inward.

Ricardo Chavira
Addressing the issue of the country's global public image was Ricardo Chavira, a Pulitzer Prize winning international journalist and Social Sciences lecturer. Having spent a majority of his 30+ years in journalism reporting on Central American issues and making at least as many visits to the small country, he provided a unique view of the country's perceived image around the world.

"People in the U.S. see El Salvador as a 'black eye' for its poverty, gang and crime problems. What they don't see, and it's because the story doesn't get told, is the success with which El Salvador has pulled itself from the brink of political calamity," he said, speaking to the country's rise from an authoritarian government to its current democratically controlled congress. "El Salvador is moving forward, despite the violence and economic disparities that exist.

He urged the officials to see that a better job is done in telling their success stories in order to more positively shape public opinion around the world.

Al Valdez
Speaking on the topic of gangs and technology was Al Valdez, a 30 year law enforcement veteran and Social Sciences lecturer who specializes in gang and narcotics prevention strategies. According to Valdez, technology and the media have helped globalize American gang culture, transporting similar gang related problems faced in the U.S. around the world.

"With cell phone technology and the internet, gang members from around the world communicate easily and often," he said. To illustrate his point, he pulled up websites for the "Bloods" and the "18th Street Gang," two Los Angeles area gangs who have used the internet to go international.

He stressed the importance of infrastructure-based prevention strategies as a tool to combat the growing problem. "Direct the foreign aid you receive from the U.S. and other countries toward employing local people to build roads, sewers and provide other services," he said. "This type of strategy gives employment to those who need it and gives a better quality of life to the people in the community," he said, adding those actions alone would go a long way in helping reduce local gang activity.

Jim Meeker
Next up was Jim Meeker, Social Ecology associate dean and criminology, law and society professor. From 1995-2001, Meeker ran the Orange County Gang Incident Tracking System (GITS) which utilized geographic tracking software to plot criminal gang activity throughout Orange County. Using the data obtained from more than 22 cities, the group was able to track where the most gang-related crimes were happening and deploy resources accordingly.

He stressed to the El Salvadoran delegates both the importance of having such a system in place and the necessity of inter-agency cooperation in making it a success. "It's also very important to track crime rates before and after implementing such a program in order to see what the picture looks like beforehand and how it changes as a result of your efforts," he added. If utilized to its full potential, he explained that a similar tracking system could be an excellent tool for a police force that is short in both financial resources and law enforcement officers.

Leah Ersoylu
Rounding out the afternoon's UCI meeting was Leah Ersoylu, a 2005 UCI political science Ph.D. graduate who now works as an independent consultant specializing in advocacy and civic engagement planning. She went through a series of strategies that have proven successful in other communities at preventing or intervening in youth related gang activity.

"After school programs, community centers and sports programs are all very important in the prevention and intervention strategies that have proven to be successful," she said. She urged the delegates to examine any such programs currently in place within their communities and consider what it would take to either supplement them financially or to establish new programs in areas where none currently exist.