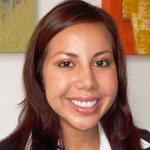 Throughout her five years of international and economics undergraduate study at UC Irvine, Denise Sandoval welcomed every opportunity for educational travel that came her way, spending semesters studying in Mexico, Spain, Brazil and Washington, D.C.

Now an alumnus of the university, her passion for the road has yet to waver.

Sandoval is one of only 10 students in the United States to receive a Fulbright binational business program grant, which, in August, will take her to the heart of Mexico's economic and cultural district.

"I have an immense passion for traveling, I see it as an excellent method to experience first-hand other cultures and truly understand international dynamics critical to major political, economic and social issues," says the Anaheim native.

The daughter of Mexican immigrants, Sandoval says she has always felt very comfortable as "both a Mexican and an American," which prompted her to pursue a career with the potential to impact both countries.

"I see a country's economic and business development efforts as a way to solve social issues like poverty, crime and violence," she says. She pursued research in this realm in Oaxaca, Mexico where she studied how money sent from Mexican immigrants living and working in the U.S. back home to relatives affected their local economies.

"It was really interesting to see just how much American money and culture impacted the small rural Mexican communities," she said. While new business didn't develop as quickly as she expected, she found that existing business thrived on offering luxury items such as cereal, yogurt, satellite TV and other items that were previously unknown or unaffordable within the area.

The experience left her wanting to learn more. She came back to the U.S. only for a short time before heading to Spain where she spent six months honing her Spanish language skills. A similarly spent semester in Brazil left her fluent in Portuguese while also giving her the opportunity to work with the country's Chamber of Commerce.

Between her out of country travels, she found time to intern with the U.S. Department of Commerce in Washington, D.C. through the University of California's UCDC program. Although it was exciting to meet Mexico's president, Felipe Calderon, she notes that her biggest highlight while in our nation's capitol was having a front row seat to discussions and policies that are currently impacting business and economic development in Mexico.

"I was really fortunate to be in DC during a time of transition for Mexico as Calderon took office," she says.

With only a month to go until she heads back down south, Sandoval is cooling her heels as a resident advisor for UCI's California State Summer School of Mathematics and Science (COSMOS) where she mentors and advises high school students getting ready to start their college careers.

Her advice to incoming students: "Discover your true academic and professional aspirations, take advantage of all resources and opportunities available beyond the classroom, engage in new experiences outside your comfort zone and gain a plethora of skills to develop into the individual you want to become."