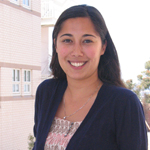 Golnaz "Goldie" Komaie, a seventh year sociology graduate student, has received a $20,000 Doctoral Dissertation Fellowship from the Haynes Foundation in support of her research on second generation Iranian immigrants living in California.

A second generation Iranian herself, Komaie studies how other sons and daughters of immigrants have incorporated into communities in Los Angeles and Orange County.

Using interviews and census data, Komaie studies the group's attitudes and feelings on a variety of topics including politics and the role religion plays in their daily lives. She is also interested in learning how they have integrated into southern California communities while still maintaining their ethnic identities.

"There have been a number of studies on how my parents' generation, the first generation of immigrants to the U.S., has adapted and incorporated into American society," she says. "There isn't as much on the second generation."

Among her preliminary findings, Komaie notes there is a small, but noticeable difference between Iranians in LA and OC, primarily in terms of the neighborhoods in which they choose to live.

"Immigrants in Los Angeles are more apt to live in small Iranian communities whereas those in Orange County tend to live in more diverse neighborhoods," she says. Her continued research will explore these variances and examine how similar factors may promote - or inhibit - their ability and desire to incorporate.

Funding for the project will begin July 2008 and cover a one year period. Komaie's research is supported by Los Angeles' oldest private foundation, the John Randolph Haynes and Dora Haynes Foundation which has encouraged social science research that directly impacts the Los Angeles area since 1926.