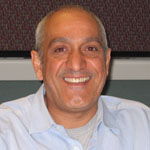 A degree in anthropology can lead students along countless career paths. For some, the pathway may lead to studying native customs and cultures in the far corners of the world. For others, the pathway may be filled with stepping stones to careers in academia, government, or non-profits. For Reza Zarif, class of '91, the anthropology pathway took him on a rather alternative journey on his quest to achieve the "American dream."

Orphaned by the death of both parents at the age of just six, the Iranian native made his way to the United States, a teenager in search of the "endless opportunities America had to offer." After dabbling in a few college courses here and there while working for a Japanese electronics firm, Zarif decided to pursue a degree in anthropology at UC Irvine.

"I loved traveling and learning about different languages, cultures, and people," he says.
"Anthropology was a perfect fit." He enjoyed the topic so much that he decided to pursue his Ph.D. in anthropology.

Ever the entrepreneur, Zarif was also busily running a small electronics company he started out of the kitchen in his San Clemente home. A year and a half into his graduate program, the opportunity to take his company to a new level presented itself. Under the advisement of his mentor, Zarif decided to alter his path and, as his mentor put it, "follow his dreams."

Now 75 employees strong, his small startup known as Probe Manufacturing caters to a number of Fortune 500 clients and is quickly becoming a key player in alternative energy innovation.

His successes are nothing short of amazing for the self-made business man who started from nothing but a positive attitude and even better outlook on life. "I wake up every morning and get to live my dreams," says Zarif. His anthropology degree, he notes, has definitely proven to be an invaluable asset as he works with business clients all over the world.

"Being able to communicate effectively with people from many different cultures is a key to running a successful global business," he says. His passion for developing new alternative energy technologies, is also important to the global stage.

"I believe energy to be the defining issue of our time," he says. "Reliance on non-renewable fuels is not only an American problem - it's a global problem." He travels the world meeting with key foreign leaders while seeking out new innovative methods through which to solve the crisis. In addition to "saving the planet", Zarif leads professional seminars on business leadership and quality management.

He also believes very strongly in supporting student groups and activities. In that spirit, he gives of both his time and financial resources to a number of organizations including San
Clemente United Soccer, a non-profit soccer club he founded years ago, as well as local high school booster clubs, and, of course, his alma mater, UC Irvine anthropology.