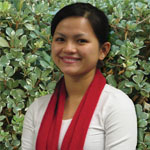 Born in Binh Dinh province, Vo's family immigrated from Vietnam to the U.S. in search of better educational opportunities when she was six years old. Aside from a brief visit two years later, she had not been back.

Last summer, more than 15 years later, the fourth year undergrad and Student Achievement Guided by Experience (SAGE) scholar returned to the small rural province she once called home looking for answers for both her research and her cultural heritage.

Vo took advantage of the unique opportunity to interview and interact with the people in her home village in an effort to better understand Vietnamese attitudes toward mental health
and counseling services - topics she says are off limits in traditional Asian culture.

"The Asian culture is a very collective community," says Vo. "It's a commonly held belief that everything a person does is a reflection upon the family."

She speaks from experience, having grown up in a traditional Asian household. "When I decided to break the mold and pursue a degree in psychology, I had some explaining to do," says Vo whose parents expected she would take the "traditional" route into medicine as had her older brother. The idea of Asians, specifically Vietnamese, seeking out counseling services, she says, is equally taboo even when those services may well be warranted.

"The people in Vietnam have experienced events that, in addition to common ailments, could very easily - and understandably - weigh on their mental health," she says, pointing to stresses brought on from the decade long war fought there in the 60s and 70s.

Through her research, she is determined to learn more about Asian culture and perceptions in order to develop better strategies and methods to provide counseling services to those who, out of tradition, may not seek help when needed.

"The experience was invaluable," says Vo, explaining that she came home with much more than she had hoped. "In addition to learning about perceptions of counseling in Vietnam, I experienced and observed many of the traditions I had only heard about, but never experienced first hand."

Vo's study is one of many she has completed while at UC Irvine, all of which have received funding from the university's Undergraduate Research Opportunity Program. A previous study she completed on the Asian values gap between parents and children and how types of family affection influence parent-child relationships was selected by the American Psychological Association to be presented at one of their annual meetings. It is currently being converted into manuscript form for publication consideration.

Vo hopes to return to Vietnam in fall 2008 to continue her research on Asian culture. She then plans to transition into a graduate program in counseling psychology the following year.