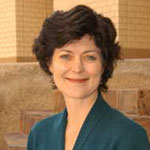 To write a book on the role of religious ethics in international relations, she spent a year studying at The University of Chicago Divinity School. To deepen her understanding of Islamic texts, she took classes in Arabic at UCLA. To research religion and social movements, she traveled to Kenya, Cameroon and the Middle East to interview members of humanitarian organizations.

"What better way is there to look at the roots of activism than to talk to the people who believe they're trying to make the world a better place?" Lynch asks. "I want to assess their experiences against our concepts and theories about how the world works."

Many of her UCI colleagues and students believe Lynch herself is trying to make the world a better place.

"Her work on religion and ethics in international affairs has depended on an ability to be empathetic regarding the beliefs and values of numerous people and groups," writes Susan Bibler Coutin, associate professor of criminology, law & society, in her Living Our Values nomination letter.

Lynch's diplomatic skills serve her well as director of the School of Social Sciences' Center for Global Peace and Conflict Studies, a multi-disciplinary program that promotes understanding of difficult world issues.

"Issues of peace and conflict, like arms control, national security or the rise of humanitarianism, intersect all areas of the university,"Lynch says. "We have faculty members from eight schools. We bring them together with graduate students, so we can look at the issues in ways that are broad-based."

In the classroom, she engages students by inviting them to relate their own multi-ethnic and multi-religious backgrounds to the subject matter; she makes learning fun, often punctuating her lectures with excerpts from popular songs, film, and - her favorite - Monty Python.

An inspiration to students, she's received mentoring awards from the Women's Caucus for Political Science of the American Political Science Association and the Society for Women in International Political Economy. She's also served as equity adviser for social sciences. Writes Coutin:

"She's been able to promote debate, enhance the research opportunities of UCI students and faculty, support initiatives developed by other campus institutions, contribute to the intellectual life of the campus by organizing lecture series and other events, (and) bring major world figures to UCI to discuss terrorism, religion, human rights, security and other topics."

Lynch lives UCI's values both professionally and personally, writes Coutin, supporting the poor and homeless in her community, reducing her household's consumption to help the environment and sometimes attending city council meetings to make her voice heard.

"I've always been an activist as well as a scholar," Lynch says. "What drives my work is a commitment to merge critical philosophical questions with engagement in the world."