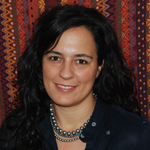 Growing up in Costa Rica, a Central American country with more than 50% of its borders comprised of coastline, the contested notion of water access as a basic human right is a no-brainer for Andrea Ballestero. Now a second year anthropology graduate student, the topic is a driving force behind her research.

With recently awarded fellowships from the Center for Unconventional Security Affairs at UC Irvine and the Wenner-Gren Foundation for Anthropological Research, Ballestero will soon be travelling to Costa Rica to study one community's innovative system of water pricing based on the purchasing power of the people.

"In Costa Rica, you have people and whole communities with greatly varied economic means," says Ballestero, explaining that those people and communities on the lower end of the spectrum often lack the funds to pay for such necessities as access to clean drinking water, the absence of which leads to a host of issues experienced not only in Costa Rica, but around the world.

One small coastal Costa Rican community appears to have come up with a solution to this international problem, and it is here where Ballestero will focus the first part of her study.

"Working together with a national regulatory agency, the community of Cocles was able to take advantage of a newly restructured national tariff and subsidy system by which water is priced and charged," she explains. "Under the new system, the community was able to reclassify a certain percentage of their population who fell under the poverty line so that they would be eligible for the national subsidy to help cover their water bill."

Beginning January 2008, she will travel to Cocles and conduct interviews and surveys within the small community to determine whether or not the program has been and may continue to be successful in improving water access to poorer populations. She will then travel to Northeastern Brazil where she will conduct a similar study.

Findings from both case studies may then be applied to the development of similar models for other communities across the world facing the same crisis.

"I believe water, as many other things in our life, goes beyond imagined borders that we create. The challenge I have set for myself is to go beyond those borders and put together people and ideas that might have been considered irreconcilable," Ballestero says. For her efforts, Ballestero was a co-recipient of the School of Social Sciences' 2007 Outstanding Graduate Student Award for Service.

"This kind of imagination might help find solutions to the fact that 4 out every 10 people in the world lack access to the water that we take for granted in our daily lives in the cities."