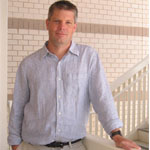 We've all been there...after returning from a relaxing, much deserved vacation, you reluctantly head back to your office and power up your computer. There is a sinking feeling as you open your email, knowing what lies ahead. Within no time, your inbox appears to have spontaneously combusted into hundreds of emails. While fathoming how you will begin the arduous process of wading through this massive mess - a majority of which is presumably "junk" - you think to yourself (after avoiding the impulse to click "delete all"), wouldn't it be great if your computer could think for you and determine the most important information in your files?

Enter Michael Lee, a cognitive science professor who arrived on campus from Australia in March 2006. Using mathematical and computational models, Lee develops decision making models based on user behavior. When applied, these various models are able to perform a number of tasks including, as in the example above, the ability to sift through your inbox to prioritize that 10% of high importance information hiding among your pile of messages, based on your past emailing habits. "By monitoring what you've done in the past, these models are able to determine how you would make a decision on which emails you're most likely to answer," says Lee.

Likewise, similar models may be applied to a number of different decision making scenarios in which information prioritization is involved. Working primarily with the Australian Department of Defense as well as corporations in the oil and gas industry, Lee's decision making models provide insight as to how optimal decisions within different environments may be reached when too much - or too little - information is available.

"People are very good at making decisions by making leaps and guesses based on sparse information," Lee says. By building computer models with similarly flexible and robust decision making abilities, good decisions can be made more quickly and effortlessly, says Lee - the success of which may be measured in possible lives saved through the avoidance of a national security crisis, or in the billions of dollars in earnings for the oil and gas industry. Or, as in the case of your inbox, success may be measured in time saved, a result that many of us who work 40+ hour work weeks will agree, is priceless.