No Grit, No Glory

no grit, no glory

After a tough rejection sent him reeling, Joshua Swank, political science senior, has learned the value of grit and determination 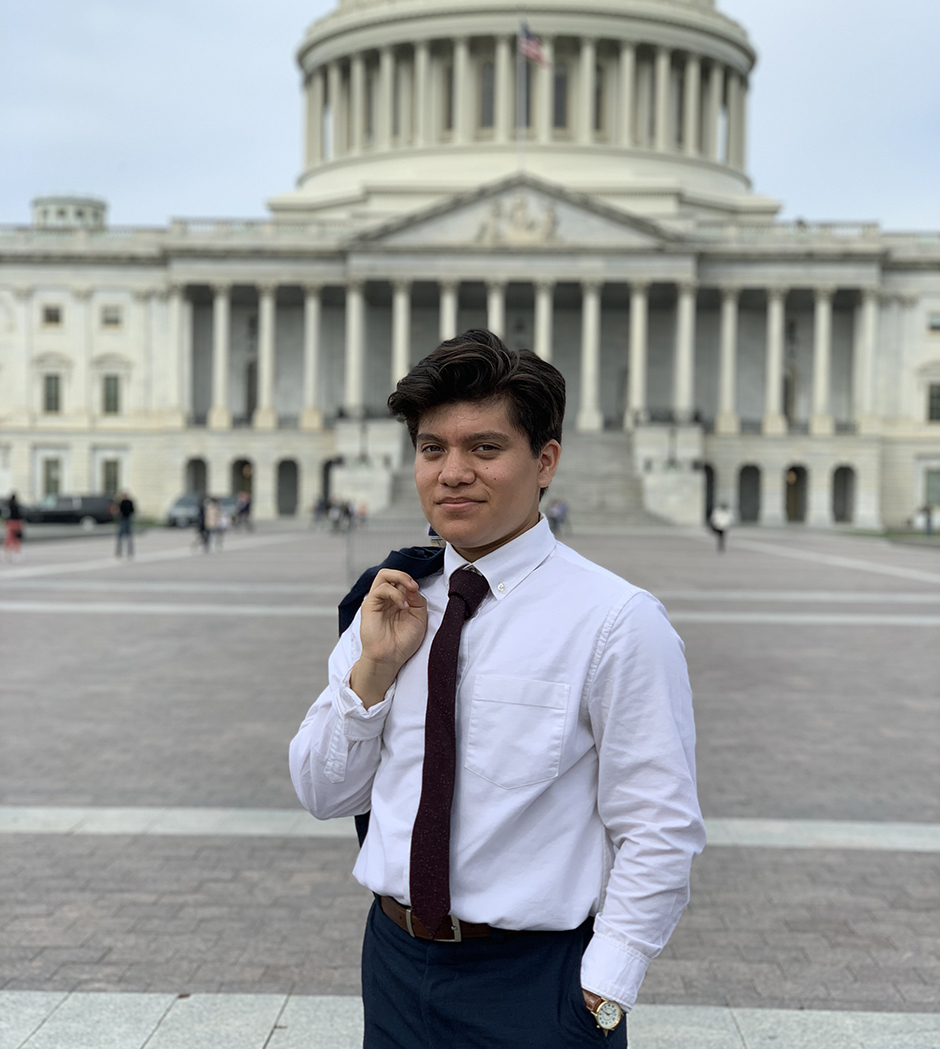 It can be said that rejection is actually just an opportunity for redirection - a chance to take a path you hadn't considered, but that may offer something greater. But not so for Joshua Swank. The political science undergrad’s first experience with true rejection ended up being an occasion to dig his heels into the path he wanted and challenge himself to make it happen. Four years later, he’s set to graduate from UCI as the Lauds & Laurels Outstanding Undergraduate with the degree he’s dreamed of and opportunities in academia, politics, and research at his fingertips - all due to his refusal to give up on his goals.

As a life-long high achiever with a clear vision of a future in politics, Swank’s self-image was tied to his accomplishments in this area. He remembers campaigning for people to vote as a 4th and 5th grader, showing a knack for impassioned debates in junior high, and running for class president of his high school with an off the cuff speech he delivered after losing his notes minutes before. He was involved in extracurriculars and filled his high school career with AP courses on his path to attend a UC school. So when not one, but all of his UC college applications came back as rejections, both his future and his self-perception were thrown for a loop.

“You hear people say things like, ‘when one door closes, another one opens.’ But it was very disheartening, to be honest,” he says. “When those rejections came in, there was a period of time where I really didn’t know what I was going to do after I graduated high school. It’s not an enjoyable place to be.”

He used this time to do some soul searching and plan where to go and what to shift his focus to next. Then, as he was reading his way through the book Love Does by Bob Goff, he came across a line of text that changed his approach to the entire situation.

One of Goff’s stories recounted the tale of an upstart student following his rejection from law school. But in response to a door being shut in his face, this young scholar didn’t search for another door. Instead, he sat outside the admissions desk in silent protest until the admissions director let him in.

“Sometimes, God wants us to kick some doors down,” Swank remembers reading. “That really hit a chord for me. I thought, maybe I just needed to prove how much I wanted this. And really, I needed to remember who I was. I needed to trust what I knew I was capable of.”

Swank decided he would keep trying for his UC dream, and chose to write a letter of appeal to UCI (though he had considered sitting outside the admissions office until they agreed to let him in). Then, he just had to wait.

The weeks between sending his appeal letter and receiving UCI’s decision went by in a blur. He was trying to finish his high school courses, spend time with family and friends, and prepare for graduation without knowing where he would be in a few short months. Then, two days before his graduation ceremony, he got the good news.

“It felt a bit like that scene in Toy Story 3, where the toys are moments away from being incinerated and then out of nowhere a claw comes and picks them up and saves them,” he remembers. “It was this huge relief and then excitement that it worked out. The fact that my time at UCI almost didn’t happen made me all the more motivated to make the most of my time here. I was just ready to hit the ground running as soon as I got on campus.”

Over his nearly four years at UCI, Swank has utilized every opportunity to keep himself on the path toward diplomacy and politics. He’s studied abroad in the Middle East, served as a counselor on the Youth Advisory Board for Congresswoman Katie Porter, written a 30-page academic paper on American national identity as a student researcher for UROP, represented more than 6,000 UCI undergrads as an ASUCI social sciences senator, interned for Orange County 5th District Supervisor Lisa Bartlett and, most recently, worked as a legislative intern for U.S. Senator Dianne Feinstein through the UCDC program.

The fact that my time at UCI almost didn’t happen made me all the more motivated to make the most of my time here.

His passion for politics and policy comes from his father, a U.S. Army Ranger turned Department of Homeland Security Public Affairs Officer, who took Joshua and his sister to many naturalization ceremonies when they were growing up. But the younger Swank never felt pressure to follow a similar path. He simply found meaning in the opportunity to serve others in his country.

“My parents have always been supportive no matter what I wanted to do,” he says. “But I feel a need to push myself and serve my country, in whatever form that takes. I have found that civic engagement makes the most of my potential to lead and advocate for the democratic values we all hold dear.”

His time in the UCDC program has allowed him to experience a new side of politics at a national level, gaining exposure to the transportation, energy, and foreign policy sectors while drafting memorandums and researching federal policy in the U.S. Capitol Building.

He hopes to work for the State Department one day, but before he does he has some exciting opportunities at his fingertips.

He will be attending Oxford University this summer as part of the Education Abroad Program, and he has been accepted into UCI’s Philosophy, Political Science, and Economics program that allows students to complete a portion of their master’s degree during their undergrad and finish it with one additional year. But before he decides if or when that will happen, he is waiting to hear back about a Fulbright Scholarship which would take him to Amsterdam for a year.

“I’m a semi-finalist as of now, but I should find out soon,” he says. “I’m particularly drawn to the Fulbright program because of its emphasis on immersion in the culture you’re visiting. As a Fulbright Scholar, you are essentially a student diplomat while you conduct your research, and since I’m interested in ultimately going into foreign policy in some form it really appeals to me.”

His research proposal for his Fulbright application, focused on Russian disinformation campaigns and “hacktivism” in social media, is particularly timely in today’s climate, and he hopes that he will have the opportunity to explore the topic further. But it's safe to bet that, even if circumstances try to take him another way, Swank will find a way to make it happen.

“Another quote I love is from Fahrenheit 451, and it talks about the importance of tenacity,” he says. “It says, ‘Don't ask for guarantees. And don't look to be saved in any one thing, person, machine, or library. Do your own bit of saving, and if you drown, at least die knowing you were heading for shore.’”