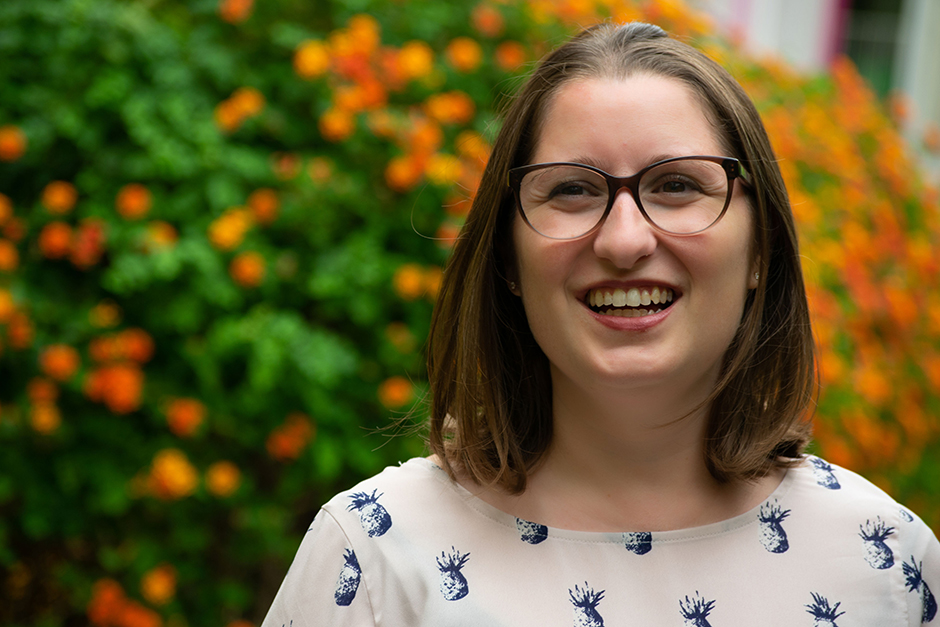 “I found demography fascinating, and then came to learn there’s a whole master’s program about this stuff, and it’s at UCI,” says alumna Diana Lavery.

Diana Lavery ’06, M.A. ’08, has leveraged the skills from her master’s degree in demographic and social analysis (DASA) to chart a career helping policymakers understand the world around them with data maps and visualization tools. Her own career map spans California to Washington, D.C., and includes working on the U.S. Census and helping state higher education systems with their planning. All of it, she says, she owes to her experiences at UCI.

Setting out
Lavery visited the UCI campus from her hometown of Encinitas, California, for tournaments with her high school Quizbowl team, an academic trivia competition. She liked the campus right away, and enrolled as a math major, but soon switched to economics, where she could apply her math skills. Like many of her classmates, Lavery interned at an investment banking firm, but the finance industry didn’t feel like home.

Then, she took a population studies course about demography.

“I found demography fascinating, and then came to learn there’s a whole master’s program about this stuff, and it’s at UCI,” Lavery says.

After graduating in winter 2006, Lavery applied to the DASA program. Just a handful of master’s programs in demography exist (most are doctoral programs) and, of those, only UCI’s can be completed in one year.

“It makes for a busy year with all the courses and the independent project, but students come out much stronger in a very short time,” says David Schaefer, professor of sociology and director of UCI’s DASA master’s program.

One of the program’s signatures is that each of the students in the small cohort are paired with a faculty advisor and work closely with them on their project.

Lavery’s advisor was sociology professor Wang Feng, a widely recognized expert on demographics and birthrates in China. Lavery worked with him to use large data sets from the Centers for Disease Control and other sources to examine the relationship between a mother’s education and infant mortality in the U.S.

“A doctor who is delivering babies is looking at 300 births a year, whereas a demographer is looking at millions. They can see things differently,” says Lavery. “The U.S. has stark differences in infant mortality depending on the mother's education level, even within racial groups.”

Power of internships
Housed in the Department of Sociology, the DASA program is highly interdisciplinary, and students are encouraged to take classes in different fields. Lavery enrolled in courses in education and public health – both fields where many program alumni have successfully pursued careers. Other recent graduates have gone into the private sector or pursued Ph.D. programs.

“There’s room for an elective each quarter which allows students to tailor their coursework to their particular professional goals,” says Schaefer.

For Lavery, it was an elective on geographic information systems (GIS) that not only helped her get her first job, but also set her on the career path she continues today. Lavery had been working in a paid internship at the County of Riverside as a GIS analyst in land records and mapping. The exact skills she learned in class that quarter turned out to be what the county needed, updating government records with new addresses as the region grew and developed.

After graduating, Lavery moved to Washington, D.C., for an internship with the Population Reference Bureau, a nonpartisan research organization that supports the U.S. Census Bureau’s data dissemination efforts.

I would not have had any of my full-time jobs without the DASA program.

There, she worked alongside other graduate students in demography – most of them pursuing Ph.D.s – to conduct research and inform policy.

Lavery says the powerful impact of those two internships would be felt for years. Both of her first two jobs after graduating were at the same organizations where she previously interned. First, she worked at the County of Riverside, leveraging her experience working on the U.S. Census to help local officials prepare for the massive undertaking of counting every living soul in their geographic area. Then, she returned to the Beltway for a full-time job at PRB.

Anteater connections
The network of friends, mentors, and mentees that Lavery established at UCI has been lasting. She met her future husband, Pierre Auza, when they were both undergraduates. Then, in the DASA master’s program, Lavery built strong relationships with her classmates, including one who would ultimately be her roommate and bridesmaid at her wedding.

Even from the other side of the country, Lavery fostered connections to UCI by serving as a mentor for a UCDC student who went on to complete the DASA program and launch a career in public health

Ultimately, Lavery and Auza, who earned his Ph.D. in engineering from UCI, settled in Southern California. Her work then turned to a focus on using demographic data and GIS mapping to aid higher education, first with the Santa Monica-based think tank RAND Corp, where one of her main projects was for the Texas Higher Education Coordinating Board. She parlayed that experience into a job with the California State University system, the country’s largest public university system

Although Lavery had regularly made gifts to UCI as an alumnus, her workplace experiences with the higher education sector reinforced the importance of supporting public education. At RAND, in particular, she saw how research proposals for the military were easily supported, while education research seemed to be constantly seeking funding. Now she is a donor and member of the School of Social Sciences Alumni Network

“I donate to the UCI social sciences, no questions asked,” says Lavery. “I know the state money has been going away over the years, and it costs more to provide this world-class education and sustain a top-tier research university than what we paid as students.

Career growth
For the past five years, Lavery has worked as a product engineer on the Living Atlas Policy Maps Team at Esri, a company that provides GIS mapping and analytics software that’s used by companies and government organizations as they leverage data to tackle challenges from COVID-19 to climate change.

“We decide how the software should visualize data in a certain way, and make a series of maps that policymakers are going to want,” explains Lavery. “We take a step back and say, American Community Survey data is a big topic for governments, and it comes with margins of error, so let's make sure our products can display that error on the map without confusing people.”

Lavery brings a valuable perspective to the team, based on her years working in the public sector, coupled with her educational foundation in social sciences and economics.

“I would not have had any of my full-time jobs without the DASA program,” Lavery says. “Sociology and social sciences turn out to be a strong thread in data analysis, because you shouldn’t just make a visual map because the data is convenient. You need to know what people are interested in understanding, and to see the bigger social fabric.”