The American Dream in Irvine

the american dream in irvine

How Emily Ha, business economics and public health policy major, is crafting her own version 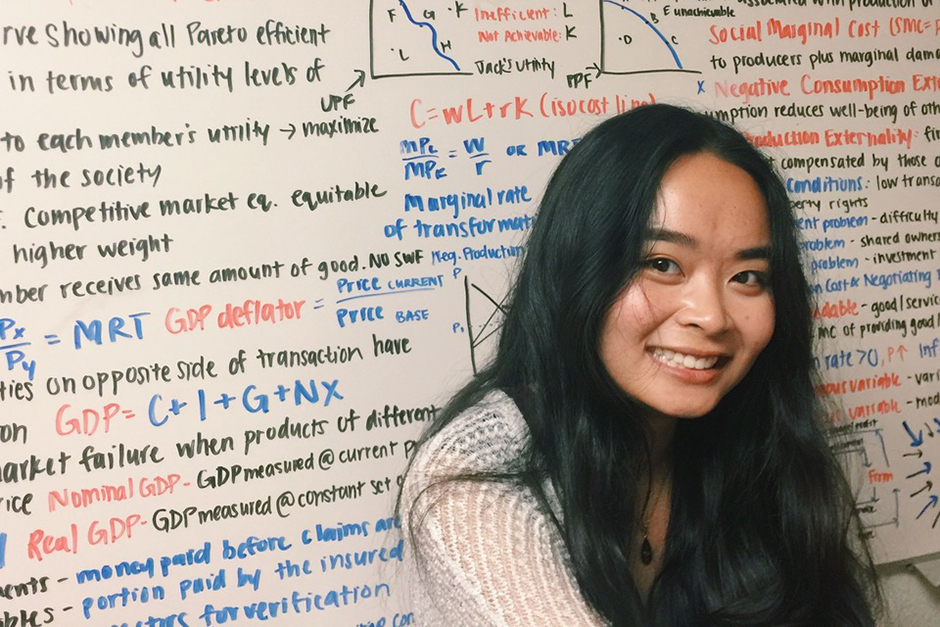 The American dream means different things to different people, but a constant theme for many is opportunity. This is particularly true for Emily Ha, a senior business economics and public health policy major, who’s capitalized on every opportunity that’s come her way.

First-generation support
Ha’s parents, Vu and Thanh, provided for their family as an auto mechanic and laboratory worker, respectively. They didn’t have the chance to go to college, but they believed that higher education was the path to a bright future for their two children.

“My parents saw it as the key to unlock a lot of opportunities: higher education is what is needed to pursue a dream career,” Ha says.

While a student at Sage Creek High School in Carlsbad, she involved herself in many extracurricular activities, a positive experience which sparked an interest for her to do the same in college. When weighing her options, Ha sought an environment where she could immerse herself in the community and design her own experience. When she visited UC Irvine, Ha found the campus to be vibrant and felt “welcomed and valued.”

“UCI is one of the best schools for the American dream,” she says. “I came to this school knowing that there were a lot of resources on campus for first-generation college students like me, and I knew that I would be supported throughout the experience by faculty and staff.”

With many of her Anteater peers also first-generation college students, Ha found camaraderie and support navigating college life. One of her biggest supporters was her resident advisor, Julie Clauss, who quickly became a friend and mentor.

“Emily has an exceptional drive to pursue new challenges,” says Clauss. “Since her first day at UCI, Emily has been an excellent role model for her peers, and she will be a leader among leaders wherever she goes.”

Saying “yes”
One of the reasons for Ha’s collegiate success has been the many campus activities in which she has involved herself. Ha made a pledge as a first-year student to “say yes to as many opportunities as were presented to me, even if it scared me.”

This mindset has led to a rich and diverse college experience, which includes work with the Anteater Ambassadors Network, the English Conversation Project and the Beginnings of Activism for the Department of Asian American Studies (B.A.D.A.A.S.). She turned her experience in the latter into a formal research project – “Symbolic Interactionism: Perception of Wealth Inequality in Singapore” – with faculty advisor and mentor Judy Wu, director of the UCI Humanities Center and professor of Asian American studies.

“Emily is clearly both an intellectual and community leader,” says Wu. “She was eager to seek out unique learning opportunities and invested in using her educational training for the betterment of the community around us.”

She also chartered the UCI chapter of the Prison Education Project (PEP) under the guidance of Long Bui, associate professor of global and international studies. Through PEP, UCI students teach classes (now virtually) on career development and interpersonal skills at 17 California and four international correctional facilities. She’s particularly interested in the impact this program and others like it can have on reducing repeat incarcerations.

I came to this school knowing that there were a lot of resources on campus for first-generation college students like me, and I knew that I would be supported throughout the experience by faculty and staff.

“Education is a really creative solution to the increasing rates of recidivism in our criminal justice system,” she says.

Bui celebrates not only the success of the program, but also champions its student leader. “Emily is a powerhouse who can do anything!” he says. “She is committed to the school, community and restorative justice.”

Study abroad in Singapore
Saying “yes” was also easy when Ha was presented the chance to study abroad in the fall of 2019. Wanting an academically rigorous program, she chose the National University of Singapore.

Her experience in Singapore, coupled with the current global pandemic, fueled her interest in pursuing healthcare policy and transformation as a career. She has her sights set on the U.S. which she says spends the most globally on healthcare but underperforms in care and outcomes. “I want to pursue a career where I can change that inefficiency and be able to help individuals get the healthcare that they need,” she says.

The next steps
After graduating in June, Ha will take a gap year before working on her master’s degree. She’s applied to both the Fulbright English teaching assistantship in Vietnam and Peace Corps health education programs with the endorsement of UCI faculty and staff.

Wherever she lands, she is sure to bring the enthusiasm, optimism and dedication she’s exhibited in her time on campus. For Ha, no doubt the American dream is well on its way to becoming reality.