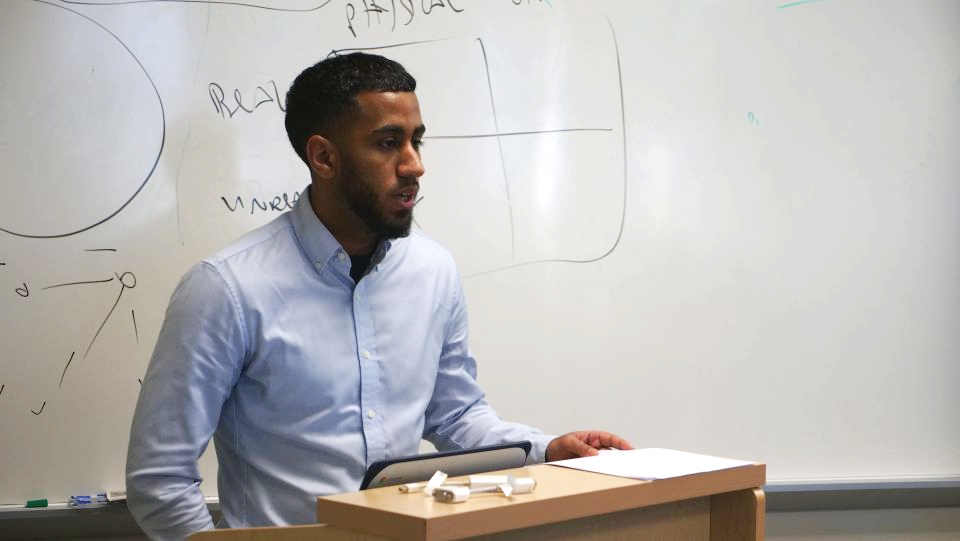 Tawfiq Alhamedi gives a presentation at an anthropology conference.

Tawfiq Alhamedi is studying a history of personal significance. The UCI doctoral student’s family is originally from Yemen, but his childhood in the Bronx was steeped in the Swahili culture of the East African coast – where his parents had spent a large portion of their lives before immigrating to the United States.

“As a kid, there always were Swahili influences. The dishes we would eat were Swahili, from the Tanzanian coast,” says Alhamedi, who’s finishing his third year at UCI. “As I learned more about the region and its history, it was completely mind-boggling because, here in the U.S., my parents would simply say that we were from Yemen. That was the shorthand.”

Other people categorized him as Arab American, but Alhamedi also felt a sense of connection to East Africa.

“I’m a person of color, so I had to deal with those confrontations of Americanness and figuring out where I fit within the United States,” he says.

“And then I was also dealing with being identified as Arab, which I am, but I don’t speak Arabic and I’ve never been to Yemen. In addition to this, I do have these other connections to East Africa.”

He headed to Lafayette College in Easton, Pennsylvania, for his undergraduate studies, and these personal questions merged with academics in a new way. Alhamedi grew interested in the histories and cultures of people who migrated from the Arabian Peninsula to East Africa—cultures that straddled the Arab world and Africa.

Now, as an anthropology Ph.D. student in the UCI School of Social Sciences, he’s looking at the migrations, imperial histories and postcolonial legacies that continue to shape coastal East African politics and culture. And he’s doing so with a prestigious grant that he earned from the National Science Foundation (NSF) Graduate Research Fellowship Program (GRFP). Alhamedi is among an impressive group of 46 UCI graduate students who received NSF GRFP grants for 2020/21. He’s using the grant, which provides three years of funding over a five-year period, for his final years of doctoral studies.

‘A very good fit’
A Lafayette professor who had earned her Ph.D. at UCI was the first to suggest that Alhamedi explore the university for his own doctoral studies.

When he arrived for a recruitment interview at UCI, he already knew about the strong reputation of the Department of Anthropology, which offers guaranteed funding for at least six years for doctoral students. He also knew about the department’s lauded scholars who have strengths in migration studies.

What also impressed him was the welcoming community – and the chance to work with scholars across the anthropology department.

“I could tell right away that there was a deep sense of community, which was important for me being so far from home. Everyone has their own projects, but they support each other and want to help each other,” he says. “It was a very good fit for me.”

A big part of anthropology is that nobody is ever really right. We’re all just caught in this ball of complex relationships.

Foundational workAlhamedi visited Dar es Salaam and Zanzibar, along Tanzania’s coast, during a gap year that he took after earning his undergraduate degree in 2017 and before starting his doctoral studies. He stayed with family relatives, and he visited again in 2019.

Since then, he has been dedicating significant time to attaining advanced fluency in Swahili with the help of a personal tutor. The language barrier proved to be the biggest cultural hurdle during his previous trips. He also puts in the work to ensure he has a strong foundation for his future studies, says mentor Anneeth Kaur Hundle.

“He’s done a wonderful job of learning from faculty in the department, incorporating feedback and taking initiative with the advice he’s given,” says Hundle, UCI anthropology assistant professor and Dhan Kaur Sahota Presidential Chair of Sikh Studies. "I’ve seen his project ideas and writing become more strong and clear over the past year or so.”

In the first half of his doctoral studies, Alhamedi focused on understanding the history and contemporary debates in anthropology, synthesizing the current scholarship and, perhaps most importantly, figuring out the questions to ask.

“You have to be the person figuring out what your project is and what the research question is, while being in conversation with faculty, peers and research and fieldwork communities,” Hundle said. “In order to do that, you have to develop strong critical thinking, critical reading and writing skills. You have to be able to synthesize existing scholarly work, so you can extend and build on it and understand your own ideas and motivations of your own research project.” 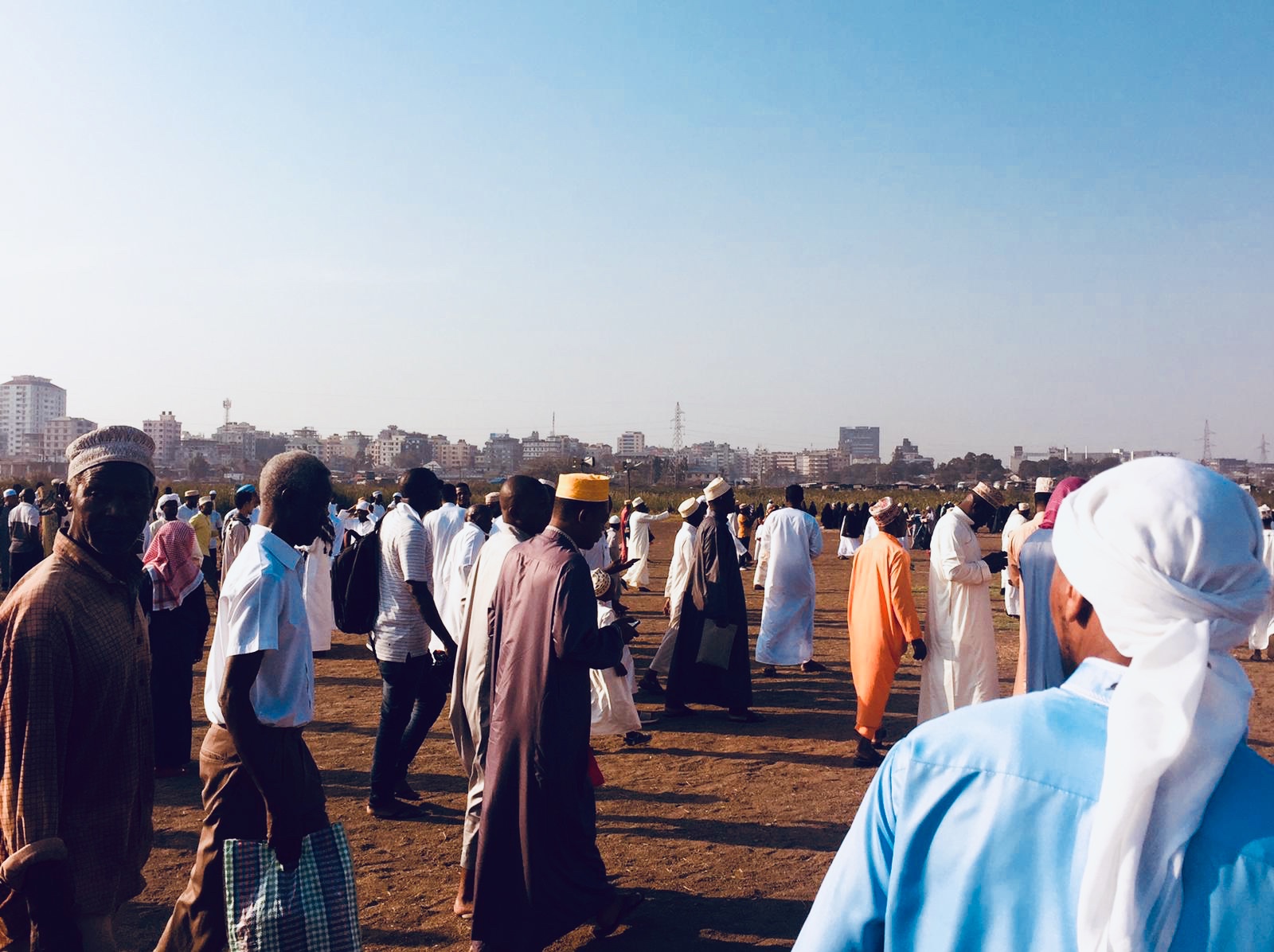 He’s now in the next phase of planning his fieldwork amidst the COVID-19 pandemic after having received dissertation research funding from both the Wenner-Gren Dissertation Fieldwork Grant and the Social Science Research Council International Dissertation Research Fellowship. This past year he’s been exploring online research methods, combing social media and blogs of both locals in Zanzibar and the diaspora. He also has been contacting Zanzibari professors, journalists and intellectuals. Alhamedi intends to employ a combination of digital ethnographic methods and in-person fieldwork for his funded research projected to start this upcoming fall, as Tanzania and Zanzibar have remained open for travel. This has involved him carefully modifying his in-person fieldwork methods to include socially distanced participant-observation and interviews alongside increased digital research and archival work.

An artificial boundary
Historically, studies of migration have tended to focus on people moving from the global south to the west, with less analysis of older migrations within the global south, Alhamedi said. However, in centuries past, multiple networks of migration developed around the Red Sea and the Indian Ocean.

“The dichotomy that we tend to think of between ‘Arab’ and ‘African’ – the boundary between the Middle East and Africa – is very artificial,” he said. “We’re taught to think of these regions as two separate things. But in reality, the people on the coast of Yemen are closer to the coast of Somalia and Ethiopia than a lot of places in the Middle East.”

Multiple waves of migrants from the Arabian Peninsula landed in East Africa, predating the rise of Islam in the 7th century, and continuing in the 13th and 19th centuries. There also were waves of migration to and from other regions around the Indian Ocean, including Southeast Asia and India.

Alhamedi is dedicating his studies to the islands of Zanzibar because they are uniquely situated at the boundaries of Africanness and Arabness in the Indian Ocean. The islands were brought into union with Tanganyika in the 1960s, but many Zanzibaris choose to emphasize and invoke memories of the region’s past as distinct from the mainland. There is even a movement advocating for Zanzibar to be autonomous from the Tanzanian union.

Alhamedi plans to explore how African nationalism is intersecting with Zanzibar’s unique past – all of which is informed by multiple layers of identity, histories of empire, Islam and slavery in the Indian Ocean.

“A big part of anthropology is that nobody is ever really right. We’re all just caught in this ball of complex relationships,” Alhamedi says. “But in anthropology, it’s not just our job to examine the past so we can come to terms with it and see how it informs the present. We also can imagine how to create new futures.”