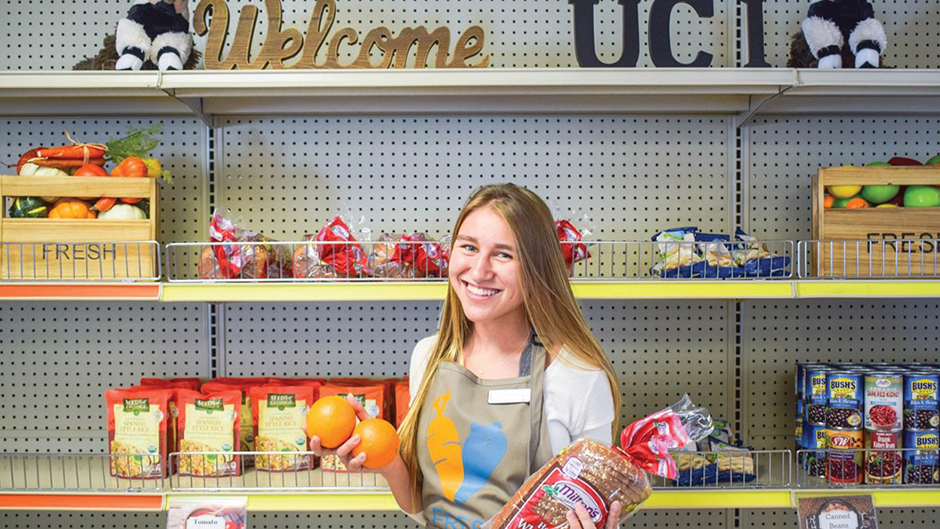 Running up to 60 miles a week, Keely Boyd makes daily deposits of determination. As a member of the UC Irvine women’s cross country team, she trains to endure. She pushes against terrain and through pain in pursuit of a tangible finish line, all the while measuring herself against both the opposition and the stopwatch. Being geared for the grind also serves the junior political science and education major in her on-campus job, which involves a seemingly unconquerable climb. “This is a problem for which I don’t see a light at the end of the tunnel yet,” Boyd said of food insecurity, the somewhat benign term for students who don’t have consistent access to food for nutritious meals.

“Actually, 44% of students at UCI are projected to have food insecurities,” Boyd explained. “And it doesn’t affect just one group. It goes across the board.” Boyd said she learned of the issue as a freshman when she stumbled upon a campus food pantry that had opened in 2015. A larger facility, the 2,630-square-foot FRESH Basic Needs Hub, opened in September 2017 and is the largest food pantry in the 10-school UC system. “When I found it, it was a really tiny food bank,” Boyd said of the initial pantry. “You could literally put your hands on both walls.”

Boyd was immediately moved to lend a hand, first as a volunteer during her freshman and sophomore years. This year, she is a paid member of the FRESH team, which during the 2017-18 school year served 83.5 tons of food to 3,243 unique visitors who made 14,926 visits. The program also generated more than $40,000 in monetary donations. The pantry, which gets new shipments daily, offers fresh produce, canned, dried, refrigerated, and frozen items at no cost to students. In addition, the FRESH store has its own kitchenette, cookbooks, and a variety of seeds for those interested in growing their own vegetables.

The program, run by Basic Needs Coordinator Andrea Gutierrez, also offers emergency food swipes, emergency grants, CalFresh application assistance, toiletries, consultations with nutritionists, and workshops as part of a life skills series. “We serve around 700 students a week who come in and get what they need,” said Boyd, who is passionate about the program’s ability to benefit her fellow students.

“Most of my close friends know I work at FRESH and that I am a little obsessed with it,” said Boyd, who estimates she works 10 hours a week. “I am running in [NCAA] Division I and doing this job I care about more than anything in the entire world. If I didn’t have this job, I’d still be volunteering, because in the end, it’s something I really love. People joke that when I graduate, I’m going to have to leave my dream job and work some place I don’t like as much.” Boyd said she regularly dispenses FRESH pamphlets kept in her backpack, and she has given presentations about the program in classes on campus. She takes every chance she can to publicize the program.

“Keely is someone who is really special, in that she is always thinking about others and how decisions and actions in the world impact other people,” said Chris Evans, who coaches UCI distance runners. “She is always looking to make a better impact on the world.” Boyd, a former individual CIF San Diego Section cross country champion at La Costa Canyon High School in Carlsbad, also volunteers with the Best Buddies program that pairs students with people with intellectual and developmental disabilities. She said she came to UCI with the goal of becoming a teacher. “I wanted to try to make an impact on a grass-roots level,” said Boyd, who noted that involvement in FRESH is among the factors that helped broaden her career vision.

“I took a law class just for kicks and I just got into political science,” said Boyd, who would like to eventually pursue an advanced degree and possibly attend law school. “I just really liked the idea of making change on a policy-side level. When I stumbled across the food bank and the [food insecurity] problem that lots of people deal with, the two things kind of connected. Now, I can’t see myself going any other way.” Boyd, who has surpassed her individual running goals this fall as a consistent member of her team’s top five scorers, said she is also giving thought to solutions for other issues facing fellow students.

“I definitely think about my future every day, wondering about what the next step might be,” Boyd said. “Personally, I have some goals for FRESH as well. I’d love to maybe work toward getting affordable housing on campus. That’s something that students, through FRESH, are advocating for.” Boyd, who helped UCI finish fifth in the 2018 Big West Conference championships, the program’s best conference showing since 2008 - said she occasionally ponders big questions while training.

Evans said he sometimes thinks about how Boyd will impact others in the future. “I can’t wait to see what Keely is doing in 10 years,” said Evans, who enthusiastically praised Boyd’s work ethic and dedication to his program. “When people learn I work with college students, they always start to bash them and say things like ‘Kids these days …’ My response is: ‘Yeah, you have to meet kids these days, because if you meet someone like Keely, you know the world is going to be a better spot in 10 years because of what she is doing.’”

how to make YOUR MARK

The UCI FRESH Basic Needs Hub is a student-initiated effort that promotes equitable access to basic needs through student empowerment, community collaboration, and institutional integration. The hub’s aim is to shift cultural consciousness toward understanding the fulfillment of basic needs, which include food and housing security

Each fall, the School of Social Sciences partners with FRESH to help stock the shelves through an alumni and community-based food drive. We invite you to join us in donating needed items anytime you’re on campus and have some resources to spare. The hub is located at:

Learn more - and give online - at bit.ly/GiveFRESH.