Alumna Catherine Griffin, ’86 economics,
shares experiences that made her an Anteater for life 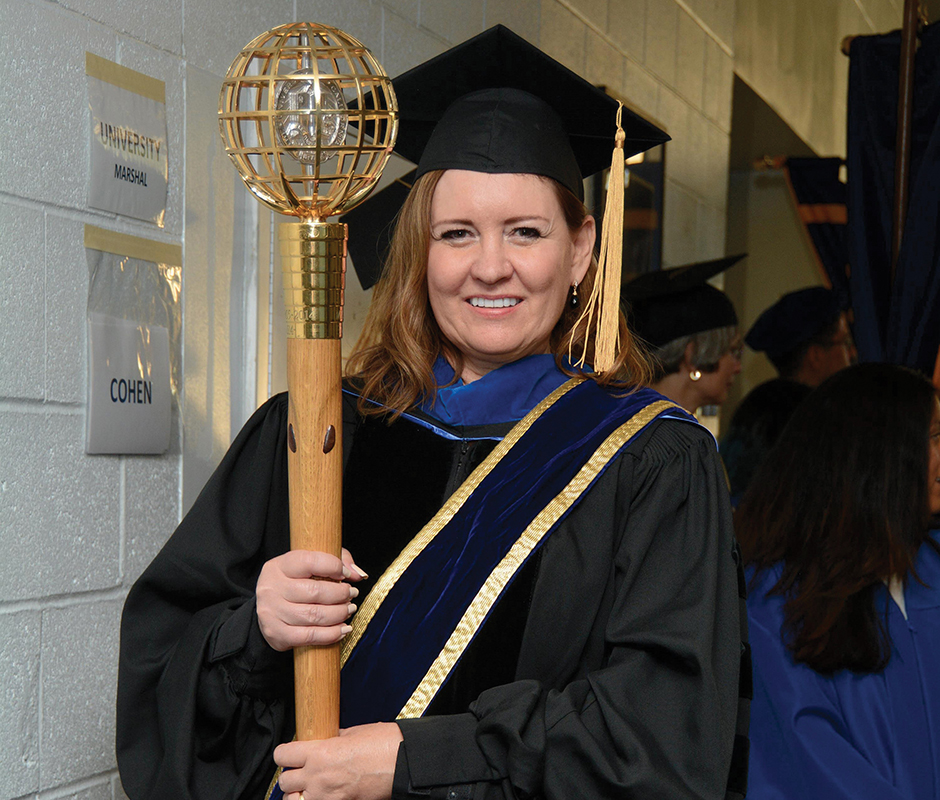 While many consider commencement the official end of their university experience, the word commencement, in fact, comes from the Latin word for beginning. For Catherine Griffin, who graduated from the School of Social Sciences in 1986, it was just that: the beginning of a lifelong relationship. Three decades after UCI founding Chancellor Dan Aldrich handed her a diploma, Griffin once again donned regalia at commencement 2017, this time carrying the ceremonial mace as her daughter Victoria received her degree. Many things have changed on campus over the years, but Griffin’s involvement remains consistent. She serves on the Social Sciences Dean’s Leadership Society and acts as a mentor for hundreds of sorority women. “I’ve kind of never left UCI,” she laughs.

Academic foundations
Griffin arrived in Orange County as a baby, soon after UCI opened in 1965. She fondly remembers her father, an engineer for Northrop Grumman during the height of the space race, spending lots of time at the new campus library. Although she considered attending colleges on the other side of the country, she picked UCI to his delight. After a year, she chose economics as her major because it seemed most closely related to the entrepreneurial spirit that she so admired in her dad, who by that time held several patents. Although the courses mostly focused on economic theories, she says the experience equipped her with the skills to succeed in business. “They taught me how to think, know when to get help, and have confidence in myself,” she says.

After graduation, she married her college sweetheart and fellow economics major, Michael, and they immediately set out building their new life together: not just as a family but as business partners. They bought, grew, and sold several businesses before becoming consultants for other companies. They make the perfect team. “He does all the marketing, sales, and future planning,” Griffin explains, “while I do the finance, HR, and dealing with banks and tax accountants.”

Over the course of her career, Griffin has proven her ability to turn any kind of business into a profitable one - from a dental practice in Atlanta to a senior living development in Lake of the Ozarks, Missouri. “You can have the best idea on the planet, but if you don’t have the business side figured out, you won’t be successful,” she says.

Making the university feel smaller
It was not only academics that laid the foundation for Griffin’s success. As a student, Griffin joined the sorority Tri Delta and served in various officer positions, each of which she says prepared her for her future career in some way, including hard skills like budgeting, and soft skills like having difficult conversations. “I still use what I learned from Tri Delta when I do an exit interview or when I have a disciplinary meeting with a staff member,” Griffin says. Today, Griffin supports and mentors new generations of UCI sorority women, serving in roles ranging from financial advisor to alumnae advisor. “Young women need to do what they can to make their university feel smaller,” she says. “To do that effectively, join a group.”

The impression these young women leave upon Griffin is so profound that she tears up telling the story of Arwa Tizani. An engineering major, Tizani was serving as the chairperson for an annual event where members invite a faculty member or dean to the sorority house for a social hour. Most of the students, including Tizani, were nervous about inviting a professor. To serve as a good example, Tizani invited the dean of her school. At the event, the dean was so impressed with Tizani that he announced he was nominating her for an internship at SpaceX. Tizani ended up serving as a project manager for UCI’s successful Hyperloop team, a competition sponsored by SpaceX, and now works for Elon Musk. “It’s one of the many stories I can tell about UCI and the difference it makes for these women.”

Forming faculty connections
While Tizani’s story is exceptional, Griffin advises all students to step out of their comfort zone to develop meaningful connections with their professors. “Students need to make an effort to meet their professors and their deans,” Griffin says. “If you don’t do that, if you just show up to class and don’t build relationships with faculty, then you’re missing out on the true university experience.” Griffin continues fostering strong relationships with faculty, including Bill Maurer, social sciences dean. “As a UCI parent and a proud member of the Anteater family, Catherine is always ready to jump at the chance to help others,” says Maurer. At his invitation, she’s presented at the school’s Family Weekend, sharing her experience and helping other parents support their college student in finding a mentor.

“I’m grateful that dean Maurer continues to give me opportunities to help parents and their students to identify a strategy that will maximize their experience here at UCI,” says Griffin. One person who’s benefited from Griffin’s advice is her own daughter, Victoria. She says, “students should go talk to faculty because doing so changed my life. “Since Victoria grew up visiting Tri Delta and the School of Social Sciences with her parents, it might seem logical that she would follow in her parents’ footsteps and become an Anteater. But that almost didn’t happen. Instead, Victoria chose to study environmental politics at UC Santa Barbara, until a series of tragic events including the Isla Vista shooting, in which two of her friends died, led her to transfer to UCI after two years. Victoria says she found it much easier to follow her mother’s advice to meet with professors at UCI. “At office hours, professors welcomed me with open arms,” she says.

Students need to make an effort to meet their professors and their deans.

Giving back
In 2017, when Victoria graduated, Griffin was selected by the School of Social Sciences as the mace bearer, an honorary role for a distinguished alumnus of the school. When Victoria’s name was called to receive her diploma, she walked across the stage and presented a sash of appreciation to her mother. “I put it around my mom’s neck, and we both burst into tears and hugged each other,” she says. Thankfully, her dad caught the dramatic moment on video. It was a picture-perfect moment for this family of Anteaters. “Being involved and engaged here at UCI has been a huge blessing to me and my family,” Griffin says.

Victoria remains inspired by her mom’s selfless support not just of her, but of hundreds of young women she encounters. “It’s not just Tri Delta, not just UCI; it’s amazing the way she’s able to connect with women in their mid 20s and she just plugs them into her network. She’s not doing it for herself, she’s doing it for the sake of that specific young woman who needs her help.” Griffin, who has made it a lifelong pursuit to give back to UCI, encourages the young women she works with to also consider giving back.

“I tell them, if this experience was meaningful in any way, you need to give back. And if you do that, your own degree will become increasingly valuable.” Of course, with a husband, business partner, daughter, and countless young mentees, the value of Griffin’s UCI degree is already beyond measure.