From ordinary to extraordinarius

from ordinary to
EXTRAORDINARIUS

Michael Arias was a 20-year-old college dropout when he was hired at UCI as a clerk in the copy center in 1978. When he retired 40 years later, he was the foremost advisor to the chancellor and the highest ranking staff member on campus - not to mention an honors graduate from the School of Social Sciences. It was hard work and good humor that carried Arias from a job running a Xerox machine the size of a car to one managing the inner workings of a top-10 public research university. In May, he received the Alumni Association’s highest honor, the Extraordinarius award.

Go-to guy
Growing up in a working class family in Santa Ana, Arias attended UC San Diego for a short time before returning home for financial reasons. With shoulder length hair and a disarming smile, Arias happily worked full time in the copy center of the School of Physical Sciences, duplicating documents for everyone from accountants to the future Nobel Prize-winning chemist Sherwood Rowland. A quick study who was good with budgets, Arias soon drew the attention of officials in the executive vice chancellor’s office, who invited him to apply for a job with the academic budget team. Arias had to borrow a colleague’s blazer and belt for the interview. But soon enough, he would have his own closet full of suits and ties. 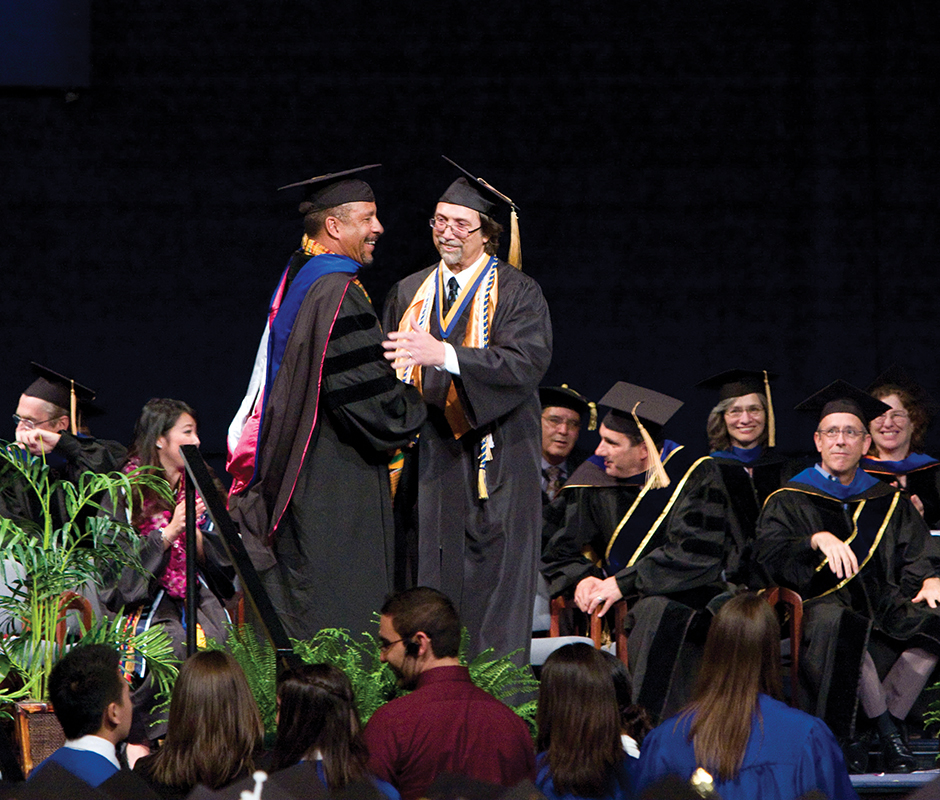 At the age of 50, Mike Arias went back to school, taking classes at lunch and nights, and finishing his bachelor’s in the School of Social Sciences.

He went on to serve as assistant dean in the School of Social Sciences, chief of staff for three executive vice chancellor & provosts, and eventually as associate chancellor and chief of staff for Chancellor Howard Gillman. Because of Arias’ long history with UCI, many administrators - especially those who were new to the campus - sought his advice. “When I arrived as provost and executive vice chancellor in 2013, Mike played a critical role in helping me become quickly and successfully acclimated,” wrote Gillman in his message announcing Arias’ retirement in 2018. “I relied greatly on his deep knowledge of the university and insightful advice.”

Arias’ job roles, and the trust he built with colleagues, meant he was at the center of many significant projects through the years. This included the development of UCI’s strategic plan; the establishment of the Sue & Bill Gross School of Nursing, the School of Law, and the Susan and Henry Samueli College of Health Sciences; the planning and construction of the UC Irvine Douglas Hospital; the construction of two student housing complexes and the Anteater Learning Pavilion; and the planning for the Interdisciplinary Science & Engineering Building.

“In many respects, Mike built the processes and offices that sustain the campus, from operations to finances and academic programs,” says Bill Maurer, dean of the School of Social Sciences. “Mike is the Horatio Alger of UCI.” As the university grew from a sleepy commuter campus into a mature institution, Arias became the go-to fixer, called in to diffuse disagreements, resolve conflicts, and advise on crises. 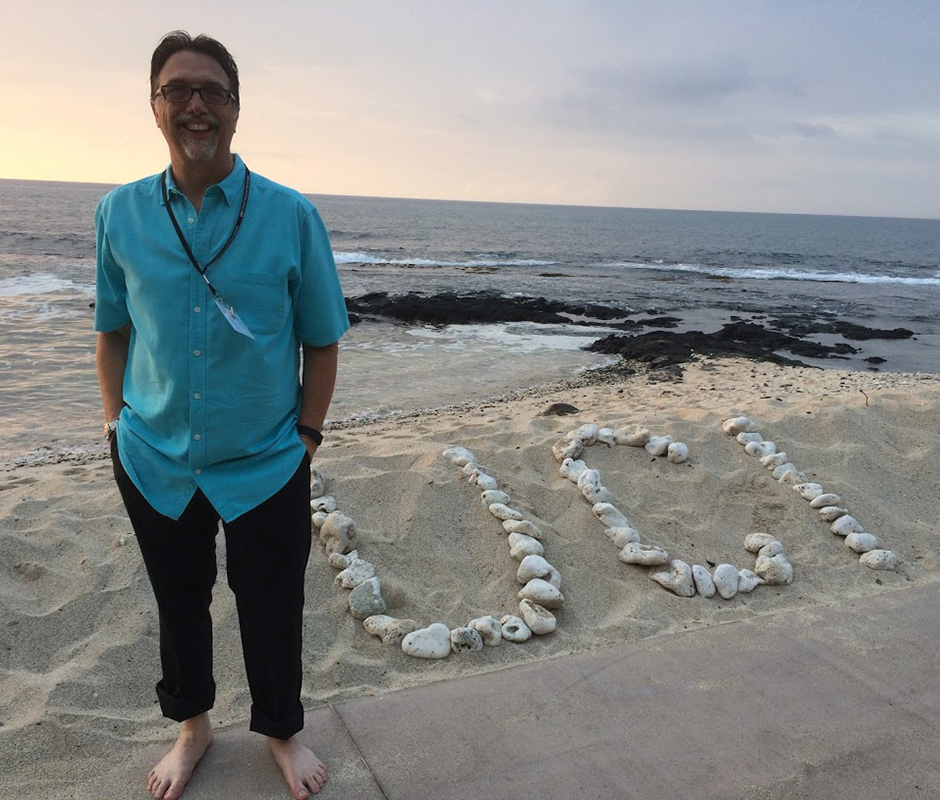 Since retiring from UCI in 2018, Mike Arias is enjoying relaxing, traveling, and spending time with his family.

I somehow evolved into a role where I looked after people, and found good fits for people, where they could thrive. That’s hands down the best part of my time at UCI.

A guide for many
As Arias grew professionally, he made a special effort to mentor others, guiding countless faculty and staff in their careers, many of whom wrote heartfelt letters supporting his nomination for the Extraordinarius award. They shared stories of how Arias took them under his wing, coached, and guided them through various professional challenges - usually over a cup of coffee and with a healthy dose of laughter. “Whatever the subject, Mike used humor or found a gentle way to get to the heart of any matter,” says Doug Haynes, vice provost for academic equity, diversity, and inclusion, who considers Arias a mentor.

“Mike reached out to offer a regular monthly mentorship meeting to help guide me in my new role,” she says. “I had no idea these meetings would span the next nine years of my career and provide me with profound guidance and support.” For Arias, mentoring others in their careers at UCI has been his proudest accomplishment. “I somehow evolved into a role where I looked after people, and found good fits for people, where they could thrive,” said Arias. “That’s hands down the best part of my time at UCI.” 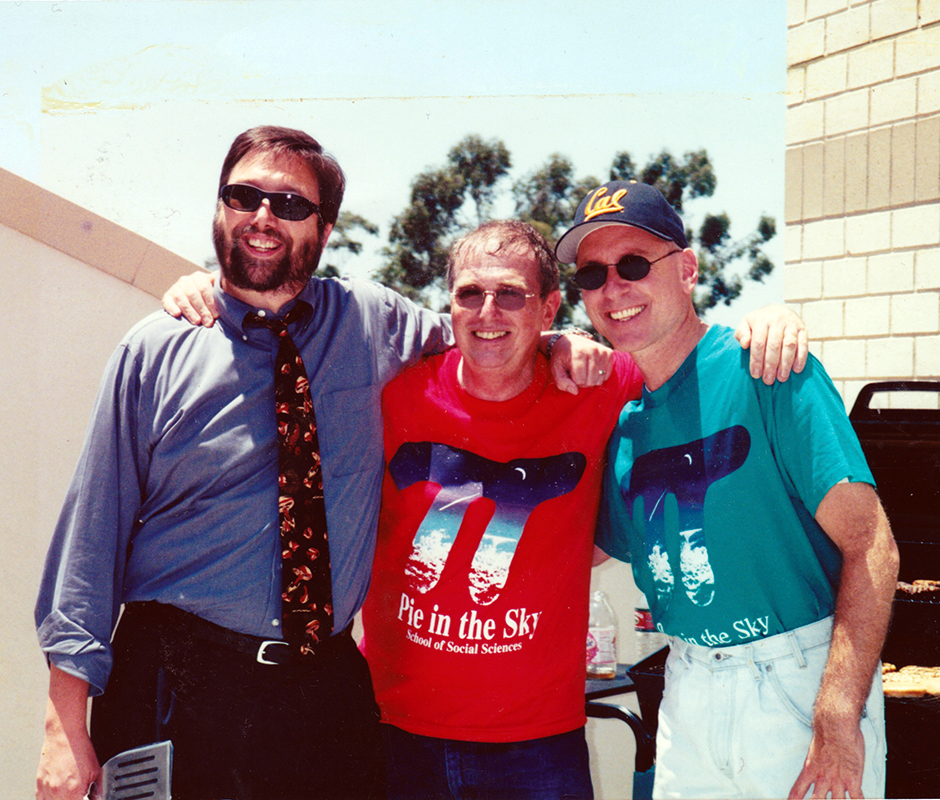 “I don’t want to sound like it’s all altruistic,” he adds, in typical self-effacing manner. “I benefited from people looking out for me and after me, and I felt it was important to do the same for others. UCI is a better place because of its people.” Some say UCI people are better because of Arias. “Michael, more so than anyone I know, has had a major role in the development, mentoring, and support for staff at the university,” says Michael Gottfredson, who served as executive vice chancellor & provost for 12 years.

Back to school
It would be impossible to spend so much time at an institution of higher education without feeling the shadow of his unfinished degree, and indeed Arias thought several times of finishing his bachelor’s. “For a while, I really wore the absence of a degree like a badge of honor,” he says. But at the age of 50, Arias realized it would be better for the university and for the leaders he worked for, if he got his degree. Arias went back to school, taking classes at lunch and nights, finishing his bachelor’s in the School of Social Sciences in two years, while working full time in the EVC & provost’s office.

The best part of the experience for Arias was gaining empathy for what students go through - their profound sense of uncertainty and anxiety over finances, final exams, and finding a job. “It was important to walk a mile in the students’ shoes, especially after living in Aldrich Hall for a million years,” he says. “You think you can identify with what students are going through, but you really can’t. It was good for my soul.” When he graduated magna cum laude, Arias was inducted into the Phi Beta Kappa honor society, served as the secretary of UCI’s chapter, and used his influence on campus to waive the student initiation fee for incoming members.

New beginnings
After 40 years at UCI, Arias and his wife Linda, who is also a UCI retiree, are looking forward to relaxing, traveling, and welcoming their first grandchild this summer. But he expects to stay involved with UCI. Indeed, he can be found often enough on or around campus, sharing advice or old stories over coffee. He received the Extraordinarius award alongside other Lauds & Laurels honorees on May 23. “Mike is always easy going and self-deprecating, never really owning how truly wonderful he has been to so many,” Brusuelas-James says. “He is already extraordinary to so many of us.”