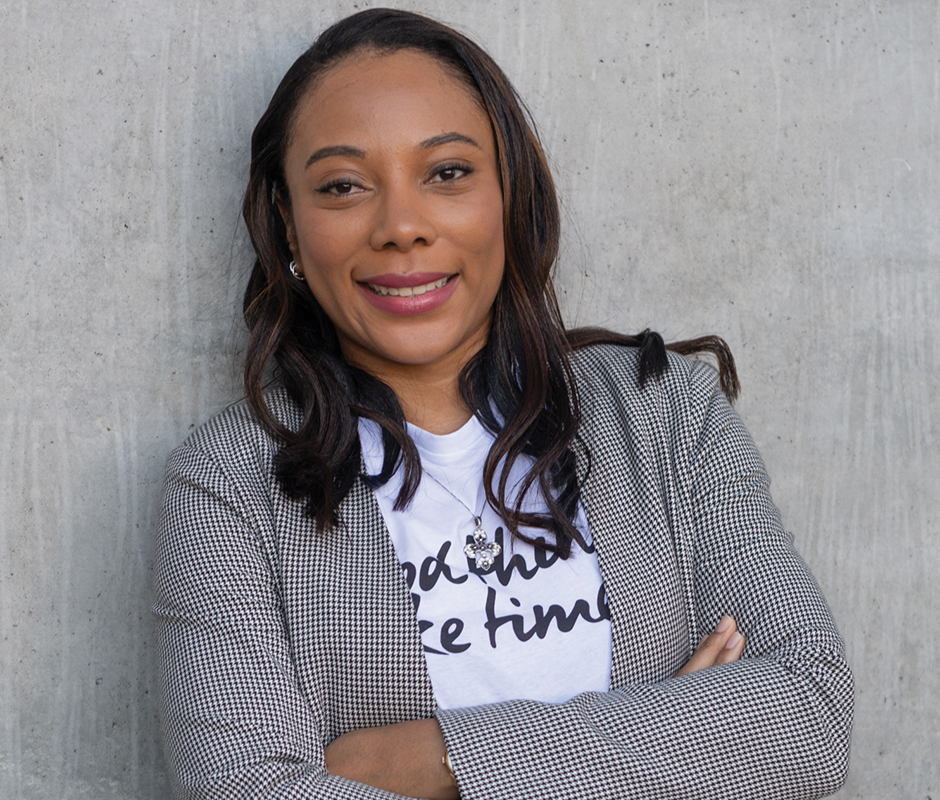 Leaning on both her personal experiences and her research, Monique Kelly works to make UCI an inclusive environment for graduate students.

Monique D. A. Kelly remembers her “aha moment” vividly. She was an undergraduate at a historically black college in North Carolina, Johnson C. Smith University, gathered around the table with a few of her Jamaican friends. She started, “We as black people - ” before her friends cut her off with their laughter. You, they said, are not black.

Today, Kelly is a sociology graduate student and the recipient of a UCI Chancellor’s Club Fund for Excellence Fellowship to support the final stage of her dissertation on race and skin color inequality in Jamaica. “If you ask anyone in Jamaica, they say it’s not race that matters, it’s only class,” explains Kelly. “Even though there is acknowledgement that race, or being lighter skinned, is attached with real or perceived social status, there is no connection to how these influence allocation of material resources on an institutional level in Jamaica.”

Kelly grew up believing that race didn’t matter and education was the key to social mobility, but there were subtle hints in her childhood that belied this. Raised in a working-class neighborhood in Jamaica, by a single mother, and living in an extended family home with her grandmother, aunt, uncle, and cousins, Kelly undoubtedly experienced class struggle. But strangers on the bus sometimes assumed that since she had lighter skin, her stop should be in a nicer neighborhood, or that she must be from a middle class family. Holding on to the concept that education was the key to social mobility, Kelly told her mom that she would never have to worry about paying for her schooling. Kelly made good on that promise, earning scholarships to a competitive all-girls high school where she was not only an excellent student, but an athletic star in track.

Determined to see her daughter advance socially, Kelly’s mother provided her daughter with experiences most working class children didn’t have, like classical piano lessons and training in voice and speech presentation. “I hated all of it,” Kelly says. “But my mom really wanted to push me.”

When she earned a scholarship to a college in the U.S., her family was extremely proud of her. As a sophomore psychology major, Kelly found a job as a research assistant for a professor. She laughs now, remembering that at the time, she cared nothing about the job except that it was a paid position. Soon, though, she distinguished herself as an excellent researcher, and that professor became her mentor. At the urging of her mentor, Kelly applied to the Inter-university Consortium for Political and Social Research (ICPSR) summer internship at the University of Michigan her second summer. It was there, while working on graduate-level statistics projects as a data archivist, that Kelly realized for the first time that she could have a future as a researcher.

Kelly came to UCI’s demographic and social analysis master’s program after she became aware of sociology professor Ruben Rumbaut’s work - in particular, the Children of Immigrants Longitudinal Study, which she used during a summer research project. By the time she completed her master’s, she formed lasting connections with other graduate students, and found another mentor and advisor, sociology professor Stanley Bailey. She decided to stay and earn her doctorate at UCI. For her Ph.D. research, Kelly used the AmericasBarometer survey data, and the Jamaica census, adding nuance to the quantitative data by conducting interviews with 25 Jamaican citizens living in Jamaica, the U.S., and the U.K. Her research debunks the claim that race has nothing to do with social mobility in Jamaica.

“Yes, class matters in Jamaica, but class is historically and contemporarily still tied to skin color and race,” she says. Why does this matter? If people don’t believe racism or racial inequality is impacting their lives, they are not going to push for policies that would end systemic racism. She’s already had one article published in a peer reviewed journal, with two more under review.

“Quantitative research on racial stratification in Jamaica is all but missing, and Monique is using existing datasets to make a badly needed contribution in this area,” says sociology professor Stanley Bailey, her co-advisor and co-chair. “Furthermore, her qualitative analysis brings in rich detail and thereby increases the exceptional contribution that her multi-method dissertation will make to the field.” One of Kelly’s frustrations is that many of her interview respondents - even though it was not a representative sample - did not see racism or colorism as a central social problem in Jamaica, purely because it is much more subtle than in the U.S.

“Everyone tries to apply U.S. standards, but the U.S. is so exceptional in how it handles race that it’s not really a good global standard,” says Kelly. “I want to challenge that notion, and talk about the contextuality of race and how it is applied differently in various contexts. It’s not enough to say it’s worse in the U.S. because it still affects people’s lives greatly in Jamaica.” Leaning on both her personal experiences and her research, Kelly works to make UCI an inclusive environment for graduate students. She serves on the Diverse Educational Community and Doctoral Experience (DECADE) School of Social Sciences Council, and she rarely passes up an opportunity to offer mentorship. She mentors first-year sociology graduate students, students in the UC Community College to Ph.D. Scholars Program, and students in the Competitive Edge Summer Research Program. She also serves as the mentor coordinator for the Sociology Graduate Student Association.

“All of my mentees have been females of color, and they need to know they’re not alone in whatever they’re going through,” says Kelly. She happily shares stories with them about stumbles she made early in her academic career, and how she learned from them. Soon, Kelly will be sharing her insights with a new group of mentees - and gaining new mentors of her own. She has secured a two-year post-doctoral scholarship at Michigan State University.

When Kelly graduates from UCI in June, she will have been in the U.S. for 11 years, become a citizen, and shed light on the realities of racism in Jamaica. Kelly’s mom, who immigrated to the U.S. several years ago, will also graduate this spring, with her associate degree from a community college in New York. Both women are a long way from where they started - both geographically and socially. “That’s one of the things that makes Monique so impressive,” says Bailey. “She is contributing exceptional research to the field of sociology while simultaneously navigating the ever-present structural disadvantages associated with her unique socio-economic and racial statuses.”