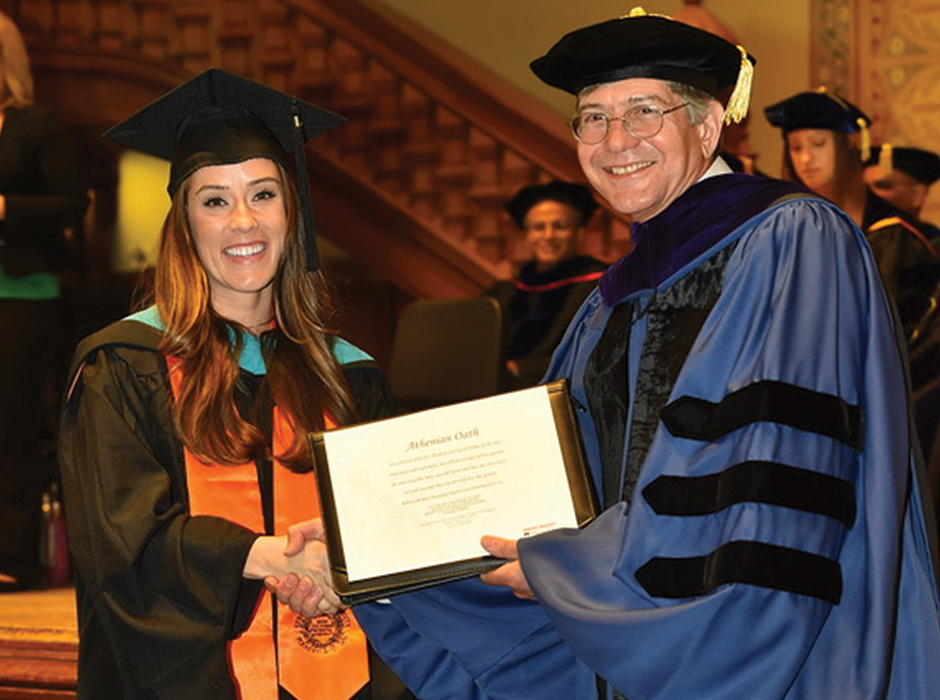 “UCI gave me a leg up on understanding the power of research,” says Keely Hanson. She went on to earn her MPA at the Maxwell School of Citizenship and Public Affairs at Syracuse University. She’s pictured here shaking hands with James Steinberg, former deputy secretary of state and former dean of the Maxwell School.

Keely Hanson ’11 uses social and economic policy research to understand some of the nation’s most complex challenges: inequality, poverty, the aftermath of natural disasters. It would be easy to get discouraged, but she’s brimming with optimism. As a policy associate in Washington, D.C. at the Urban Institute’s Center for Nonprofits and Philanthropy, Hanson provides data, policy analysis, and empathy to strategically advise foundations and nonprofits to more effectively tackle social problems and advance their impact.

For example, in the aftermath of Hurricane Maria, Hanson performed an analysis to measure the actual impact of philanthropic support in Puerto Rico - including high profile donations from celebrities like Ricky Martin - and point to where more resources were needed. The effort was personal for Hanson: she studied abroad in Puerto Rico as a UCI student. She still visits the U.S. territory each year and considers the island a second home. Hanson also manages a $3 million grant portfolio in partnership with the Robert Wood Johnson Foundation and performs research on equitable grantmaking - making sure that the barriers to applying for grants (such as resource constraints) do not keep small nonprofits and grassroots organizations from trying. She wants to ensure that not only the biggest, most established organizations win grants. “We need to get new ideas in there,” she says. “We face a number of pressing issues that require a lot of diverse thinking, so we need to include more people and new ideas in the process of solving them.”

Hanson tries to bring her unique experiences to bear through her work, too. “Not many people from my community get to be in the spaces I’m in,” she explains. Hanson grew up on California’s picturesque Monterey Peninsula, in the small working-class town of Seaside, a majority-minority city, where 15% of the population lives below the poverty line - a sharp contrast to the financial wealth of cities like Pebble Beach and Carmel-by-the-Sea, located just a few miles down the Pacific Coast Highway. “Because of my hometown and the peninsula I grew up on, I was able to understand from an early age what income inequality looks like,” says Hanson. “While my high school was extremely diverse, the metanarrative was that although we were all different, we all had something to bring to the table.”

If her community taught her about racial and economic inequality, it was her family that taught her to do something about it. Hanson’s father served in Iraq and Afghanistan with the Army National Guard, and stateside, he was deployed to aid the recovery after Hurricane Katrina. Although having a father away was hard for their family, it instilled in them a sense of duty. “I learned from my family the importance of doing something bigger than yourself,” she says.

As soon as she arrived at UCI as an undergraduate, Hanson began giving back to other communities. Back home, the Early Academic Outreach Program guided her to select courses that met the A-G requirements to qualify for a UC, and helped her apply to colleges. In turn, Hanson started working for EAOP at UCI as a freshman. Throughout her tenure at UCI, she worked at the Center for Educational Partnerships supporting a number of UCI’s outreach programs in both Santa Ana and LA County. Today, she still keeps in touch with some of the students she helped get into college. “Just last fall in D.C., I ran into one of my former students, who had worked for the Obama administration,” she says proudly, aware that in some ways, she helped him on his path just as others helped her.

As an Anteater, Hanson took advantage of numerous academic programs, all of which contributed to who she is today. She studied abroad in Cuba and then Puerto Rico, which sparked her interest in Latin American politics and led her to complete an honors thesis. She also did intensive research in the social sciences Summer Academic Enrichment Program. “My career today is not one I would have ever considered had I not done research programs like SAEP,” she says. “UCI gave me a leg up on understanding the power of research.” But one of the achievements she’s most proud of is being a Public Policy and International Affairs Fellow at UC Berkeley.

My career today is not one I would have ever considered had I not done research programs like SAEP.

She was rejected the first time she applied. So political science associate professor Caesar Sereseres sat her down and helped her map out exactly what she needed to do to qualify for the nationally competitive fellowship - including what classes to take and how to prove herself to be a budding researcher. After finishing the fellowship and graduating with honors from UCI with her bachelor’s in political science, Hanson moved to Miami and completed over 1,600 hours of service supporting high school students in Little Haiti as an Americorps member with City Year.

She stayed in Miami to work for the Posse Foundation where part of her role was making the case to colleges about students who didn’t have perfect grades but had the grit and determination to succeed in college - if only admissions officers would look beyond their GPA and SAT scores. Helping youth remains a major focus for Hanson. “Young people inspire me so much because they can face tremendous adversity and yet still carry hope in places we need,” she says.

Eventually, she enrolled at the top-ranked Maxwell School of Citizenship and Public Affairs at Syracuse University to earn her Master’s of Public Administration. It was there that she met professor Shena Ashley who would later hire Hanson to join her team at the Center for Nonprofits and Philanthropy, enabling her to scale her influence on community groups and nonprofits. “Through her research and engagement, Keely is helping to increase the potential for philanthropic capital to reach the grassroots changemakers of color who are bringing dynamic new ideas and energy for change in rural and urban communities across the country,” says Ashley, who is also vice president of the Urban Institute. “Furthermore, as a team leader, Keely is helping to build the next generation of engaged scholars who are essential to elevating the voice and expertise of the practitioners on the front lines of social change.”