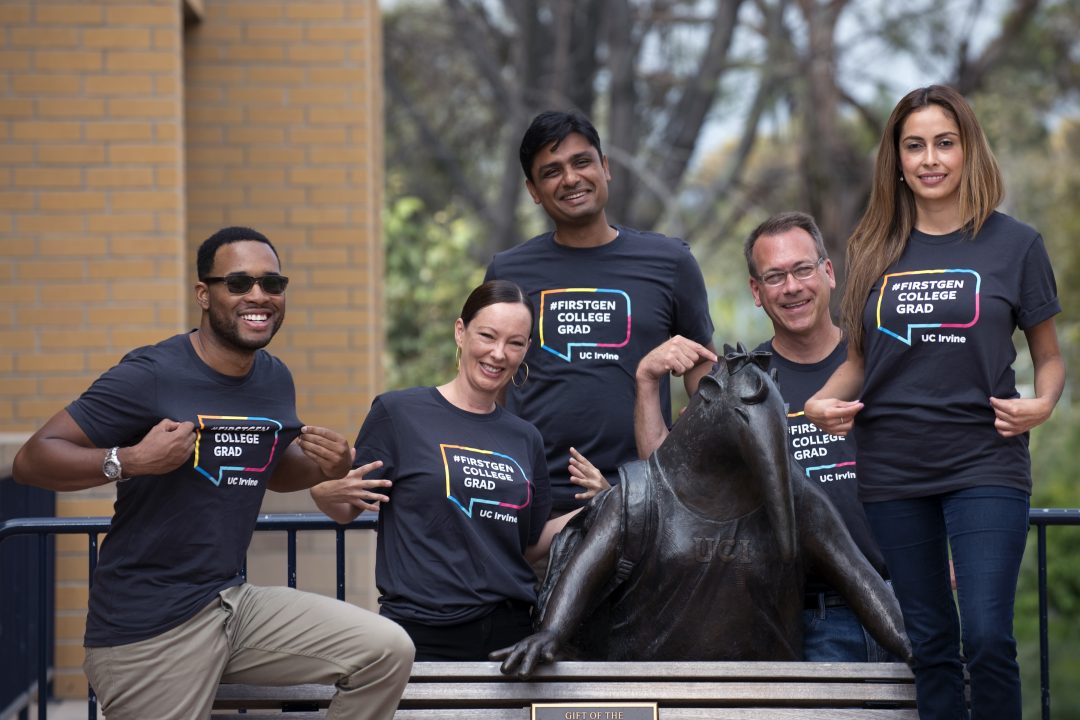 Professors at the University of California, Irvine, in an effort to support the 60 percent of students who are the first in their families to go to college, don distinctive shirts and buttons identifying themselves as first-generation graduates. They are part of an initiative started two years ago by Anita Casavantes Bradford, UC Irvine associate professor of Chicano/Latino studies, that aims to train relatable faculty as mentors and allies of undergraduates unfamiliar with college culture.

While these faculty members have a common mission, their stories are unique. Featured here are three soc sci professors who play key roles supporting students facing the same challenges they once overcame.

“By the time I was 8, I had figured out we were poor,” says Anita Casavantes Bradford, a UC Irvine associate professor of Chicano/Latino studies. A monthly ritual brought it home for her.

Hot Dog Day was a big treat at her Vancouver, Canada, elementary school. She longed for the multiple hot dogs and other goodies. Instead, “my mom got a scared and sad look on her face when she would sit down to pencil out the calculations for one hot dog and one milk. No doughnut,” Casavantes Bradford recalls. “It was always a time of anxiety and sadness.”

What I love about this program is that it not only helps new students, but also gives our upper-level first-generation students an opportunity to be recognized as experts. Not just as survivors, but as thrivers, as sources of knowledge.

That same year, she won the annual scholastic medal, awarded to the child with the best academic performance. “I had a very kind third-grade teacher who made me feel special,” she says.

Casavantes Bradford did her own math and realized right then that education was the way out of hunger and poverty. “If I didn’t want to be poor and afraid, I needed to be good at school,” she says.

She decided to be the first in her family to earn a high school diploma and a college degree. It was no easy journey. As a community college student, Casavantes Braford worked full time as a live-in housekeeper and nanny. As a first-generation student, she had no family members to turn to for advice on how to navigate classes, finances and extracurricular activities. She felt isolated and perpetually exhausted. 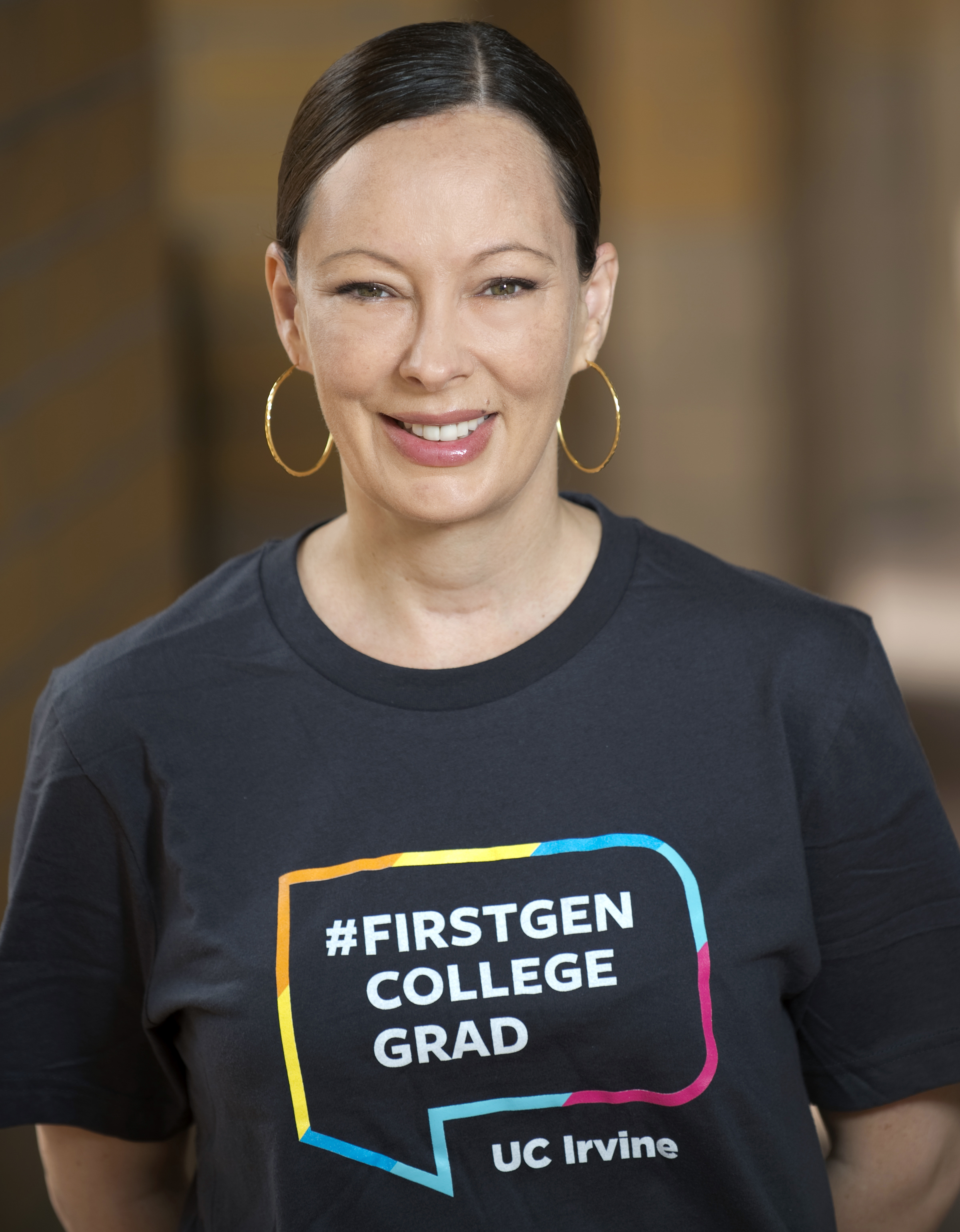 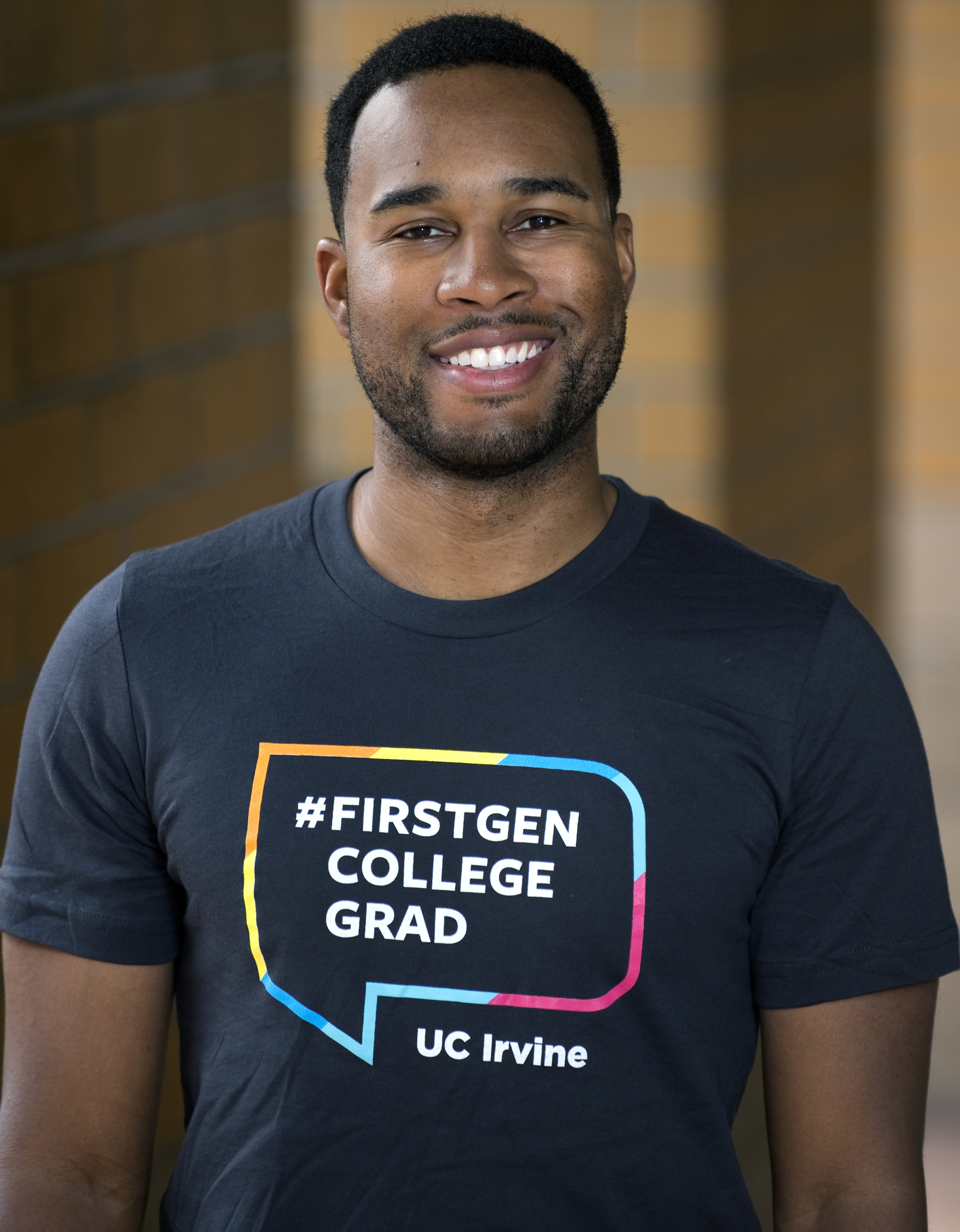 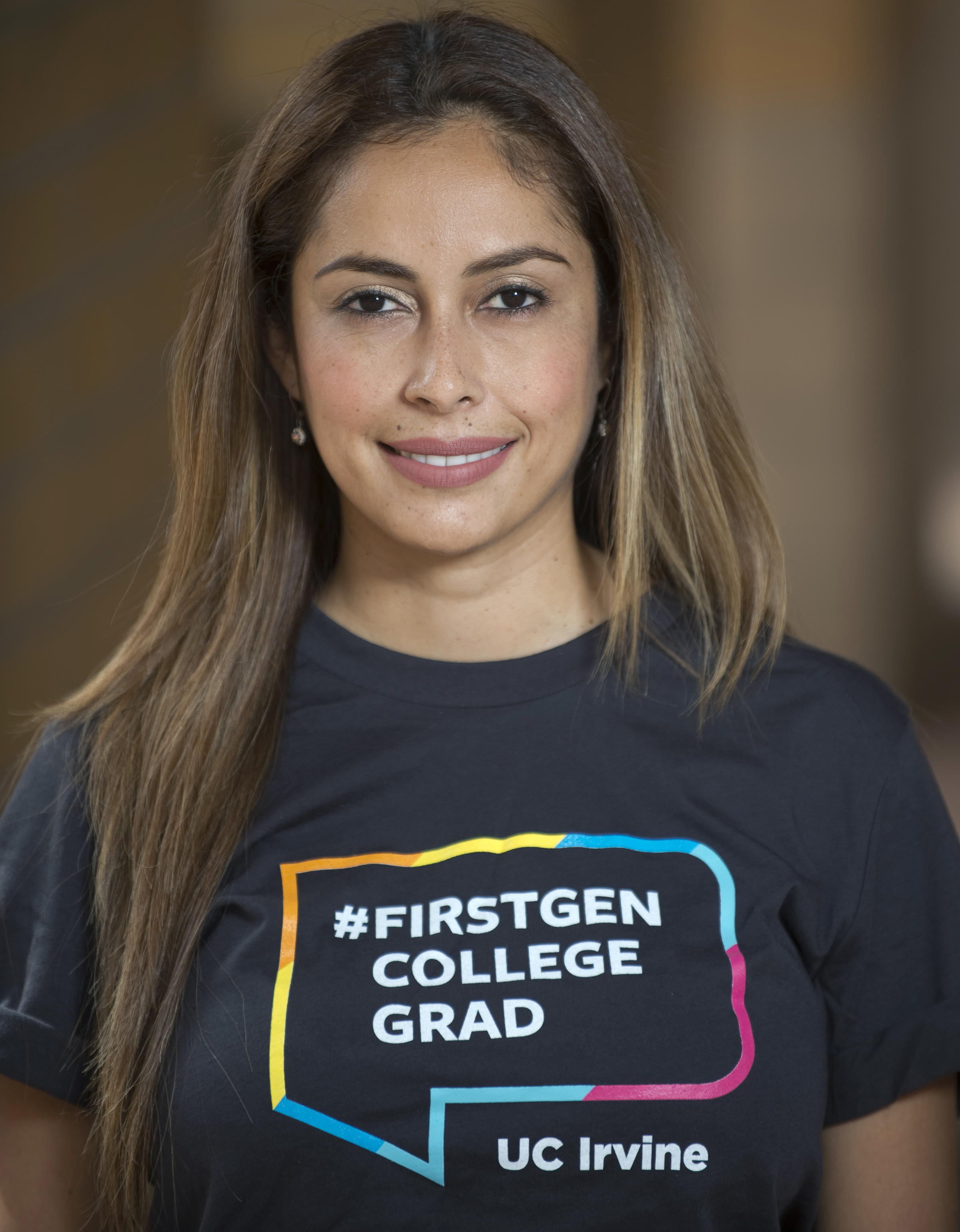 Casavantes Bradford made friends outside school, and a Latin American studies professor urged her on, telling her she should go all the way to graduate school. “I didn’t really take him seriously,” she says. “I didn’t think people like me got to go to graduate school.” But she persevered, transferring to a prestigious four-year university and earning a bachelor’s degree and a teaching certificate. Casavantes Bradford was a high school teacher by age 23 and loved it. She became engaged to a U.S. Marine and, to her surprise, was accepted as a doctoral student at UC San Diego. She’s been at UCI since 2011.

Asked if she sees young people in her classes that remind her of herself as an undergraduate, Casavantes Bradford replies, “Every day.” When she began teaching, she noticed that first-generation students in particular weren’t taking advantage of her office hours. She knew faculty advisers were critical to student success. Now she makes a point of telling each new class that she was a first-generation student. There are lines outside her door.

More than half of UCI’s current student body are first-generation students, and Casavantes Bradford and others want to ease what can be a daunting experience. She started a popular faculty mentoring initiative and she works with first-generation upperclassmen on a peer-to-peer mentoring program.

“What I love about this program is that it not only helps new students, but also gives our upper-level first-generation students an opportunity to be recognized as experts,” Casavantes Bradford says. “Not just as survivors, but as thrivers, as sources of knowledge.”

Davin Phoenix felt the weight of family expectations early on. As the only child of an African American mom on active duty in the U.S. Air Force, it was drilled into him that he would go to college and become an engineer.

“That was an eye-opening precursor, seeing the outcome of the election and realizing our political system is not running smoothly,” says Phoenix, now an assistant professor of political science at UC Irvine. “After 9/11, there was a new world order, driven further by the Iraq intervention.”

His small liberal arts college in Newport News, Va., gave him four years of freedom to study what he liked. Engineering faded, and his interest in the intersection of race and politics grew. Phoenix wasn’t sure how to make a living in political science, but he applied to graduate school and was accepted at the vaunted University of Michigan.

“It was easy to sink or swim, and oftentimes I felt like I was sinking. But I was able to make it,” he says.

Phoenix earned a doctorate in public policy and political science and is now in his fourth year of teaching and conducting research at UC Irvine.

Both the student leaders and the freshmen they will mentor are remaking the image of the American working-class household, Phoenix says.

“Many have very strong family ties and responsibilities, so they’re not just making their decisions on their own,” he says. “They’re carrying on their backs the desires and expectations of their parents and siblings too. It’s very meaningful to them how they approach school.”

He has received his own support, as both a student and an instructor. His mother came to visit him at UC Irvine and sat in on a couple classes.

“It was incredibly gratifying for me,” Phoenix says. “She was moved by seeing me in front of all these students who could engage with me. She could trust and see that I’m doing good work of a different kind.”

For many first-generation students, college is an economic sacrifice. Don’t be afraid to seek help, and be sure to see an academic counselor. 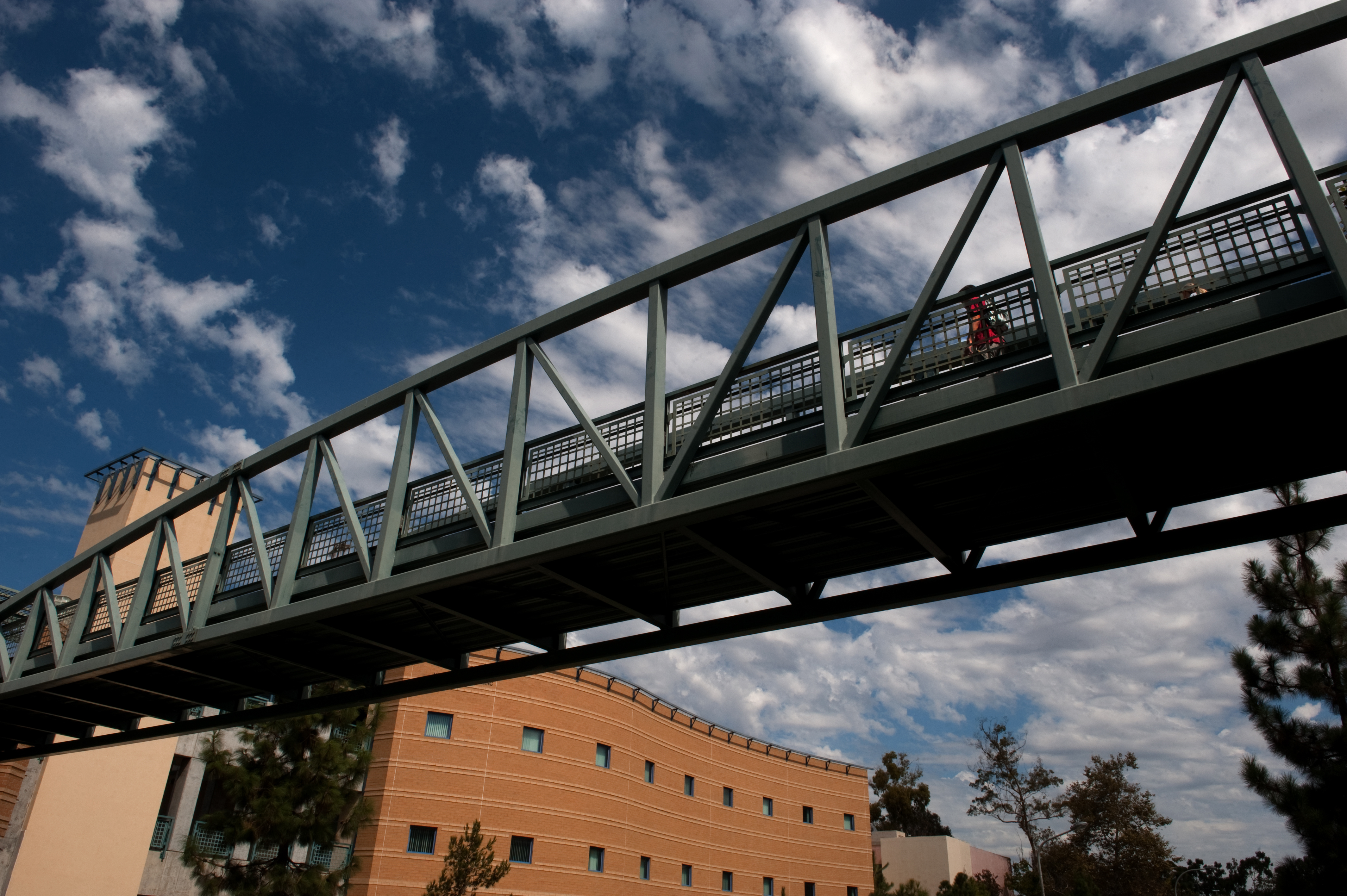 Working at a dry cleaner shop starting at age 10.

A third-grade teacher’s reprimand for solving math problems with a method taught by her Mexican immigrant mother.

Watching her construction worker father singlehandedly build his family a new house behind their old one on a “sometimes scary” Orange County street.

Talk for a spell with Chicano/Latino studies assistant professor Glenda Flores, and various out-of-the-ordinary memories emerge from her childhood in a rough Santa Ana neighborhood.

Although some folks might leave such environments and never look back, Flores – the first in her family to finish college – decided to return to her community to give back to other youngsters. Before graduating from UC Irvine, she had planned to work as a bilingual elementary schoolteacher in the Santa Ana Unified School District. But as controversy engulfed dual-language instruction programs and some efforts were dismantled, she switched to education research and went on to earn a Ph.D. in sociology at USC.

Her doctoral work grew out of observing white schoolteachers running classrooms full of students from blue-collar Latino families. Too often, Flores says, the teachers viewed ethnic cultures and practices as obstacles to learning, as was the case with her own third-grade math instructor.

“That childhood experience stuck with me,” she says. “And 20 years later, it’s still happening.”

Now back at UC Irvine, Flores has continued digging into the issue. Sitting in a third-floor office decorated with portraits of artist Frida Kahlo, she recounts spending two years interviewing educators and parents in Compton and Rosemead for a new book, Latina Teachers: Creating Careers & Guiding Culture.

It explores how Latino faculty preserve cultural identity among students, sometimes by surreptitiously “subverting workplace rules.” Her next book will focus on Latino physicians.

In addition to research and teaching, Flores mentors first-generation college students at UC Irvine. From her own undergraduate days, working two jobs to avoid being a financial drain on her parents, she knows the difficulties of trying to juggle study time with family obligations.

“For many first-generation students, college is an economic sacrifice,” she says. “Don’t be afraid to seek help, and be sure to see an academic counselor.”