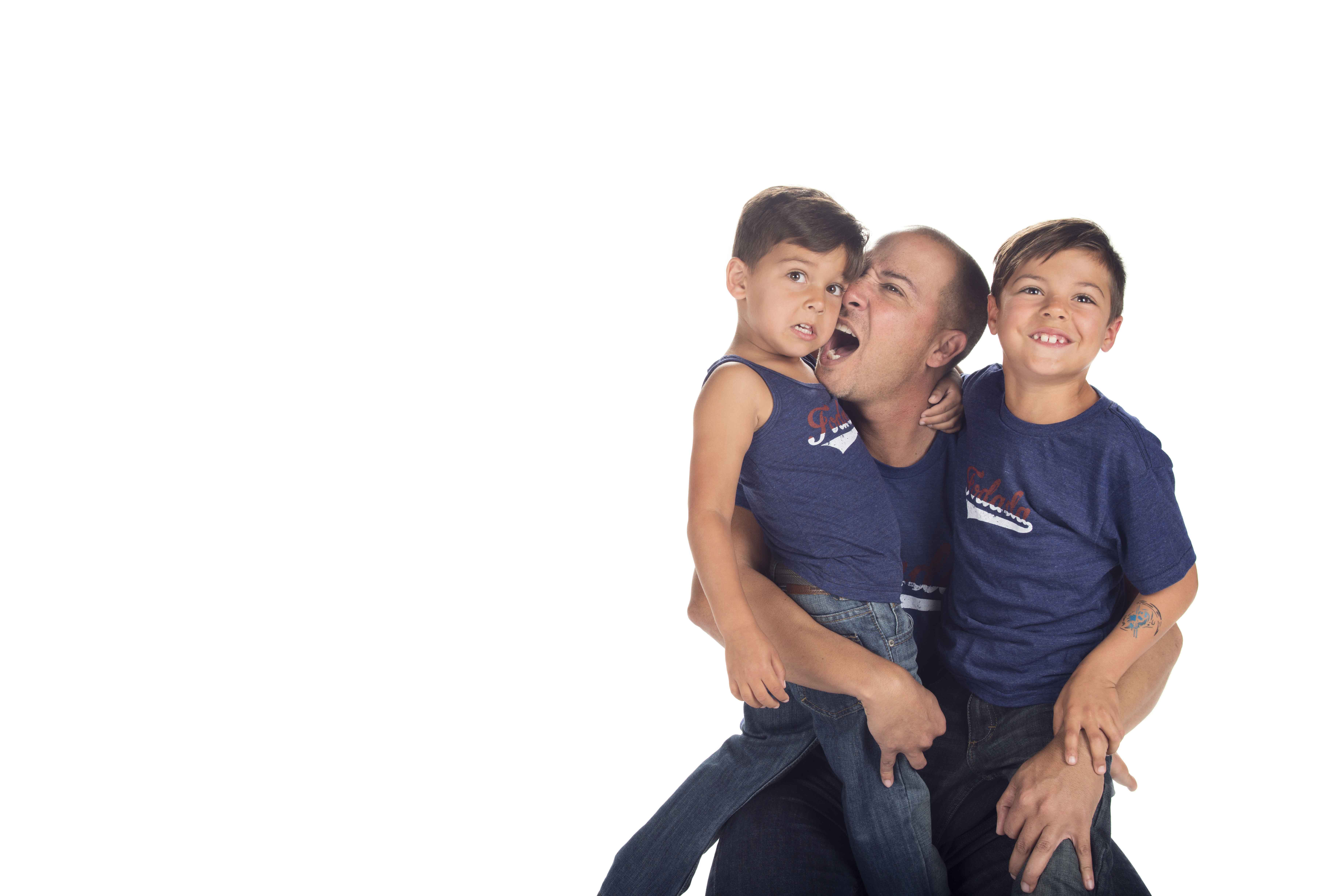 Fodada founder Bobby Barzi with his boys.
a l u m n i SUPER DADA

Bbby Barzi isn’t ashamed to admit that he sometimes finds himself singing along to Justin Bieber—one of his kids’ favorites—in the car. Sometimes even when his kids aren’t around.

“I guess that’s how you know you’re comfortable with yourself,” he jokes.

The economics alumnus, entrepreneur, and father of two—Pierce, 7 and Royce, 4—relishes these lighthearted moments; singing along with teen pop stars wasn’t always his M.O.

According to Barzi, becoming a dad changed his whole life for the better. But it also allowed him to notice that not all dads were as naturally open to those changes. That’s why in 2012 he founded Fodada, a global for-profit business that’s dedicated to fostering the invaluable relationship between father and child. Even the company’s name reflects that fatherly dedication—it was inspired by Barzi’s older son who, as a toddler, would bring his dad little toys and trinkets with the announcement, “fo’ dada.” 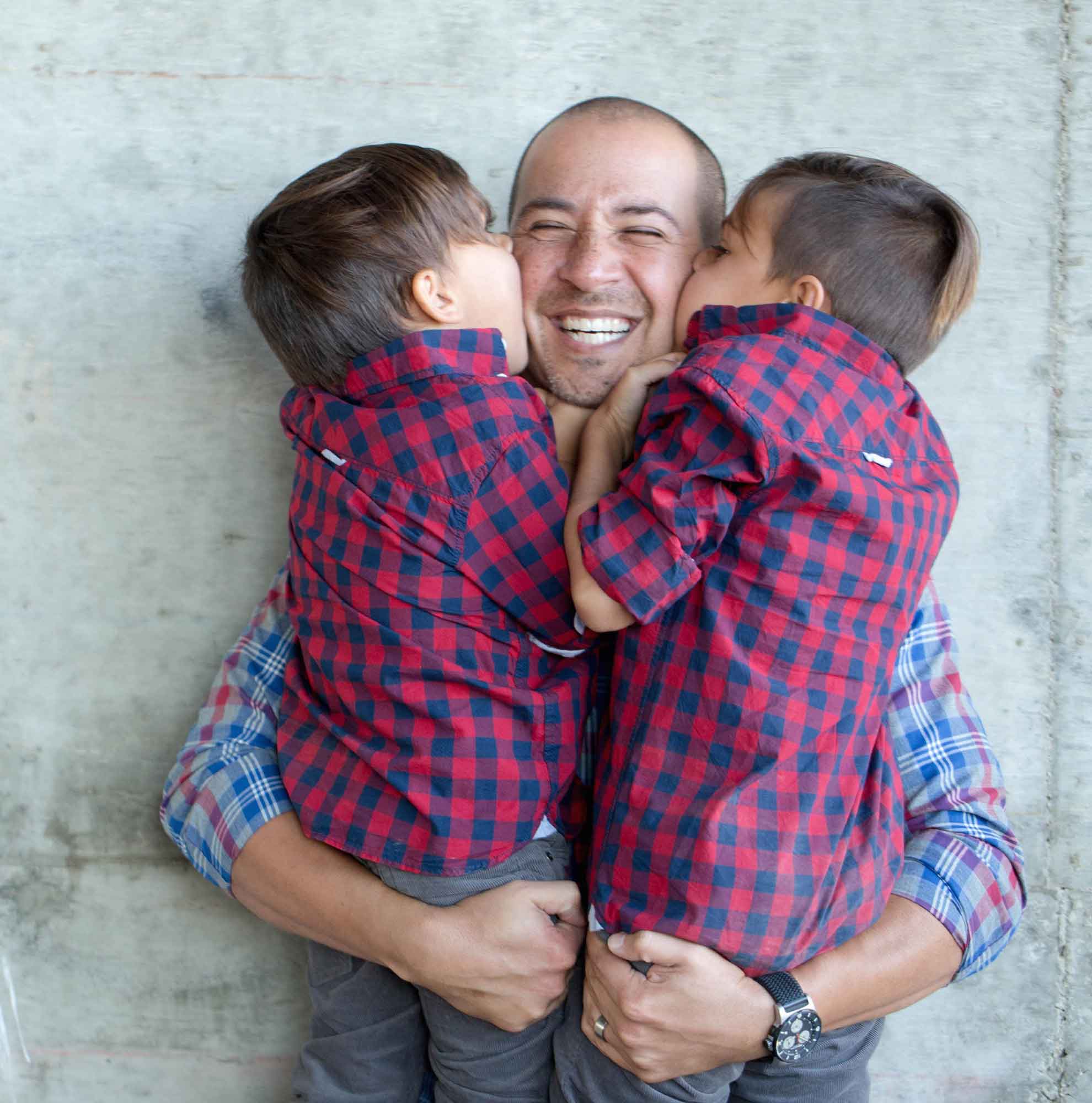 I am nothing like that traditional dad model, and I found so many other dads who weren’t either.

As a clothing company, Fodada creates everyday clothing for men, women, and children in addition to partnering with corporations for purposeful custom productions. But instead of pocketing all the profits, Barzi—known around the office as Chief Dada—has made it his mission to host events and activities for families around the globe that cultivate a community of like-minded dads.

The choice to create a company that gives back was not a random one for Barzi. He and his wife—Amanda Fowler, fellow social sciences alumna and executive director of global corporate giving for Edwards Lifesciences—have long made philanthropy a priority. Both of their careers are built on supporting those in need, and they still make time to volunteer as a family. In addition, both husband and wife support their alma mater as executive members of the School of Social Sciences Dean’s Leadership Society. Fodada fit into their lives perfectly.

One of the company’s biggest goals is to completely deconstruct the societal stereotypes around what being a dad looks like. Traditionally, the role is seen as less engaged than the mother—the “stoic breadwinner” as Barzi calls it. But that model is slowly changing. Dads today want to be involved with their kids and childcare tasks are being split more evenly between parents [for more on this, check out a recent study by UCI sociologist Judy Treas featured in this issue]. Still, he says the traditional expectations aren’t gone.

“I am nothing like that traditional dad model, and I found so many other dads who weren’t either,” he says. “But I also saw some fathers who were only comfortable being more engaged and involved within the box of their family. I also saw dads who didn’t have a close relationship with their kids, and not only how much their family was missing out, but how much they were missing out as individuals.”

Barzi finds that by hosting various activities, from yoga, to hiking, to science camps, such fathers are able to find common ground with their children while having fun and learning—an essential piece of the puzzle for him. In fact, there are four characteristics that Fodada strives for when planning activities: social, educational, active, and service oriented. By doing this, Barzi says that kids start to associate these fun and rewarding experiences with dad, which ultimately helps nurture a strong and productive relationship.

“The Dad and Me Program is meant to be kind of an excuse,” he says. “It’s a pre-programmed opportunity for dads to hang out with their children where they don’t have to try to come up with something on their own, they just have to show up and interact.”

Of course, UCI and the School of Social Sciences get in on the action, and have hosted several Fodada events. The School of Engineering hosted a monster robot-building event for Halloween, and last spring, the company partnered with the Department of Cognitive Sciences and the Cognitive Anteater Robotics Laboratory (CARL) to teach dads and kids how to program robots.

“It was so cool because I didn’t know how to do it, my kid didn’t know how to do it, so we learned together on the same level and goofed around, messed up, and had so much fun,” Barzi says. “And now every time we drive by UCI my son brings up that experience. It’s a great memory and in the process he learned and he got exposed to higher education.”

Barzi’s main criterion in choosing community partners is how the organization will help benefit the community. It’s why UCI has been such a solid player in the past; it’s what led to the company’s Red Beanie program—a partnership with the American Heart Association bringing awareness to heart disease and prevention; and it’s why Barzi recently chose to work with the Snakeriver Correctional Institution in Oregon to hold a special two-day camp for incarcerated dads and their kids. It’s estimated that close to 70 percent of children with parents in prison could end up in prison themselves. By giving these men the chance to be dads and role models, he hopes to help change that. 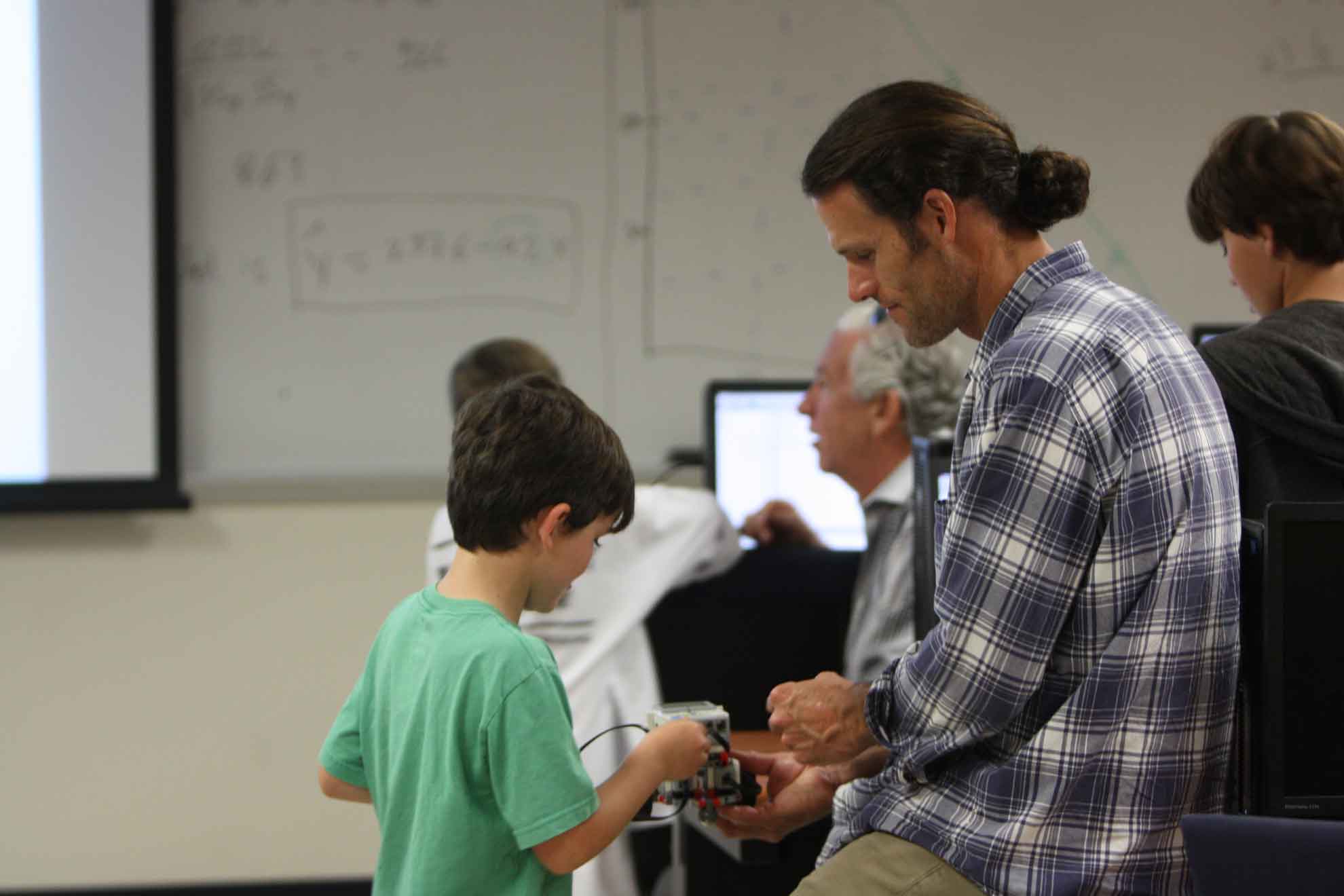 At one Fodada event, dads got to build robots with their kids with UCI’s Department of Cognitive Sciences and the Cognitive Anteater Robotics Laboratory (CARL)

Participating fathers had to first complete an 18-month program within the prison, working on parenting and life skills. Those who followed through on their commitments were rewarded with a special visit from their children—some of whom they had not seen in five years.

The Fodada-coordinated activities included yoga, face-painting, bread-making, and overall bonding. It was a life-changing experience for both children and fathers, and one that Barzi hopes will help end the cycle of familial incarceration.

The program’s first year was a huge success, but Barzi isn’t planning to take a break from the work any time soon. They’re five years in on hosting the Fodada International Women’s Self Defense Day.

“The women’s self defense day came about because—as a father, a son, a husband—I care a tremendous amount about the women in my life—my wife, my mom, sister, the daughters of my friends who are almost like my daughters,” Barzi says. “And I wanted to make sure that as fathers and husbands we were advocating for this concept of empowerment and women’s safety.”

Each year for the last five years, cities all around the world have joined together to host self-defense courses and seminars with Fodada’s help. From India to Pakistan to Singapore to right here in Orange County, women are learning how to protect themselves while their loved ones are taught the importance of empowerment and respect.

It’s an event that fathers can attend with their daughters, families can attend together, or that women can show up to on their own. It’s all about bringing something valuable to the community—even outside of Fodada’s typical demographic—because, as Barzi knows, the father, the family, and the community are all closely connected.

“At the core of it what we wanted to do with Fodada was start something that promoted, celebrated, and supported the role of a great dad,” he says. “Including what that means to everyone involved; the child, the father himself, the family, and the product that comes to the community.”

In short, Barzi recognizes the tremendous value in his relationship with his sons and wants to see everyone experience that joy.

“If I have a bad day, all I have to do is close my eyes and think about my kids for one minute,” he says. “And then whatever is bothering me doesn’t seem like a big deal any more. At the core of life that’s what it’s all about—that opportunity, that responsibility, that relationship with my family.”