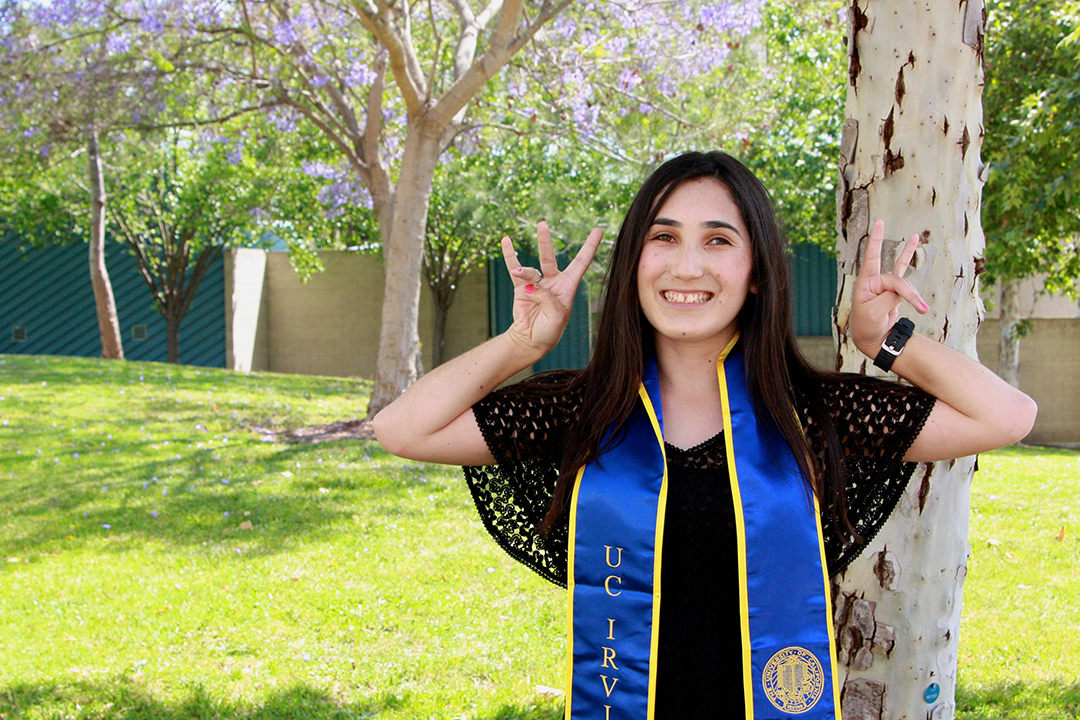 First gen grad Margarita Rodriguez ’17 isn’t letting cancer or anything else derail her plans to make a difference.
simply UNSTOPPABLE

When times get tough, graduating senior Margarita Rodriguez isn't one to back down

Most college students have a tough time adjusting during their first year. The stress of learning to take care of oneself, making new friends, juggling a heavy class schedule, and being away from family support can take a toll. At the end of the day, though, most persevere and join their peers in tossing their caps at the Bren several years later.

Margarita Rodriguez is no exception. A 2017 grad and psychology and education double major, she’s looking forward to her very own commencement, a sweet victory after some tumultuous years. But her success is even more incredible given the other unexpected and gut-wrenching challenges she’s faced since starting her UCI journey.

As a freshman, instead of going to parties or school-sponsored activities on the weekends, Rodriguez was spending the night in hospitals with her mother, who was diagnosed with cancer early on in her freshman year. And instead of spending her first college summer at the beach with friends, the first-gen student was preparing for a life-saving double mastectomy that would cause her to put her education on hold for a quarter. Not exactly the typical college experience. But where others may have – understandably – chosen to give up on school, Rodriguez forged onward, balancing her health and family life while she completed her bachelor’s degree with a double major to boot. Now things are in a more stable place for her and her family, she is set to graduate, and she was just accepted in UCI’s master’s program in teaching. If anything, her crazy whirlwind of a college experience has proven that she is pretty much capable of anything.

Rodriguez isn’t a stranger to stress. Even as a high school student, she was coping with various family illnesses while completing AP courses. Things became even more tense her senior year of high school when she and her father were both diagnosed with Li-Fraumeni syndrome, a disorder that makes one particularly susceptible to various types of cancers. Being only 18 at the time, it was a lot to take on, but she managed to finish high school and get college applications completed – a huge accomplishment as a first-generation student – while working on a treatment plan that included regular visits to an oncologist. With so much weighing on her personally, it’s no wonder that UCI’s calm and picturesque campus appealed to her.

“On my first visit to UCI, I was completely lost the entire time but I still fell in love,” she says. “There was this overwhelming sense of calm. It was a very peaceful and inviting environment. After that I didn’t want to see any other schools. I just knew from that point on that this was where I wanted to be.”

When she got to campus for her freshman year, she wrestled with the usual, new-student issues as well as those of a first-gen student. But when she got the phone call five weeks into her first quarter that her mother was diagnosed with Hodgkin’s Lymphoma, it was almost enough to throw her off completely. In fact, the only thing that kept her going was her mother’s insistence that she not drop out of school.

“It was such a mom thing,” Rodriguez says. “She said, ‘you’re going to take care of yourself and do what you need to do.’”

So she did. Even when it meant spending the night in the hospital in L.A. and driving back to turn in an assignment a day late (her professors were very understanding); even when it meant making up missed tests; and even when her oncologist told her, just as her mom was getting ready to finish her chemo treatments a few months later, that her scan indicated that she had a more than 90% chance of developing breast cancer before the age of 30. She was only 19.

The doctor told her that a prophylactic – or preventative – mastectomy was their best recommendation. She didn’t have to do it immediately and they obviously couldn’t force her to do it at all, but he said once she turned 23-25, then it would be an urgent conversation – if she didn’t already have breast cancer.

“I started thinking and realized there was never a good time for this, but I figured if there was going to be a time to do it, it would be then,” she says. “Because after that it would mean deferring grad school, plus I would be carrying the risk all those years, wondering, worrying every time I felt something even slightly off. I would have had to go in for checks almost every three months. It was a lot.”

To make matters even worse, Rodriguez had a midterm the day after she heard the news (she amazingly did just as well as she had done on previous tests in that class), and she was immediately on the path to finding out how quickly she could be back at school should she go through with the surgery. Ultimately she made the decision to visit the undergrad affairs office and discuss her options for withdrawing temporarily from the university. She says the support she received from the office, especially from academic advisor Kurt Hessinger who helped her outline her options, was what made the whole ordeal just a bit easier.

As she finished out her freshman year and prepared for her surgery that summer, she remembers being a bit in denial about having to withdraw, even temporarily, from UCI. She still remembers the day she went to the registrar’s office to pick up the withdrawal form, which she says had been sitting in her mailbox for weeks because she couldn’t bring herself to turn it in. Eventually, though, she had to put her plan in motion.

“It was a very tough thing for me – especially because I was the first in my family to go to college,” she says. “Just getting here had been such an accomplishment, and now to have to withdraw – and I had just gotten here, too. I honestly broke down in the undergrad office.”

But Rodriguez wouldn’t be an Anteater if she didn’t have a fighting spirit. She took the summer and fall quarters to recover from her surgery, and came back to UCI for her winter quarter ready to go. In fact, she had a whole new outlook on her educational experience.

“Having that time off gave me the perspective I needed – a perspective you don’t often get as a freshman,” she says. “It really did get me to focus on setting goals and figuring out, ‘OK why am I here, why am I at this school, and what am I going to do with my time at UCI?”

The answer to that question ended up starting with the Jumpstart UCI program, which she joined at the beginning of her third year. The national early education organization recruits and trains college students and community Corps members to serve preschool children in low-income neighborhoods. She immediately fell in love with teaching, and subsequently decided to add a second major in education. Around the same time, she found herself interested in language, thanks to some inspiring lectures by cognitive sciences professor Virginia Mann, who has since become a mentor for Rodriguez.

Rodriguez is wasting no time in starting her search for the perfect career; in the fall, she’ll begin UCI’s master’s in teaching program. 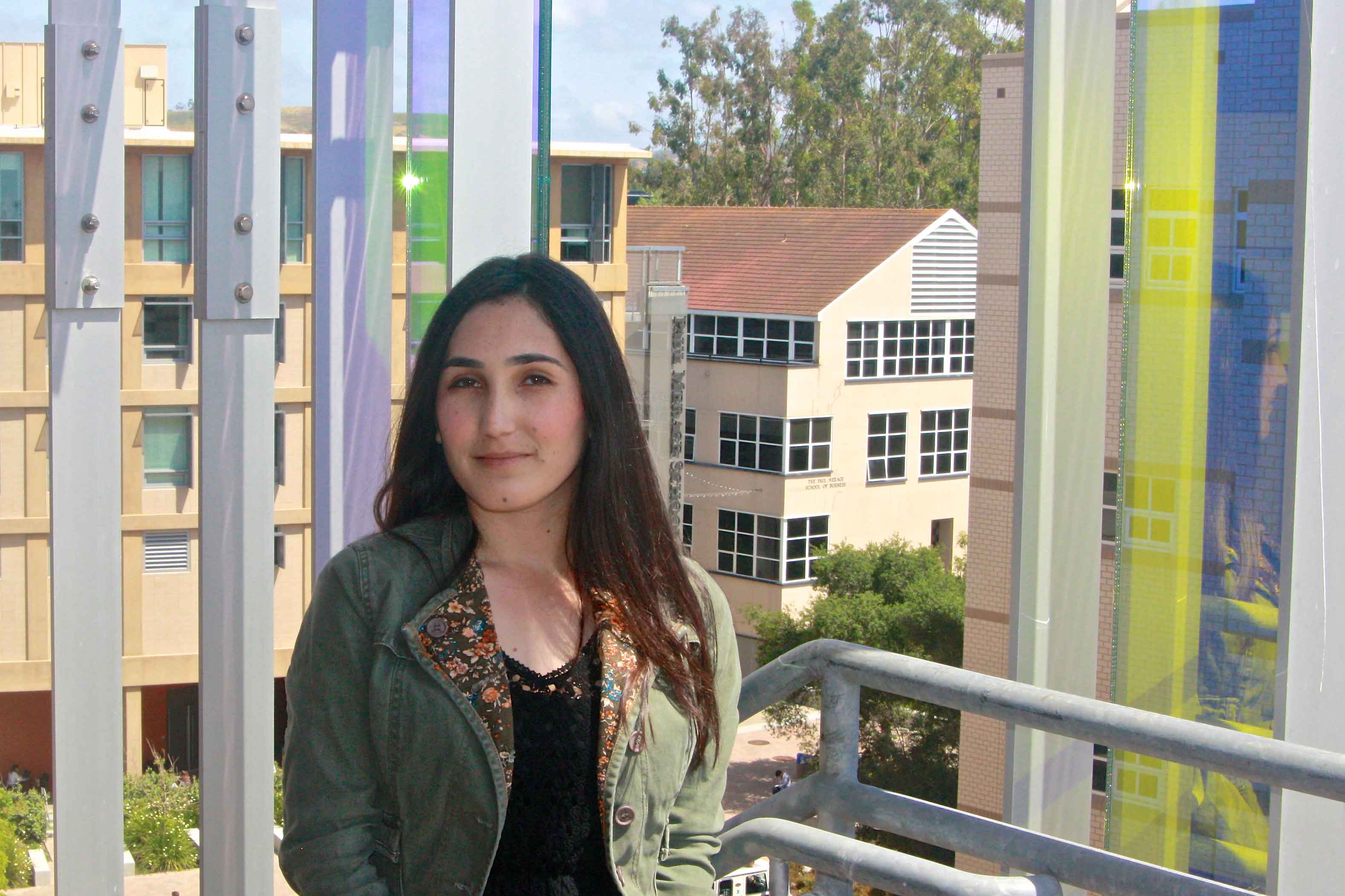 Having that time off gave me the perspective I needed – a perspective you don’t often get as a freshman.

She eventually found a way to merge her two areas of study – psychology and education – by researching specifically how learning a language is different for bilingual speakers versus monolingual speakers. She has now completed an honors thesis on the subject under the mentorship of assistant professor Julio Torres and associate professor Lisa Pearl, and discovered a passion for research as well.

But her real mission was always to help others, and UCI provided plenty of opportunities there as well. After being elected to the executive board of the Latino/a Student Psychological Association, she was able to help prospective first-generation students of color and their parents with the college process by coordinating the organization’s annual Padre Night. In addition, because of the incredible help she received from the School of Social Sciences Undergraduate Affairs Office throughout her time at the university, she joined the office as a peer academic advisor. And she doesn’t plan to let these kinds of roles get away once she enters the real world.

“It’s really about how I’m going to use my time here for the betterment of others,” Rodriguez says. “How am I going to impact others with my career?”

To find that out, she’s decided to embark on UCI’s master’s in teaching program in the fall. There, she will not only get more exposure to a classroom environment, but she will be able to see what issues there are in the education field – particularly with regard to bilingual speakers – and what can be done to remedy them. It’s a very researcher-like question, but she is keeping her options open for the time being.

“Right now I could start teaching, fall in love with this career and not look back,” she says.

“Another path I’ve been contemplating is teaching for a couple years then applying for Ph.D. programs in applied linguistics. From there I could use the classroom experience to see what we need to learn more about in terms of how we teach bilingual children. Right now I’m seeing which one pans out best.”

But she’s not worried. She says the one thing that’s helped her make it through these trials – aside from her incredibly supportive family – is her faith and a firm belief that everything is going to work out just as it should. For someone with a very type-A personality, it’s not always easy, but she’s learned to surrender to life’s ups and downs with grace and patience.

“Of course plans change and things happen, but I was really given the opportunity to experiment and grow into what I’m doing now,” she says. “This is far from what I imagined in my freshman year, but the biggest thing I’m concerned with is doing what I love. The rest will follow.”