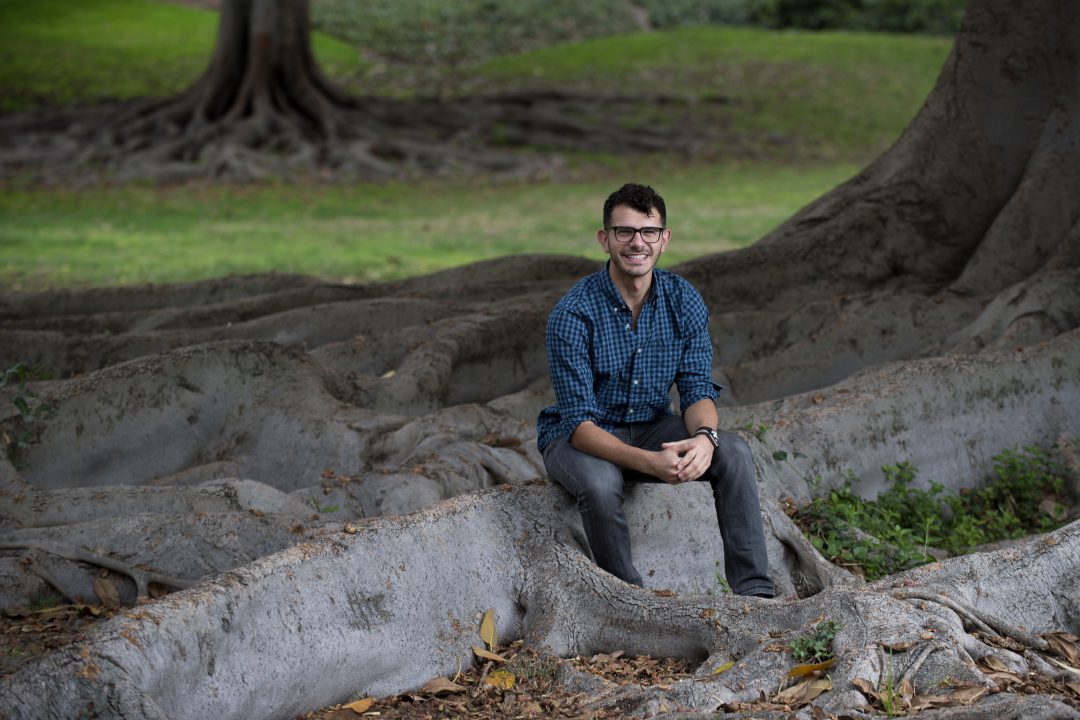 Bringing it all TOGETHER

When graduating senior Andrew Hallak began his UCI journey as a pre-med biology student, he never thought that he would be ending it as a student of the social sciences. He also couldn’t have imagined that the choice to become an Anteater would help him rediscover his Palestinian roots and become the first in his family to visit the region in more than 40 years, or that he would one day be addressing thousands of his peers as a School of Social Sciences 2017 commencement speaker. But Hallak’s university career has been full of unexpected twists and turns, and he’s become an expert at taking them all in stride.

Since making the switch to international studies in his second year, Hallak has had a full schedule. He’s travelled abroad four times with the university, taught his very own class of 20 undergrads about the importance of water as a resource for peacebuilding (he’s still proud that there were several students on the waitlist), and been awarded the 2016-17 Dalai Lama Endowed Scholarship for his Global Partners for Sustainability project. But while he’s enthusiastically thrown himself into the world of social sciences, he’s also been finding ways to integrate his background in the hard sciences, minoring in both urban planning and earth and atmospheric science. This interconnected approach is one that he’s been able to extend to his other scholarly pursuits, and he hopes to use his commencement address to inspire his classmates to think beyond labels.

Hallak grew up in a close-knit family in Lancaster, CA. His Palestinian heritage was something that always interested him, particularly given that both his mothers’ and fathers’ sides of the family fled Palestine during wartime. But as a teenager he didn’t really know how to address those deeper questions of identity. Instead, he focused on his talent for science. He excelled in physics and math, and after seeing his three siblings earn their degrees in “hard science” fields he chose to follow suit. But once he got to the university, it didn’t take long to realize it wasn’t the right path for him.

After joining the on-campus organization Fresh START and programs like the First Year Integrated Program (FIP) on Water as a freshman, Hallak started to think about the larger impacts his future choices could have. FIP in particular helped him realize that he could utilize his talents for science in combination with his affinity toward the social sciences to combat global issues.

“One program that was very influential was Water UCI, led by David Feldman, a professor in social ecology. The way he seamlessly spoke between the social policy implications and scientific findings, it opened my eyes to the fact that I didn’t have to settle on one route or another and that I can do something more policy based and still work in coordination with science,” Hallak says. “From there I started thinking about how I could be a bridge between bringing the scientific aspects to the broader community.”

Instead of being a doctor as he had originally planned and helping on an individual scale, he realized that a scholar, lawyer, or public servant could affect policies or conduct research that could benefit entire populations. He took that spark and ran with it, joining Olive Tree Initiative (OTI) and Students for Global Peacebuilding. He says that these programs, particularly OTI, were transformative.

“That’s when I started to think bigger in terms of what I wanted for myself in the future,” he says. “My entire world view started to change. I became really interested in this idea of water as a resource, especially how it can be utilized as a tool for peacebuilding in conflict regions.”

This idea of water as an instrument for good became the basis of the rest of Hallak’s university career. He became immersed in the idea of sustainability and how our environment can shape all other aspects of our lives. He also got more involved with OTI, joining the group on three trips to the Middle East including visits to Armenia, Turkey, Palestine, Jordan, and Israel. Though his parents were apprehensive about his trip overseas—after all, they had fled the region to escape war and turmoil—they were thrilled when their son was able to reconnect with long lost family members. For Hallak, it was yet another eye-opening experience that made him think beyond the labels things—and people—are given.

“What was most interesting was seeing my cousins around my age in the region and realizing that that could easily have been me,” he says. “But I was privileged to be born in the United States. It made me think about how different our personal narratives are, simply because of where our parents fled decades ago—especially for my family that lives in Gaza or on the West Bank who have limited access to movement or even fresh water.”

These trips were much more than opportunities for family reunions, however. Hallak took full advantage of his time abroad and conducted research on water-based conflicts through the Undergraduate Research Opportunities Program. Upon his return to UCI, he was even able to take what he had learned and teach his very own university class through UTeach, titled “Water and Conflict.” As an instructor, he introduced 20 undergraduates to the idea of water as a resource and how it can be utilized in a globalized world.

But what can be described as the culmination of all Hallak’s hard work and research didn’t come until last fall, when he received the 2016-17 Dalai Lama Endowed Scholarship. The privately funded scholarship awards one student annually for a project proposal that promotes “compassion in action.” For Hallak, that project was Global Partners for Sustainability (GPS), an on-campus organization that fuses his passions for environmentalism, systems thinking, and community. 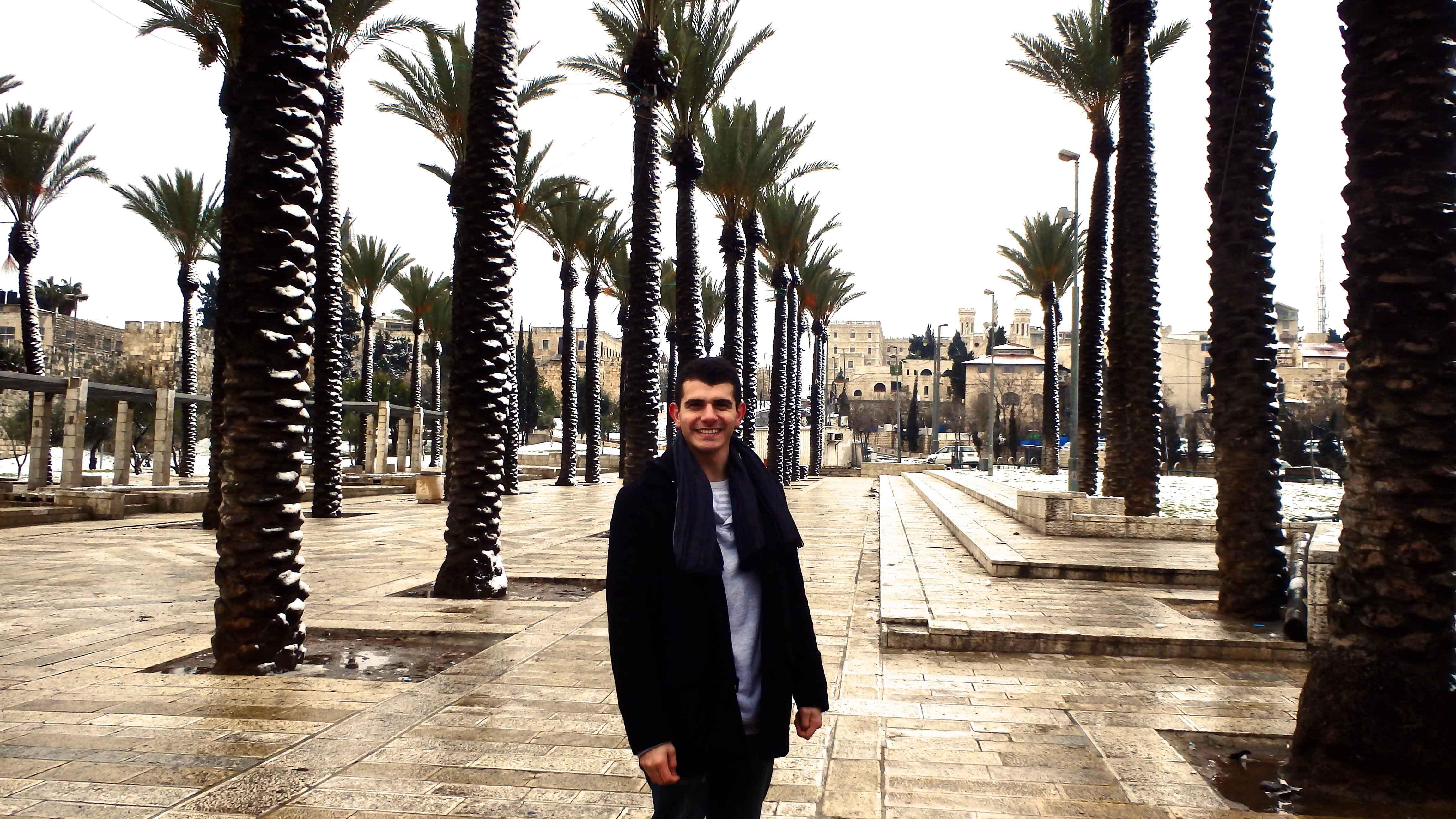 @Jerusalem outside the Damascus gate

I truly see the School of Social Sciences as a driver for innovation and social change.

“With GPS, we use sustainability as an umbrella to connect diverse student groups and centers on campus. We really want to broaden the scope of what environmental sustainability means,” he says.

The goal of GPS is to not only help students realize that acting sustainably is easier than it seems, but to help others see how the environment is intertwined with all aspects of life and how sustainable practices can benefit everyone. It also hopes to break down labels and emphasize that one doesn’t have to be a “hippie” or fall into any stale stereotypes to do something that is good for our world—they just have to be open to a bit of change.

To reach the most students, they are joining forces with various student groups on campus. Most recently, they’ve teamed up with Active Minds and the UCI Center for Student Wellness and Health Promotion to promote the role that environmental sustainability plays in mental health. The groups set up “de-stressing stations” in Aldrich Park every other Wednesday, complete with healthy snacks, art projects, hammocks, slacklines, and more. The partnering organizations also take turns leading workshops and discussions on their areas of expertise, and students have a place to meet new people, learn about new resources, and enjoy some time outdoors. Additionally, GPS is working in coordination with the Global Sustainability Resource Center to launch an Environmental Justice Library, not only consisting of books but also honor theses and dissertations researched by UCI graduate and undergraduate students. Finally, the group is working to create a course that will be offered next fall quarter for incoming undergraduates to help them “navigate toward a greener future.”

It’s a prime example of how Hallak hopes to make change in the future; by breaking down barriers and finding common ground between different groups—first as an environmental lawyer and eventually as a professor. It’s a future he says he would not have found without the School of Social Sciences, and he hopes to impress upon his fellow graduates how much potential they have to make the world better.

“The opportunities presented to me by UCI, and specifically the School of Social Sciences, have shaped my aspirations for the future but also given me the opportunity to self reflect and envision how I can be the most effective change agent in society,” he says. “I want to show my peers that we’ve developed the critical skills to analyze world events and the responsibility to shape the future. I truly see the School of Social Sciences as a driver for innovation and social change.”