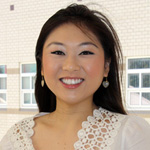 Name:  Kristal Lee
Major:  Sociology
Favorite part about being an anteater: The many on-campus activities that allow students to get involved and pursue their passion
Best UCI memory: The Dean’s Ambassadors Council 2008 Presidential Pancake Breakfast. We treated students, faculty, staff and the community to a free pancake breakfast and projected Obama’s presidential inauguration in live time. It was a festive packed house and we were able to help raise donations for the Hacienda Orphanage in Mexico by making customized presidential and American themed buttons. Professor Petracca even volunteered to flip the pancakes and came dressed in his chef’s attire.

For soon-to-be alumnus Kristal Lee, being a commuter student didn’t dampen her desire to get involved at UCI; rather, the daily drive in from her Chino Hills home fueled it.

“Living off campus made me more interested in finding ways to connect with the campus,” she says.  In her four years at UCI, the honors sociology student has been a familiar face at the social science Dean’s Ambassadors Council events where she’s helped organize community outreach activities for the Children’s Hospital of Orange County, Corazon de Vida Foundation and Kirkwood Senior Home.  She’s helped raise funds and package school supplies for the Baghdad School Project and was the energetic master of ceremonies at last year’s indie rock fundraiser for the initiative.

In June, she’ll be taking the stage as the keynote speaker at the School of Social Sciences’ evening undergraduate commencement ceremony.

“I’m honored to have the opportunity to speak on behalf of social sciences undergraduates and our shared experiences at UCI,” she says.  “The supportive faculty and students in social sciences have been like a family to me and have made the school a home away from home,” she says.

An only child, Lee took advantage of UCI’s many available campus involvement opportunities as a way to extend and grow her family.  In addition to the Dean’s Ambassadors Council activities, she co-founded the Anteater’s Impact Mentorship program which paired local junior high students with UCI undergrad mentors who served as academic role models.  She has also been involved in leadership development organizations as a national ambassador with America’s Promise Alliance and the National Society of Collegiate Scholars.

In the classroom, she maintained a 4.0 grade point average throughout her undergraduate career while conducting graduate-level research alongside Zuzana Bic, health sciences and public health lecturer, and Jeanett Castellanos, social sciences lecturer and director of the school’s Academic Resource Center and social science honors program.

Through research - which she recently presented at the May Undergraduate Research Opportunity Program annual symposium - she wants to influence the development of programs to help educate minorities about health and wellness issues.

“My grandparents don’t speak much English, and when they were diagnosed with cancer, I had to help them navigate through the U.S. healthcare maze,” she says.  “Serving as a translator between different doctors and specialists and hearing my grandparents concerns and fears throughout the process opened my eyes to cultural voids that exist in healthcare knowledge and in the current system.”

Working with Bic and her research team, Lee designed and implemented a corporate health program for a non-profit organization in the heart of downtown Los Angeles.  The program has helped educate more than 300 employees on healthy practices they can apply to their daily lives, and is the focus of a textbook Lee is co-authoring.  Working with Castellanos, Lee focused her studies on Korean American undergraduate health and differences in perceptions of psychological, social, and cultural well-being.

“UCI’s research focus and leading scholars in the field have helped me put my experiences into context and delve deeper into the study of how psychological, social, cultural factors challenge different populations,” Lee says.

“Kristal’s blend of enthusiasm coupled with her scholarship have allowed her to excel in her studies and serve as a role model for her student peers,” says Castellanos. “Invested in contributing to her community, her leadership abilities demonstrate the values of excellence, commitment, strong work ethic, and collaboration with an incomparable positive attitude and outlook.”

After graduating in June, she will spend the next year taking care of her grandparents.  She will then begin a two-year program with Teach for America where she’ll work on a graduate degree in educational leadership and an elementary teaching credential.

Offering a few words of advice to future anteaters, she says, “No matter what your student status, get involved and become a part of the many opportunities available on campus.  You won’t regret the time you put in as it could very well open your eyes to a world of opportunity you didn’t even know existed.”